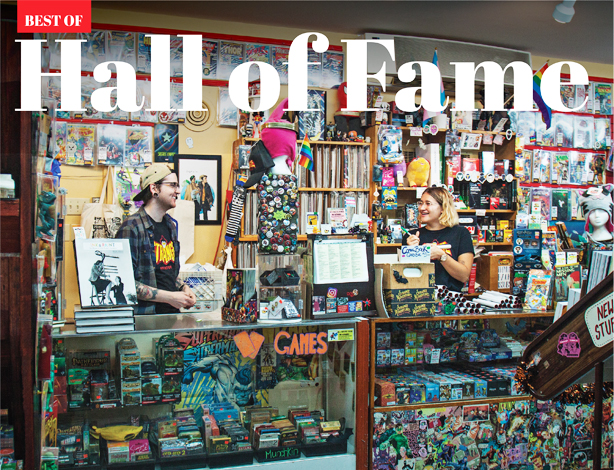 Welcome to the Best of Halifax Hall of Fame

Inflate your massive aluminum thumbs-up balloon and cue the Tina Turner—this is the home of, simply, the best Best of Halifax winners. It’s where we raise their figurative jerseys into the figurative rafters, to be honoured in perpetuity even though they will no longer be able to compete for the categories they’ve consistently ruled.

Let us take you back in time for a moment to explain. In the early Best of Halifax days, the Hall of Fame worked a little differently. Our committee would retire categories that had been so authoritatively dominated they’d become stagnant, rather than ushering the businesses who were dominating them off into the sunset. For example, we retired Best Nachos in 2009 instead of retiring the Economy Shoe Shop from the race, and Best Shawarma in 2014 rather than Mezza Lebanese Kitchen. It made sense at the time, but not so much now.

Since 2016, we’ve done things differently. A business, place or person earns the Hall of Fame entry once it’s won gold in a category 10 consecutive times. This was a way of sending legendary winners to Best of Halifax heaven (where they’d be remembered and celebrated for ever and ever amen) and allowing new, exciting, delicious up-and-comers a chance at victory. It keeps the survey lively and relevant while still celebrating the greatness of the many longtime champs. Places like Salvatore’s Pizzaiolo Trattoria—which was retired from Best Pizza Pie with umpteen wins in 2016—can still win in other categories, just not their Hall of Fame category.

In 2019, we said goodbye to two longtime golden children—Darrell’s Restaurant for Best Milkshake and Boneheads BBQ for Best Ribs. We also welcomed back Best Nachos from its dusty place in the Hall of Fame, celebrating the first new winner in a decade. And, as always, we honour the superpowers of our Hall of Famers—most of which continue to play a role in our city’s awesomeness.­­­ —Allison Saunders

THE BEST OF HALIFAX HALL OF FAME