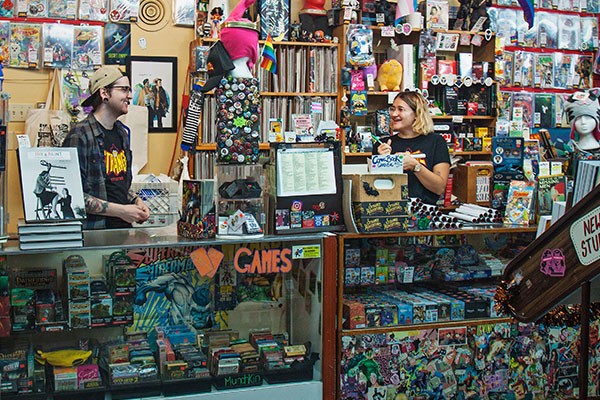 Editor's note: With this 2017 Best Comics Store win marking at least 10 golds in a row, Strange Adventures joins the pantheon in the Best of Halifax Hall of Fame.

The cartoon version of a comic book shop is The Android's Dungeon in The Simpsons, where cranky Comic Book Guy mocks his customers and their purchases. However, that’s “a cautionary tale” to Dave Howlett, longtime manager of real-life Best Comics Store Strange Adventures. “There were stores like that when I was a kid,” Howlett says. “We try to make sure people have a good time when they come to the store. You’ve gotta give people a reason to come in.” Strange Adventures has a bunch of reasons, such as a huge selection of comics; staff whose super power is staying on top of pop culture trends everyone wants a piece of—including that thing that went viral tomorrow; stocking family friendly titles and merch to welcome the next generation of readers; and a willingness to not just encourage female shoppers and artists but to (gasp!) hire women to work in the shop. One more? Because it’s won Best of Halifax gold for more than 10 years, Strange Adventures enters the BOH Hall of Fame, to be known eternally as Halifax’s Best Comics Store. Eat your heart out, Springfield.