The composer/improviser/cellist from New Hermitage's solo work builds richness in its simplicity. 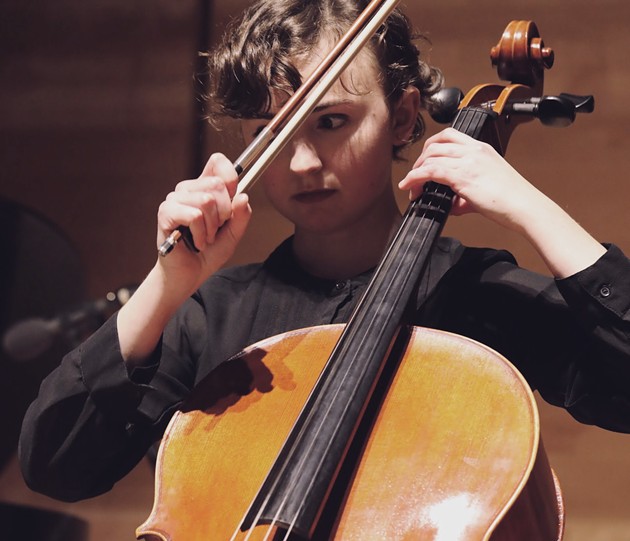 
There’s a scene in the 2007 rom-com Music and Lyrics, starring Hugh Grant and Drew Barrymore, where the two leads have an artificial debate of a conversation that seems to exist only to highlight, underline and hit you over the head with the movie’s title. “Just lyrics?” Says Barrymore’s aspiring songwriter to the washed-up pop star played by Grant. They’re into the wee hours of an all-night writing session, deadline looming. “Lyrics are important. They're just not as important as melody,” he replies. She clicks her pen, countering: “A melody is like seeing someone for the first time. The physical attraction…But then, as you get to know the person, that's the lyrics. Their story. Who they are underneath.” The scene fades with Grant’s character remaining skeptical—and he has reason to be.

When listening to the soft, unfurling petals of a song by cellist/composer/improviser India Gailey—when being carried out to sea by its commanding undertow—it feels impossible to heed any argument but Grant’s fictional one from 14 years ago. This music—a mix of classical compositions and improvisation—is lauded by the likes of Philip Glass and has won Gailey five Nova Scotia Talent Trust Scholarships.

It’s approachable and alive. Even if you think you don’t like classical music or contemporary compositions, with Gailey you will never miss the lyrics.

“Music without words asks us to feel below the head: What are the sensations in our bodies that this evokes?” Gailey (who’s also a member of the experimental classical quartet New Hermitage) says, speaking with The Coast by phone. "It’s more about feeling: What kind of memories does this piece of music bring up? Or emotions? Or sensations? There’s so many things to listen for other than lyrics. What’s the energy level? What’s the density? What’s the colour?”

She pauses. "If this music smelled, what would it smell?” she asks, before laughing at her own question.

When it comes to why she chose the cello, “I liked how it had a more whole-body feel: It touches the heart, it rests on my sternum and it just vibrates my whole body,” Gailey explains. “I just felt drawn to the lower, deeper tones.” Though her early, high school foray into music began with the violin, the progression to a floor-grazing string instrument was a natural one: “My mom was pregnant with me and she just decided that she wanted to learn how to play the cello during that pregnancy,” she adds. By high school,  Gailey “wanted to be like Yo-Yo Ma.”

With strings that shudder (like on her song “Orchid Whale”) and soar (“Winter Music”), the Yo-Yo Ma aspirations seem obvious—as does Gailey’s seat at a table of emerging contemporary non-men composers who paint complete tableaus with a single instrument—like harpist Mary Lattimore.


“It’s not like every note is written out: I have a sort of palate for different sections and if I played it again it wouldn’t be exactly the same” says Gailey, explaining how her improvisations are built. Lately, too, she’s been playing with looping pedals like a guitarist would. The effect makes it feel like she could share the bill with Snailhouse’s Michael Feuerstack.

This Sunday, as she delivers a solo, improvised set as part of the online Open Waters Festival, she’ll be delivering a new set of improvised work inspired by the environment: “This set of improvisations came out of contemplating on a more visceral level of humans as a part of nature—the interdependence of all beings and the environmental phenomena on this planet. Just sitting with that and seeing what sounds came out of it," she says.

The environment “encapsulates all of us as humans,” she adds. “None of us can escape the environment we’re in or that we create together which makes me latch onto it as the most important thing.”

The year the music lived