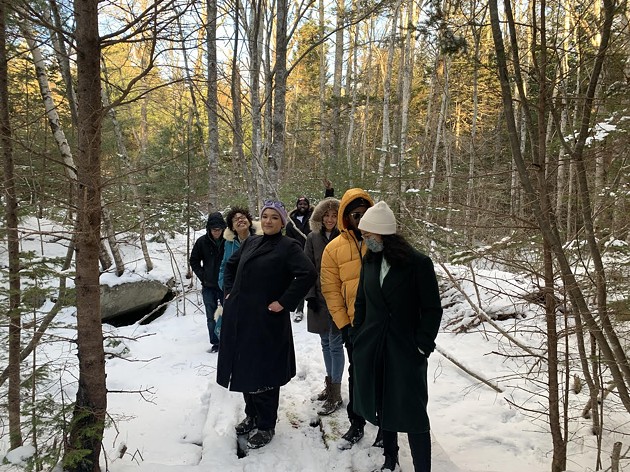 “Why are all retreat spaces owned by rich white folks?” and “Why can’t we own our own spaces?” were the questions Lauryn Guest and Jessika Hepburn asked themselves that led to the initiative Buy Black Birchtown.

When Guest was a child, she didn’t always feel she was prioritized in the camps she attended. “Camps should be fun right? For kids, it shouldn’t bring anxieties or anything like that,” they say. “We just really want to create a safe space we can share with the whole BIPOC community and do Juneteenth celebrations, and talk about the race riots.”

Buy Black Birchtown has recently purchased about eight acres of land in Birchtown across the Black Loyalist Heritage Centre, aiming to start a member-owned retreat centre by June 2021. The group takes ownership of the building in April after which construction will start. “It’s by our community and for our community,” says Hepburn, whose family sold their house in Lunenburg to raise money for the purchase. They’ll be living part-time in Mahone Bay and part-time in Birchtown.

Children running, playing games and cartwheeling, youths in their summer camp, seniors doing what seniors do, campfires and relaxation on a hammock is the vision Hepburn has for the project. “Building those memories together where you come back year after year, summer after summer to have those special times to be with your community, I think that’s the real dream,” says Hepburn, also the owner of The Biscuit Eater Cafe and Books.

Lauryn Guest says the group may have come up with the idea, but they believe the demand was already on every BIPOC person’s heart. “We want to have a retreat for us but it’s like wherever we look, if we’re trying to book a retreat for BIPOC folks, it’s like our safety is not always prioritized and a lot of these retreats are owned by white folks. And then when you get there, it’s more exhausting than it should be. And it’s almost like you need a retreat from the retreat.”

Birchtown being the location for the retreat centre is no accident, as the town has a lot of Black history. It was named after Brigadier General Samuel Birch and founded in 1783. People of African descent who were loyal to the British during the American Revolution were the first settlers in Birchtown. They had been promised freedom and land in exchange for their loyalty but after the war, Britain settled the loyalists in the colonies, largely in Nova Scotia and New Brunswick. Back then, Birchtown was the largest settlement of free Africans in North America and was a shelter for people of African heritage who had fled enslavement and were living in unfavourable situations.

Birchtown’s important history will play a part in the project, where visitors will find themselves at a place of retreat and rest, but also a place to learn about the African Nova Scotian history. “We just think it’s really important to invest back into that community and revive what was lost there and make sure that people know that there is a Black community there,” Guest says, adding that the centre has a trail that leads directly to the Black Loyalist Heritage Centre.

The group is working with SEED, an organization that is working to fight environmental racism, Change is Brewing Collective, a BIPOC organization that promotes diversity and inclusion in the craft beverage industry, writer and filmmaker Liesl Harewood as well as other members of the community.

There’s a Gofundme available for people to show their support. The funds will be used to keep the centre up and running. “There’s two beautiful buildings but people are going to need somewhere to sleep and some extra facilities like that,” Hepburn says. Also, people can purchase memberships for any amount ranging from $0 to over $5,000. “So, people are becoming members who don’t have the financial ability to purchase one right now. And they still are welcome to become members if you’re part of the Black, Indigenous or the people of colour communities in Atlantic Canada,” Hepburn says.

The centre may mimic existing retreat centres, having saunas and camps, but Guest says the vision is to be created with everybody together, “We want everybody’s input,” Guest says.