After 34 years with HRM, urban forester John Simmons makes like a tree and leaves. 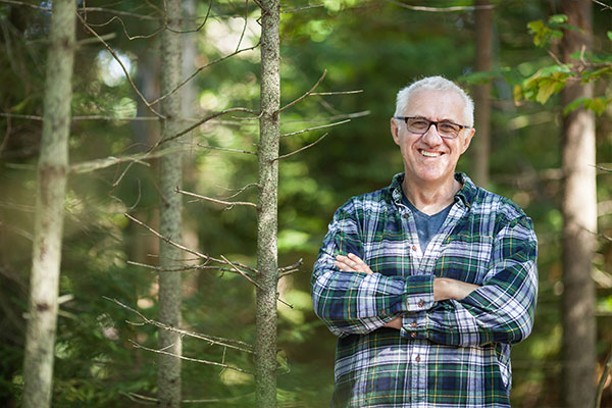 John Simmons was probably an elm tree in a past life.

It would explain why he feels a deep connection to the American elm that stands in the centre of the Public Gardens. Or all of the trees in Halifax, for that matter.

Simmons is Halifax’s urban forester. This means he’s responsible for protecting the nearly 58 million trees in the Halifax Regional Municipality. He’s spent the past 34 years pruning, axing and planting the lush canopy that gives the city its charm.

He doesn’t have the weathered face one might expect of someone who’s spent the past three decades labouring outside. There’s a softness to his features befitting the love he has for his work. His wrinkles are from years of smiling under the sun.

“It really doesn’t matter what question you pose to me, trees are the answer,” he says, during a relaxed stroll through the Public Gardens.

Now, Simmons is retiring. He’s riding off into the sunset at the end of August, leaving HRM with the difficult task of replacing him.

Even when he’s gone, though, his work and his legacy will live on. John Simmons’ stewardship of Halifax’s urban canopy will be felt long after he leaves.

His love for trees started as an 18-year-old, working as the supervisor of horticulture for the city of Calgary. Simmons would spend the warmer months managing provincial parks, planting flowers and upkeeping shrubs. But in the cold Alberta winter, he’d have to go out and prune the city’s trees.

“There was something about climbing a tree, hanging off a rope and pruning that, at the time, when you’re young and you feel immortal, it’s a way to get the adrenaline flowing,” he says. “You’re strapped in a harness, 60 feet in the air and have a chainsaw tied to your hand.”

Simmons, who grew up as an army brat in Ontario, started working with Halifax city hall in the 1980s as a certified arbor—or “tree surgeon”—from the International Society of Arboriculture.

He’s been working here ever since, only stopping for an 18-month period after a fall from a 30-foot white pine in 1995. He didn’t break anything but did suffer some brain damage.

“It is what it is,” says Simmons, about his dangerous vocation. is not the kind of job someone takes if they’re afraid of heights. But some fear is to be expected, helpful even, in such a hazardous work environment.

“If you are ever up in a tree and you’re 100 feet up in the air, moving this 400-pound piece of wood by yourself and your knees aren’t knocking even a little bit, then you shouldn’t be up in a tree.”

Aside from pruning, he’s been protecting Halifax’s trees from all sorts of attackers.

In the early 2000s, the city reluctantly welcomed a tiny European invader: The brown spruce longhorn beetle. The insect ended up munching on tens of thousands of trees in Point Pleasant Park. Simmons scrambled to control the outbreak that was tearing through the park’s spruce trees—quarantining sections to try and manage the pests.

Hurricane Juan ripped through the city with wind speeds clocking in at 160 kilometres an hour. Point Pleasant Park was ground zero. When the category two storm settled, nearly 70 of the park’s trees were gone.

“People were emotional,” says Simmons. “They were teary-eyed as they came in.”
Simmons was surprisingly relaxed about the aftermath. He is a man of nature, after all. And hurricanes are just a part of nature.

He immediately closed the park in order to tend to the more pressing needs of the city, clearing fallen trees for emergency responders and vehicles before turning his focus back to Point Pleasant. The first thing Simmons and his team did was to open a path at the bottom of the park and let curious residents in to see the damage Juan had done for themselves.

“We were going to bring everyone in and show them what of a mess we’ve got and ask for their forgiveness as we clean it up,” he says.

Now, almost 15 years after the hurricane, Simmons regards the cleanup as one of the high points of his career.

“Two weeks after the fact, you’d be walking in the city and asking, ‘What hurricane?’”

Should Halifax ever get hit by another hurricane of similar destructive force, the new forest that has grown in Point Pleasant should prove more resilient. It’s “wind-proofed” through strategic planting, using a mix of evergreen coniferous and leafy deciduous trees.

“Trees are the only piece of infrastructure that increases value over time.”

But Simmons says this is all a fallacy. The park might be “wind-proof,” but if an ice storm ever rolled in? The broad-leafed trees are screwed.

“Any time humans intercede in an ecosystem, I think we undervalue the intricacies of the process,” he says. “We don’t quite understand all the implications of doing things one way, compared to another.”

That knowledge gap is something Simmons had to bridge often while working with the city. Take, for example, the highly invasive Norway maple.

In the 1950s, many of Halifax’s trees were being killed by Dutch Elm Disease. To mitigate the risk, the city planted hundreds of Norway maples to replace the dead wood.

For the most part, Simmons is an easy-going guy. But his mood sours when asked about those maples.

Though they stand tall today, predominantly in the city’s north end, the Norway Maple comes with many structural issues. The species is known to choke itself off with its own roots. When they’re as young as 30, large branches will begin to crack off.

To combat the failing maples, the city has spent the past few years planting over 90,000 new street trees in Halifax. The most recent additions have been along Argyle Street, which is something Simmons is quite proud of since the area is mostly concrete.

By using what’s called a silva cell—an under-layer of the sidewalk that serves as a foundation for soil and trees—Argyle is now home to young oaks, lindens and ginkgo trees.

“It’s just by luck that our city has evolved at a slower pace so we really haven’t out-engineered our ability to grow trees.”

According to Simmons, Halifax has the ideal environment for growing an urban forest. The city has the right mineral content and the soil is young and soft so it’s easier for trees to take root.

MEGHAN TANSEY WHITTON
Simmons on a stroll through Point Pleasant.

All of this information is outlined in the crowning jewel, the pièce de résistance, of Simmons’ career—the Urban Forest Master Plan.

This 460-page document was assembled in 2012 by a 17-person team of experts from the HRM and Dalhousie University. Its goal is to ensure a sustainable future for our urban forest. Maintenance for the canopy, which involves a process called cyclic pruning that trains the trees to grow around things like power lines, is also outlined in the plan.

The UFMP also shares statistics and data regarding Halifax’s canopy in order to educate the public on the intrinsic value of our trees.

“Trees are the only piece of infrastructure that increases value over time,” says Simmons, who adds that for every dollar that is spent on planting a tree, a city will see over $7 in return.

In the HRM, it’s estimated that street trees provide about $2.1 million annually in stormwater reduction services. Research from Dalhousie also shows that HRM’s street trees save $12.4 million in energy costs each year.

And there are many more benefits to our urban canopy. By providing shade for the streets, trees increase the longevity of asphalt, reduce crime and calm traffic.

They improve our air quality, provide homes to adorable critters and during a downpour can absorb the first inch of rainwater, preventing floods. A well-developed canopy also increases property value. Studies have shown that one mature tree on a property can increase its value by 15 .

By implementing the UFMP, Simmons has helped safeguard the direction of HRM’s urban canopy for at least the foreseeable future. That fact comforts Simmons as he plans his departure.

He knows that council has the information needed to keep the canopy growing.

“It’s not a rigid plan,” he says. “It’s actually a plan that’s meant to evolve. Whoever picks it up from where I leave will have that framework and the direction of council.”

Who exactly will replace him hasn’t been named but the search is well underway. Simmons hopes whoever the next urban forester may be, that they’ll have ambitions beyond what’s been accomplished by their predecessor.

“You don’t want another John Simmons. You really don’t,” he says. “You want someone that’s passionate but you want somebody that wants to move the goalpost a little further along.”

His love for the forest he’s tended to is palpable. During the stroll through Point Pleasant, he stops mid-sentence to address a dead branch that shrivelled up on a young or ornamental pear tree.

When he retires, Simmons will miss the exquisite specimens the city has grown. But don’t worry, he isn’t feeling too about his departure. He’ll be moving into a two-bedroom house in Spain and jetting off to the Mediterranean shortly after August 31.

Simmons’ unrelenting appreciation for nature is part of his reason for retiring. At only 58, he says he’s got another good 10 years to see all that he can of this world’s natural wonder.

“As much as we have damaged it, it is still so beautiful.”


***
Jennifer Lee is a freelance writer in Halifax.