Be the first to preview Zuppa's new production at the Pride Week theatre fest. 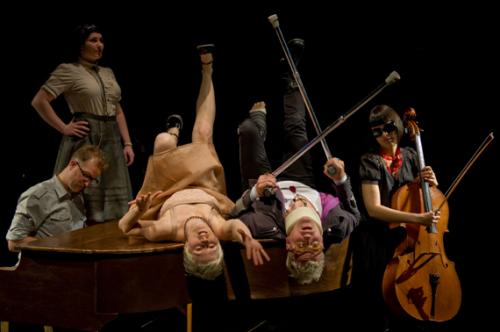 There will be rainbow-infused drama on Gottingen as Queer Acts, Halifax Pride’s first mini-theatre festival, kicks off. Hosted at the Bus Stop and Paragon theatres from July 20-24, five productions are running through the week, including two from Toronto’s famous Buddies in Bad Times Theatre. See halifaxpride.com for the line-up.

Very Secret Ceremony, a new 15-minute Zuppa Theatre Co. production, was “devised from choreography by Verve Mwendo,” and stars Susan Leblanc-Crawford, Ben Stone and Stewart Legere. That’s an obscene amount of talent. The plot is all Zuppa: three former schoolmates—-a baseball champ, a prom queen and a drag queen—-reunite before the end of the world. Director Alex McLean says that it “will eventually be developed into our new full-length show set for 2010,” so go now and be all “I was there when…” The show, on a double-bill with the coming-of-age Obaberima, runs July 20-22, 7pm at Bus Stop. Tickets are $10-$15.

Check back here for reviews.