Halifax has a thing for the BC band that’s playing the biggest gig of Canada Day weekend. 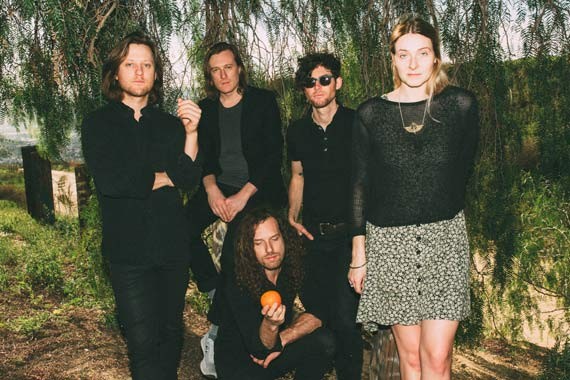 Jeffrey Innes lives on Galiano Island, accessible via small car ferry or floatplane from Vancouver, "home to a thriving community of artists, musicians, poets and craftspeople whose work captures the beauty and spirit of Galiano," as declared by its chamber of commerce. He's forced to stand in one place to maintain his cell phone connection, and at one point suddenly stops talking: "A bald eagle just flew by my window!"

Innes is the lead singer and songwriter of Yukon Blonde, and today "I'm home for the first hour in three weeks," fresh off a US tour. It makes sense that he would set up a quiet home life geographically close to a major city but far from its distractions, as well as those offered by his job. It's a year out from the release of his band's third full-length, On Blonde, a catchy batch of synth-laden singalongs, and this Canada Day marks the five-piece's fourth huge show in Halifax in the same window: It performed a pair of blistering sets at Hey Rosetta's Cohn shows last fall, then came back in March to sell out the Marquee. People love this band—a decade into its existence.

"It feels like a slow and steady kind of...ascension? I don't know. I feel like we got a lot of really good reactions," says Innes. "It's really nice to play in cities where people know your songs. There's a lot of songs people know from this record but not the other two."

Yukon Blonde has shifted its sound in ways dramatic and subtle over its three full-lengths, from the harmony-laden self-titled debut in 2010, which evoked Fleet Foxes, to 2012's Tiger Talk, which let in more post-punk. On Blonde is a mish-mash of lost John Hughes soundtrack songs, packed full of '80s synth parts, clean drums and earworm lines like "Well I'm bitter/and she's all la-la-la/ah-la-la-la/ah-la-la-la/ah-la-la," from the single "Saturday Night."

His current favourite live cut is the mid-tempo "I Wanna Be Your Man," a bombastic guitar-rock jam with a simple chorus: "You mean a lot to me/I wanna be your man." "When I demoed it I did it as kind of a joke. It seemed like Blur's 'Song 2,' they said, 'This is what's going on in popular music' so they just made kind of a sterotypival Britrock song," he says. "It's T. Rex-y, it's the only song on the record like that. I was like 'Let's record it, maybe we can make it cool.' It took a really long time to grow on me. But I love it."

In 2010 Yukon Blonde was named one of the top 10 bands destined to break by CBC, and in 2013 nominated for Breakthrough Artist of the Year at the Junos. Since On Blonde's release last year the band is as busy as it's ever been—has that breakthrough come?

"No!" Innes exclaims in his affable way. "We've had a song on the radio stall at 11. We haven't even gotten to the top 10. We had two songs from this one get to 11 and one from Tiger Talk. That's the breakthrough to me, get top 10 on the radio and get a sold-out show anywhere—anywhere—in the United States—that would be major headway. But none of us have any money and we don't wanna go back to school, so we're here for awhile."