You can probably forget about that giant waterslide, Halifax | News | Halifax, Nova Scotia | THE COAST

You can probably forget about that giant waterslide, Halifax 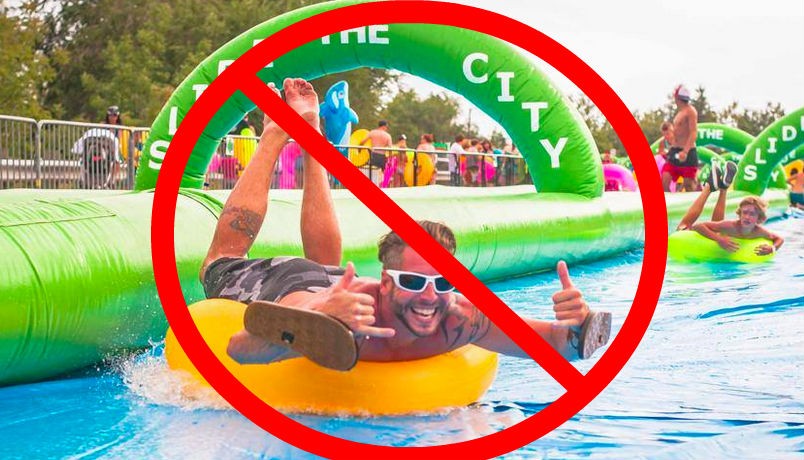 via Slide The City on Facebook.
Slip, sliding away...

A giant waterslide down Citadel Hill was a dream too beautiful for this world. Turns out Slide the City’s previously announced urban waterpark pop-up has been delayed indefinitely.

“We are beyond bummed to announce this, but we have to postpone Slide the City Halifax,” reads a Facebook post from the company that was published Saturday. “Due to road construction in the immediate vicinity of our slide location on Citadel Hill, the slide would have to be shortened to a length that isn't acceptable for a Slide the City event. We pride ourselves on being the world's longest slip n' slide and aren't going to deprive you of the full Slide the City experience.”

The company’s statement says organizers are working with the municipality for viable alternative locations, and will have an update one way or another in 10 to 14 days.

“If at the end of that time we don't have a new plan in place, we will be providing full refunds to everyone who has registered.”

The 300-metre waterslide extravaganza was supposed to take place this coming weekend. The American slip-n-slide company has been taking online registrations for the Halifax event for months now, with early bird tickets already sold out. Prices ranged from $12 for a single slide, up to $55 for a “super slider” unlimited pass.

Slide the City blames the construction around Citadel Hill (part of the new North Park roundabout) for causing the postponement, but up until this week the company still hadn’t secured the Hill for its event—despite months of advertising the location.

Negotiations with Parks Canada to use Citadel Hill were still ongoing as of July. Government spokesperson Jessica Brown told Metro’s Stephanie Taylor late last month that nothing was “set in stone” and plans were “still in the works.”

The American company seems hit or miss for events this summer. A Slide the City event this past week in Duluth, Minnesota was abruptly cancelled, with organizers blaming a delay in permits. Duluth officials claimed a change in franchise owners caused the pullout.

An event last month in Hampton, Virginia also prompted angry calls for refunds after more than 2,500 people were kept waiting for hours for the water to be turned on. The local health department had advised that chlorine levels were too high, but Slide the City organizer Whitney Ashby told local press the company “thought it would be okay because it’s a slide and not a swimming pool.”

The long, hot wait caused more than 20 people to be treated for heat exhaustion. Then, once the water was flowing, portions of the vinyl slide weren’t properly lubricated (causing some sliders to walk part of the distance).

In Canada, a Slide the City event in Nanaimo, BC was cancelled last week in order to conserve water. Nanaimo’s city cancel decided to pull the plug on the waterslide during the worst drought conditions the area has seen in years.

Slide the City estimates it uses between 9,000 to 20,000 gallons of water a day during a waterslide event (or about as much as a backyard pool).

It’s not all bad news for the waterslide company, though. In Toronto this weekend, thousands waited for hours in the summer heat to take part in the slide experience. Summer plus water is usually a winning equation like that.