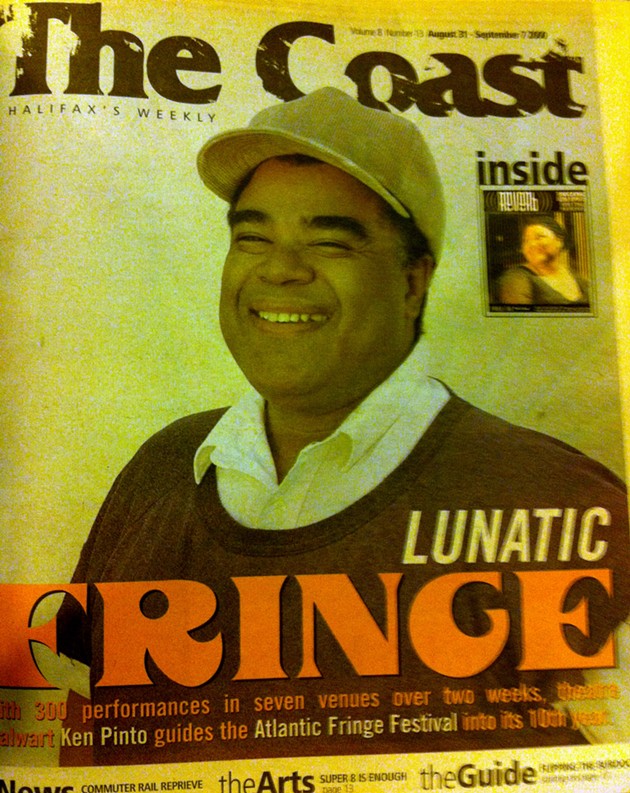 Part of the 2020 Fringe Festival is celebrating past fests, so here's a Coast Fringe cover from 20 years ago.
Last year, a hurricane tried to stop Halifax Fringe. This year, a global pandemic attempted. But, the resilient theatre fest is rolling on regardless, celebrating its 30th anniversary with a full month of shows all September long.

"I always say the amazing thing about the Fringe is that it's like a cockroach. We’ve certainly had lots of struggles over the 30 years it’s existed," says Halifax Fringe Festival executive director Lee-Ann Poole, speaking by phone. "Even if everyone who produces it now suddenly moved away and didn’t want to do it again, next September what would happen is a Fringe Festival: Like, someone would put it on in the basement of The Bus Stop or whatever, even if the funding was cut." While thankfully that vision isn't a reality, knowing the boundless spirit of the scrappy-in-the-best-way fest feels soothing during these times. As Poole puts it, Fringe "is really by the community for the community."

This year's fest programming (which is being unveiled over on Halifax Fringe's site) will feature a mix of online and IRL outdoor programming—everything from a show tune sing-a-long on TikTok, to Hello City making improv out of old Fringe play synopses at Point Pleasant Park. It's also big on celebrating Fringe's legacy, so get ready to share your memories of festivals gone by on social media.

Another big part of the fest's 30th trip 'round the sun? Live recordings of plays from Fringes past, like the redux of Two Planks and a Passion Theatre's inaugural show (which originally happened at the 1992 festival) and Simeon Taole's award-winning The Space Between, which showed at Fringe 2016 before playing off-Broadway.

"To be honest, I think in the theatre world we have a pretty unhealthy attachment to the phrase ‘the show must go on.’ Like, someone could get the worse news of their life and that actor would still go on stage that night," says Poole. "I don't know with the state of the world that necessarily the Fringe had to happen, but maybe that’s why it does have to happen: There is an importance to art just for art’s sake and expressing yourself for the sake of expressing yourself."