Write For Your Life, that’s an order

Doppler Effect Production Society’s fundraiser pits all manner of wordsmiths against each other in battle. 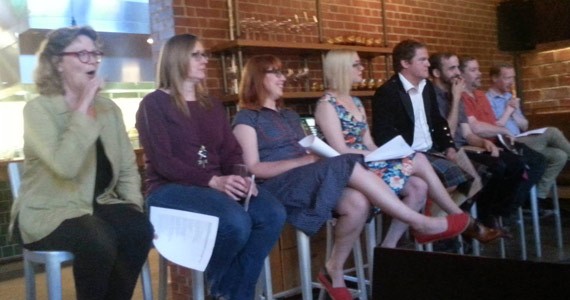 There will be blood. Well, maybe not blood, but as far as fundraisers go, Write For Your Life! offers some pretty heated competition.

The event raises money for The Doppler Effect Production Society, a not-for-profit theatre company that has produced nine original works—including the Coast readers' favourite play of 2014, Tribe of One—since it was founded in 2010. "We were looking for a fun fundraiser that would bring together different groups of artists," explains Doppler Effect's creative director Michael McPhee. "We put the call out for contestants who work in different genres of writing like comedy, literature and theatre."

The Mortal Kombat-style tournament, being held at the Agricola Street Brasserie on March 8, begins with eight writers who face off in pairs by delivering a pre-prepared piece of writing on a pre-assigned topic. One writer is eliminated from each pair based on referee Kevin Kindred's trusty applause-o-meter. The next round is a more daunting one for contestants: the surviving four authors are given a new topic and have just 20 minutes to prepare a piece.

"This is where the magic happens," says McPhee. "I think the time constraint allows the writers to be more free."

The last round throws in a twist that prevents the audience from being certain of whose writing is whose: a pre-written piece by each of the two finalists is delivered by a secret special guest.

The result is an evening that McPhee describes as an interactive and irreverent way to celebrate writers and writing.