In honour of the Fat Wrecked for 25 Years tour’s Halifax stop, Joey Cape reflects on the past quarter century. 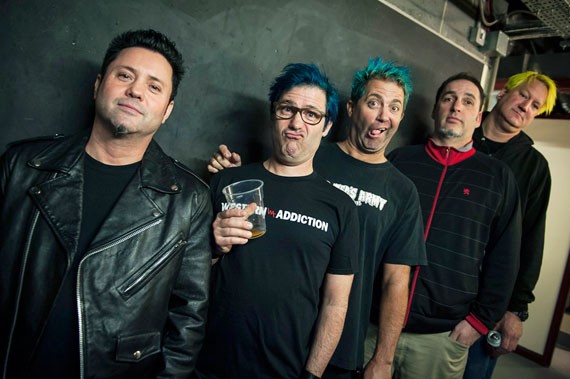 Better break out the white glue and start spiking those mohawks, because Fat Wreck Chords' 25th anniversary tour, Fat Wrecked for 25 Years, arrives in Halifax on August 10. In light of this exciting moment in Haligonian punk history, it seemed prudent to catch up with Lagwagon head honcho, Joey Cape.

So, how have things at Fat changed in 25 years? And do you think they've been for the better, or worse?
Well, things change of course, but in the grand scheme of things those changes are mostly ineffectual, or personal and private. The important bits remain the same. Fat is a label made up of people I consider to be close friends, people I spend time with outside of work, people I trust and care about. It's always been a source of comfort and respect for me. Some employees and bands have come and gone but that is both sad and OK. Another constant has been the integrity and conviction—two elements essential for survival in my opinion.

Big punk bands often skip Halifax, and now sometimes even Canada in general—why do you think that is?
I have no idea. Canada in general has always been great to my band. Halifax, along with many other towns, has been passed over by my band and all I can say about that is that these decisions come from agents and local promoters. We are left with a list of choices and some cities are rarely on the list.

What have your previous experiences in Halifax been like?
The last time was a festival with The Vandals, Propagandhi and Rise Against. It was a great bill and a really fun night. Many of us ended up at a rustic bar, drunk, singing karaoke. It rained like mad that night and it didn't faze us.

What are some of your best memories over the years of working with Fat Wreck Chords?
I was once employed by Fat, way back in the early '90s. My title was Trash Boy. Not really, but it might has well have been. Really I was the shipping guy.

As far as a setlist goes, will it be kind of a legacy set because of the whole anniversary aspect?
It's a surprise, but I think we will have announced by the time this is out there. I think it's OK to say we are playing an old album in its entirety.

What part of this anniversary tour are you most stoked about?
Our set. It is something we haven't done in many years, and rehearsal was fun. I imagine it will even more fun to play live.