Downtown business says its sales are down 50 percent since disruptive streetscaping project ruined the summer. 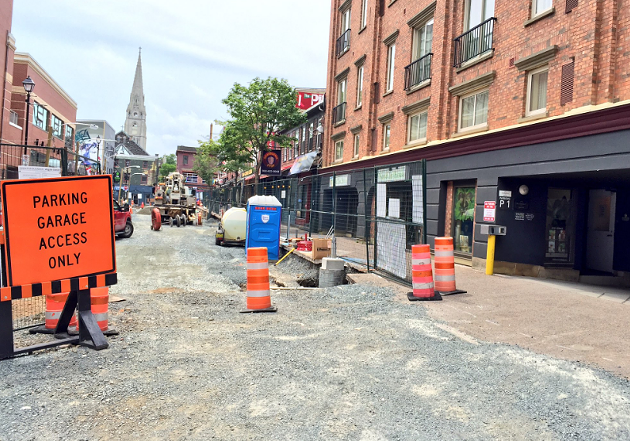 VIA TWITTER
Construction workers buy very little loose-leaf tea.
Argyle is open for business, but you wouldn't know it from the look of the place, and that's causing problems for the street's storefronts.

“PLEASE help us survive,” the World Tea House screamed on Tuesday into the void of Twitter.

The business is currently treading water on week six of the much-feared Argyle Street beautification project. When it's completed the new-and-improved downtown block will be one smooth, mixed-use space between Blowers and Prince on Argyle, and Prince and Carmichael Streets on Grafton.

But that's months away. Right now, torn-up roadway and chainlink fences are choking off Argyle Street from wandering customers and suffocating businesses in the heat of what's supposed to be a busy shopping season.

“Sales down 50 percent and we are already struggling to stay open,” the Tea House pleads. “Help.”

Coupled with the meteoric disruptions of the Nova Centre, the construction along Argyle has already depleted Halifax's former nightlife main street of several hallmark bars and caused extended woes for other shops and restaurants.

One of those businesses, the Wooden Monkey, is suing the municipality and Argyle Developments Inc. for over $500,000. It's one of companies—including Biscuit General Store, the Carleton and the Economy Shoe Shop—planning legal action over the impact of the convention centre's construction.

The Argyle streetscaping project is expected to last another 11 weeks or so, and finish up near the end of September (provided there are no delays).