Wonder’neath it all | Arts + Culture | Halifax, Nova Scotia | THE COAST

The collaboration 2482 Maynard provides a new path forward for the Wonder’neath Art Society—and for Halifax’s visual art community at large. 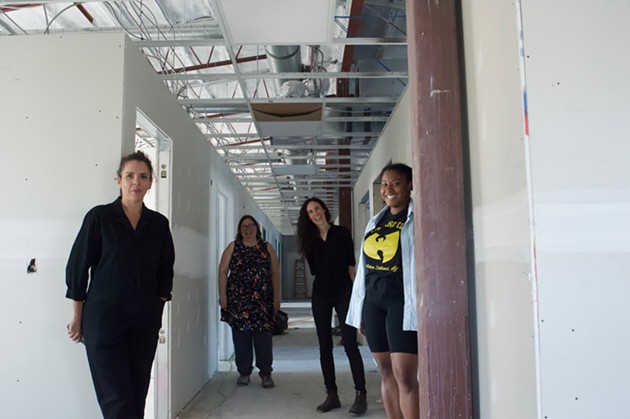 Morgan Mullin photo
Artist Emily Falencki, artists and Wonder'neath co-founders Heather Wilkinson and Melissa Marr and artist/Wonder'neath board of directors president LaMeia Reddick took The Coast on an exclusive tour of 2482 Maynard this week. The new arts space will open sometime this fall—perhaps as early as September, they estimate.

That place, of course, is the Wonder’neath Art Society—and this fall, magic is getting a new address.

The new space—located at 2482 Maynard Street, and part of the collaboration called 2482 Maynard—will allow Wonder’neath to escape the lease insecurity that has plagued it (and many arts organizations city-wide) for years—while also offering the artist-run charitable society more space for all-level community programming.

As a press release issued to The Coast puts it, 2482 Maynard will be “a 10,000 square-foot visual arts facility in the north end, dedicated to providing reliable, accessible studio space for a variety of artists, gallery exhibition space, and neighbourhood arts programming for all levels of artistic practice.”

The vibe onsite is high-ceilinged and airy, with a space on the right-hand side of the main floor where Wonder’neath programming like Open Studio (a weekly drop-in program that’s on hold until COVID-19 is over) will be held. To the left is a gallery filled with soft sunlight—and work for sale from a host of local artists.

The idea for Falencki's collaboration with Wonder’neath took seed almost a decade ago when she began to witness—and get swept up in—the cycle of artists’ spaces being “bought, developed and [the artists getting] displaced.” She approached the society last fall to formalize a plan for what would become 2482 Maynard—a bit of timing that Wonder’neath co-founder Heather Wilkinson says was “magic,” as another deal for the society had just fell through.

“I would say you can count on one hand the number of spaces that are actually suitable on the peninsula anymore; those spaces are going permanently. So if you want to keep artists in Halifax, we need to make a commitment to space,” adds Wilkinson, by way of explaining the collaboration’s importance. Says Falencki: “For me, it’s going to be really magnificent to see artists use that space…and to supply some space where artists can make some money, can sell their work. I think there’s a market for that here and I think if they have that big, beautiful room to showcase stuff it’s gonna be really great to watch.”

Upstairs at 2482 Maynard, light cascades through the windows as Falencki, Wilkinson, Wonder’neath cofounder Melissa Marr and LaMeia Reddick (president of the Wonder’neath board of directors) name off what the newly-drywalled spaces will become: There are studios set up for use by professional oil painters, complete with proper ventilation (a rarity in the already rare world of rentable space for visual artists); another room will be the first fully accessible darkroom east of Montreal. The community that will foster through artists of all practices working alongside each other is already tangible as a building crew wanders by with planks of particle board.

“I’m excited to see what it means when Wonder’neath has a storefront or street front, that that presence of Wonder’neath is going to be felt and seen by all kinds of people. And then, when there’s a Black woman outside making a painting, another Black child will be like ‘oh, whatcha doin’?’,” says Reddick, walking away from the building site. “So I think there’s this really beautiful opportunity for Wonder’neath now to be in a position where they can show the essence of how beautiful the programming and how beautiful the people who work here are—and really truly making the commitment to accessibility for everybody—and access. Like finally, an accessible art space.”

In an era where accessibility has become a buzzword, it’s worth remembering that Wonder’neath has been here, in Halifax, doing this work since 2010, always evolving its offerings based on community feedback. At 2482 Maynard, that looks like accessible, gender-neutral washrooms on each floor; a quiet room to support participants with sensory needs and powered entrance doors and lift access to the upper level that accommodates mobility devices—to name a few.

While the space won’t be open until at least late September, the word “possibilities” keeps being bandied about as Marr, Wilkinson and Falencki later discuss the surging sense of optimism their collaboration brings.

As Wilkinson sums it up, at 2482 Maynard “We’re really thinking through: How do we build this space to make the best studios? To bring people together? To have a public community art space that can really accommodate people? How do we collaborate with other people? How do we set this up as a space that really encourages collaboration? I think the possibilities are just gonna be so exciting.”