Without him | Arts + Culture | Halifax, Nova Scotia | THE COAST 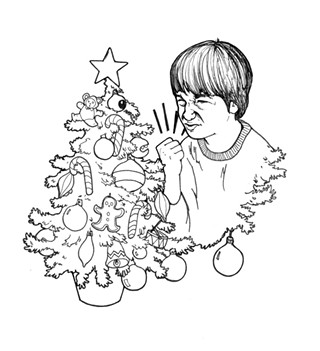 My son Joey's so little, he's resting his chin on the kitchen table, eyes slightly crossed as he manoeuvres a spoonful of Rice Krispies toward his lips.

He blinks at his bowl with sleepy eyes. I want to brush his dirty-blonde bangs out of them. "Yeah, ma," he says, hoarsely.

"Did you put baby Jesus in the toilet?"

Joey isn't looking my way—he's in his breakfast trance, and there's a little milk drool running down the side of his chin.

"Nope," he mumbles, between crunches.

"Joey, someone put baby Jesus in the toilet. I don't think Rita would do it." Rita, our adopted greyhound, is as skeletal as an Auschwitz survivor and lying on the braided rug in front of the stove. When she hears her name she puts her chin down on her front paws and looks up at me with eyes like an oil spill.

"Well, baby Jesus stays on the table from now on with Mary and Joseph." Joey ignores me. I hesitate for a moment. "Baby Jesus can't swim, you know."

Joey stops chewing. His eyes are focused somewhere on the far wall. I feel instant regret.

Weirdly, I love nativity scenes. I thought about collecting them once, but worried that people would think I was some kind of religious nut. Then, five years ago on Christmas day, Joey was born. It seemed appropriate to have one. Joey used to like to play with it, but this year, he's ignoring it.

The next morning, baby Jesus is still on the coffee table, but Mary and Joseph, the three wise men, and even the sheep are placed with their backs toward him. A shunning. Poor baby Jesus. I pick up all the pieces and place them on the mantelpiece. Baby Jesus in the cradle with Mary and Joseph, the livestock kneeling beside them, and the wise men and the angel in the back. Satisfying somehow, but also alienating.

When I pick Joey up from the daycare after work, he's sitting on Mrs. Sandstrom's lap, his face streaked with tears. Mrs. Sandstrom, stocky and pale blonde, looks at me mildly, and Joey buries his face in her shoulder. "What's this?" I ask. Mrs. Sandstrom rubs his back. "Joey had an upset," she says, gently reproaching me. "He had a fight with the Christmas tree."

I look over to where the slightly bedraggled fake tree stands. A string of purple tinsel, the old-fashioned kind that reminds me of a glamorous feather boa, lies on the floor. I can picture Joey, his face red and wild, unwinding the tinsel off the tree and around his small body, like thread from a spool.

We drive through McDonald's for supper. Rita lies still in the back, barely raising her head at the smell of salt and grease, though her long whip of a tail begins to thump against the seat. Joey likes to eat the French fries first, before they get cold. In the rearview mirror, I watch him gazing out the window, feeding Rita a fry. The streetlights shine off the tear streaks, like the silver trails that snails leave behind.

That evening, after I've sent him to brush his teeth, Joey pads into the kitchen in his blue fuzzy pajamas with feet. Dazed, like he's just woken up. I feel a pang of something. He's wispy, amorphous, like his father. Barely there, and disappearing.

With a desperate surge of warmth, I pull him into my lap. He doesn't resist, but he doesn't look at me either. "Joey," I say. "Let's write your Christmas list for Santa." I kiss the hair over his ear. Joey tugs away. "No," he says.

I just sit there, my arms around his chest. "But then how will Santa know what to bring you?" I ask, lamely. Joey shrugs and snooks, wiping his runny nose with the back of his hand. "I don't care," he says. "I hate Christmas." I look at his face, so small and pale. Then he goes limp, like he's giving up. "Ali says Jesus hates me."

Ali is a boy as small as my son, with huge brown eyes, and a high bleat of a laugh, He's smart and funny and Joey adores him. "Ali says I don't have a father so that means I'm a bastard." I can tell that he's never heard the word before now, and it's an ice pick to my heart.

"Ali says I'm going to hell." Joey puts his face in his hands.

Then I remember. "Joey." His face is still covered. "Did you know that baby Jesus didn't have a father either?" He stops breathing. "I mean, some people say god was his father, but I don't believe in god." I hear him gulp. "And if there's such a thing as god, he's probably like the wind. On a windy day, everyone's hair gets mussed, not just some people's, you know?"

What am I saying? Joey nods, confused.

But he wants to trust me. He snuggles in, and Rita comes and leans against us.

We invite Ali to Joey's birthday party on Christmas Eve. Ali's mother, Mrs. Fashad, looking exhausted, sits beside him, wiping icing off his face. He pushes her hand away. She's pregnant, I notice. We smile at one another. "My husband left me," she says, in her thick Lebanese accent. I feel stricken, again. "When?" I ask. "Last week." Ali is telling a joke and Joey screeches, floppy with laughter. Mrs. Fashad points to her son with her eyes. "He's so angry at me," she says softly.

Rita puts her head under Ali mother's hand, and rubs it back and forth. Mrs. Fashad smiles. "What's her name?" she asks. "Rita," I say. She looks into those orphaned eyes. "Saint Rita, thank you." Rita, patron saint of baseball and impossible causes, smiles her doggy smile. Her tail's a window wiper, wagging away our sorrow.

Anna Quon is a writer and writing group/workshop facilitator in Dartmouth. She has self-published four small collections of poetry and has a novel simmering on the back burner.