The generous spirit of Winnie Bowden

The life-long northender carries on her best friend’s legacy by bringing her neighbours together for songs, snacks and camaraderie. 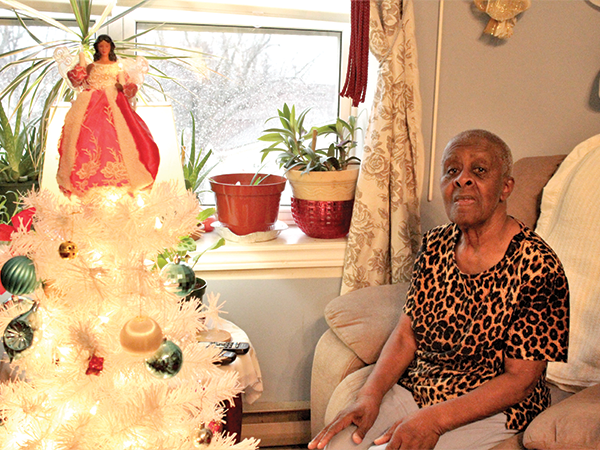 VICTORIA WALTON
Winifred Bowden is the glue that holds the community together at Acadia Lodge North.

Winifred Bowden is 91 years old. She's the longest-term resident at Acadia Lodge North on Devonshire Avenue in Halifax—the only one who's been there since it opened over 30 years ago.

"When I moved in here, we were all like one big family. We had games, parties and we socialized together," says Bowden, who goes by Winnie to everyone in the building.

She's the organizer of Acadia Lodge's annual pre-Christmas tea. A poster in the lobby advertises the event as "light snacks, music and laughter with friends."

But for many, it's much more than that, it's a chance to enjoy what may otherwise be a lonely December.

"I'll sit out in the hall for about three hours, and we talk about different things and carry on," says Bowden, who is quite evidently the life of the building. The event will be held in the "big room" on the first floor this weekend.

Last year was especially tough as Bowden's closest friend Evelyn passed away. The two grew up together on Gerrish Lane and had known each other over 80 years.

"We lived next-door to one another. I used to call her my sister and she would call me her sister," she says. This is the first year she's planned the event alone, but part of the reason she's continuing it is to remember Evelyn's legacy.

"By me doing this, the tea, I feel like I'm doing something for her now," she says. "I still think that she's here, continuing on this tradition that I had with her."

The children's choir from the New Horizons Baptist Church will sing carols, and Bowden is making everything from blueberry muffins to gingerbread cookies and gift bags for everyone to take home.

"Where she's older than the majority of us, she still brings that flavour of old Christmas, how they do things different," says her daughter, Jessica Bowden.

She's no taller than five feet, but the nonagenarian makes herself known. The 91-year-old does all her own cooking, still occasionally sings in her church choir and is an avid knitter.

"Everybody says I always know when Winnie's home cause she's got her music going," she says, laughing. "Every day I say that it's a blessing to be alive at 91, and still able to do my own housework and go out and come in."

Inside her red-accented kitchen, Bowden shows off her banana bread and shortbread cookies.

"There's one gentleman here, he said 'Thank you Winnie for your banana bread, my mother used to make the same kind,'" she says, revealing her secret. "I put cranberries into it."

Bowden's daughter has helped make and put up the posters in the hallways and in the adjacent Acadia Lodge South. She expects about 15 people to show up, but Jessica insists it'll be closer to 25 once word gets around. All the supplies for the party come out of her own pocket.

"We were down there yesterday talking and one lady asked me, 'I've got five names, are they able to come?'" Bowden, of course, says the more the merrier. For the few residents who aren't mobile, she is even taking homemade baking right to their rooms.

"We made a bag up for them and we're going to get a tray and get different types of cookies and cake on it and take it to them," she says.

She says it's in the spirit of the season to be able to provide something for others. "I give it away," she says. "And I feel good when I do that."