Will Wayne Anstey, city's top staffer, be fired for this? | News | Halifax, Nova Scotia | THE COAST

Will Wayne Anstey, city's top staffer, be fired for this? 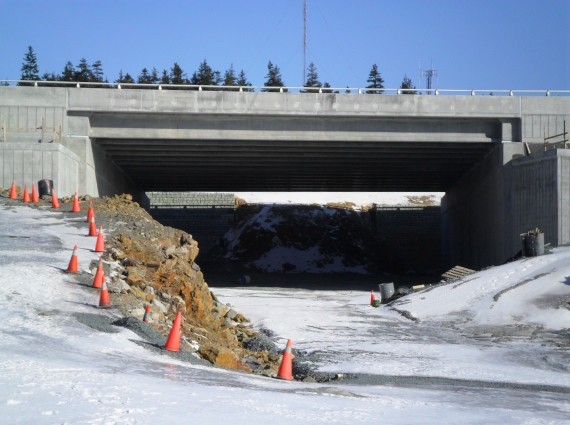 A major scandal is rocking Halifax City Hall. Some councillors want to fire Wayne Anstey, the city’s head bureaucrat. Councillors Gloria McCluskey and Mary Wile had a public screaming match Saturday at what was supposed to a staid and celebratory grand opening of the Canada Games Centre. Most important, council is left dealing with a staggering huge budget hole---$8 million added to an already huge $13 million---caused by a single bridge project that pits suburban development against downtown’s needs.

At issue is a mundanely titled project called the Washmill Lake Court underpass, Washmill Lake Court being what’s now a two-lane cul-de-sac between the Empire Imax Theatre and Old Navy in the Bayers Lake Industrial Park. The idea was to widen the roadway to four lanes and extend it under Highway 102; over on the other side it would hook up with a new section of Regency Park Drive and extend onto Main Avenue. Basically, the new underpass would connect the suburban apartment blocks of Clayton Park to the suburban big box paradise of BLIP.

The Washmill underpass is a economic stimulus project from 2009. (I’ll spare you the long and sordid political history of how this particular project rose to the top of the city’s economic stimulus list, but if you’re interested, I explained this sad tale in November, 2009, here.) What followed was a textbook example of How to fuck up a construction project and bankrupt the city.

HOW TO FUCK UP A CONSTRUCTION PROJECT AND BANKRUPT THE CITY

Step One: Perform a bogus cost estimate
As recently as March 31, a list of capital projects in HRM put the cost of the Washmill underpass at $5.8 million, a figure apparently pulled from someone’s ass. When it looked like the project would actually get some federal funding, though, a new number was pulled from someone else’s ass: $10 million. That’s the figure that was given to the feds for consideration for economic stimulus funding. 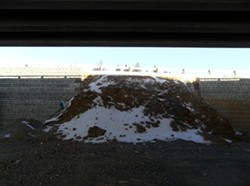 The Washmill underpass now leads directly into this stone wall.
The city guards itself against cost overruns by hiring a consultant to perform what’s called a “Class A estimate” of project costs. Instead of pulling a number out of someone's ass, the Class A estimate is supposed to take the task so seriously that it ensures final project costs will come within 10 percent of the estimate. In this instance, engineering firm SNC Lavalin Inc was awarded a $195,939 contract to design the underpass project, estimate the costs and oversee construction. Tellingly, even the Lavalin contract was $35,000 over anticipated costs.

None of the city paperwork I’ve been able to find details exactly what costs Lavalin projected for the entire project, and no city officials with that knowledge are returning my calls today, so we’ll just have to wait to find out. But we do know that the project was broken into three parts: Phase 1 would consist of the excavating required to build both the new extended Washmill Court, now to be called an “Avenue,” and some temporary bypass roads up on the Bihi---the zig-zag drivers have had to maneuver the last few months. Phase 2 was to build the bridges. Phase 3 would build the new Washmill Avenue.

Lavalin estimated that Phase 1 would cost $2,005,000, and city council OKed a tender for that amount to Brycon Construction Limited on March 2, 2010, adding the extra 10 percent into the budget as a precaution. But even the extra dough didn’t cover the actual costs of Phase 1, which was completed just shy of a million bucks over-budget plus 10 percent: $994,137 to be exact.

The increased cost for Phase 1 arises from both cost over-runs, as well as including work in Phase 1 that was originally intended to be carried out in Phase 2. The work originally intended to be completed in Phase 2 included removal and disposal of pyritic rock that was to be used to construct the subgrade of the detour road. After construction commenced, an application for the temporary use of this pyritic slate was submitted to N.S. Department of Environment but the application was denied. As a result, the slate was removed in Phase 1 and new rock had to be imported to construct the detour road. This resulted in an extra cost of $550,000.

Pyritic rock is nothing new in Halifax---most every large construction project has to deal with it. It is a highly acidic slate, that once dug up poses run-off problems for adjoining properties and, as I understand it, for underlying aquifers. The rock is disposed of simply enough---you cart it off to an approved salt water infill project, in our case either the King’s Landing condo project in Dartmouth or Waterfront Development’s Mill Cove infill project.

The city, however, thought they could use the rock temporarily as a base for the Bihi detours, an idea nixed in a millisecond by the Department of Environment, whose spokespeople are presently digging up the file for me.

Step Three: Hide humungous cost overruns behind the Queen’s substantial, er, party
Things really got interesting for Phase 2, which was getting up and running in June, 2010. None of the public paperwork says anything about Lavalin’s projected cost for Phase 2, but on June 28, 2010, then-CAO Dan English approved a $8,129,590 tender award to Dexter Construction to do the work.

The un-completed underpass is the target of graffiti artists.
According to normal city rules, any contract worth more than $500,000 has to be approved by city council, so what’s English doing approving an $8.1 million contract? Well, the city’s procurement policy does provide an exemption for the half-million dollar limit:

During the summer months (July and August) and for occasions when a regular Regional Council meeting has been cancelled or the regular schedule creates more than eight (8) business days between Council meetings, the CAO or his designate, may approve the award of contracts...

Thing is, there was a city council meeting scheduled for the very next day, June 29. But, hey, we were all excited about the Queen’s visit, which was filling up the week with hoopla and lunches and whatnot, so to free up councillors' time, the June 29 meeting was cancelled. I have no idea who made that decision, but such decisions are typically made by a nebulous committee that includes mayor Peter Kelly and the CAO. I remember the announcement the previous week clearly, because councillor Gloria McCluskey turned to me and said, “I don’t want to see the Queen; I saw her enough the last time she was here.”

“I didn’t go to any of the events,” councillor Bill Karsten tells me. “I don’t think any of the councillors did---except for Steve Streatch; he went to a luncheon, I think.”

It’s not like the council didn’t have much to do. For example, an $8.1 million contract that would push the Washmill project past the $10 million budget---with Phase 3 still to come---is a really big deal. But more than that, all the other stuff on the June 29 meeting was moved to the following week. “We met from 9:30 in the morning until 9:58 at night,” recalls councillor Jackie Barkhouse, who sort of compulsively records such information.

Regardless, for whatever reason, English was able to single-handedly, without council approval or even council knowledge, commit the city to spending $8.1 million and breaking council’s approved budget for Washmill.

Step Four: Don’t tell councillors anything until their backs are against the wall
It’s been over six months since the heavy doors at City Hall hit English’s departing backside, but throughout that period it never occurred to any city staffer to tell council that a moon-sized meteor was bearing down upon the city budget.

“The first I’ve heard of it was last week,” says councillor Dawn Sloane, echoing comments made by a half-dozen others.

It’s as if the Washmill project was simply set aside and forgotten about, until after Christmas. The equipment at the site is sitting empty, and graffiti is now scrawled on the walls of the underpass that leads directly to a stone wall.

Equipment sits idle at the construction site.
But the economic stimulus funding has a deadline. Specifically, if the city doesn’t finish the project by March 31, then it loses the federal and provincial funding; that is, $6,666,667. Thankfully, so many of these stimulus projects have fallen behind schedule that the feds have agreed to roll back the completion date to October 31, but only if the various cities sign an application by next month. That’s apparently the only reason the entire can of worms is coming before council even now---because staff needs a signature.

And what about Phase 3? Well, again, there’s no telling what Lavalin projected the costs to be, as that’s evidently some sort of state secret. But staff says Phase 3 will cost an additional---I suggest you sit down before reading further---an additional $5-to-$7 million, bringing total Washmill project costs, initially Class A estimated at $10 million, to between $16 and $18 million.

So council is confronted with these options:
1. It can cancel the project outright, and thereby lose $6,666,667 in federal and provincial funding and eat the entire $11 million already spent to get an underpass to nowhere.
2. It can find another $5-to-7 million dollars laying around somewhere and get the job completed, and eat the potential $8 million in cost overruns.

Understand that council, having more or less reasonably dealt with a $30 million budget shortfall in the spring, was supposed to find another $13 million in cuts in the fall, a decision that was kicked back to January as council, ironically, fell over itself to find a few hundred million dollars for a convention centre. So, we’re now left with a $21 million budget shortfall, which will likely be compounded by a bigger hit in the April budget sessions.

In other words, we are in something resembling fiscal freefall.

I’ll have much more to say on this issue in coming days.