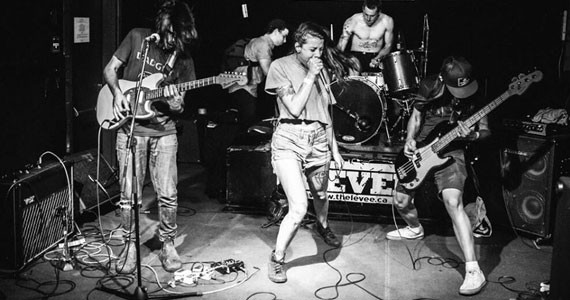 As a journalist, I report the facts. Here's one: Geil makes the best punk songs around. Made up of four friends—vocalist Jessi Talbot, guitarist Ben Brennan, bassist Tri Le and drummer Aaron Burke—the band started off as a "one-off joke" and thankfully for us, has persevered.

The songs are powerful and energizing. Post-Pop Explosion, there's a show October 29 at Plan B, a split tape and digital release with Cringeworthy, because, please trust, you will want more Geil.

Brennan says everything is written collaboratively, focusing on fun, not perfection. "There's no fear," he says. "Stakes are low."

"I didn't play drums in a band before so this has been the easiest way for me to learn," says Burke. "That's how we started," says Talbot. "Everyone wanted to do something they hadn't been doing so we said 'OK, let's be weird in the basement.'"

"We've been friends for so long and we've worked with each other in so many other projects that we've developed a creative relationship," says Le. Burke adds that "there's a level of rock to everything." And truthfully, Geil is more about the groove than technical acrobatics. "Fun is the key for me," says Le. "I really want the feel of the music and the band to be loose and enjoyable."

Talbot's lyrics reference zombies, comics she's reading, her diary or "really intense stuff about [her] period" but it's her energetic stage presence that sells it. "I just love drooling and yelling in general so it's nice to do that in front of people," she says. "I'm a Leo. it works for me."