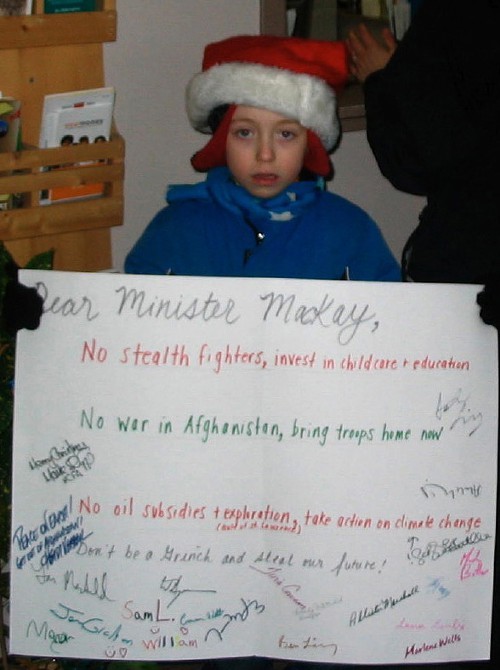 Small groups of peace activists rallied outside Defence Minister Peter MacKay’s constituency office in New Glasgow on Thursday and Friday to voice their opposition to the Conservative government’s plan to spend $16 — $21 billion on F-35 fighter jets made by Lockheed Martin.

“The US military-industrial complex and especially Lockheed Martin have put tremendous pressure on the Department of National Defence,” Pictou County peace activist Paige Kennedy told the Coast in a telephone interview. “We understand how large this pressure is.”

Kennedy referred to confidential cables from Wikileaks showing how the US government pressured Norway to buy the controversial F-35s in 2008 when it appeared that Norwegian officials favoured buying Swedish military jets instead. One cable reveals that high-level American officials conveyed “forceful” behind-the-scenes warnings to Norwegian politicians that failure to buy the fighter planes would damage relations between the two countries. The cable shows that at the same time, the US and Lockheed Martin worked together on an intense PR campaign to sway public opinion in favour of the F-35s and against the Swedish Saab Gripen aircraft.