Why people get tattoos of their pets

Pet-inspired tattoos are a common way for owners to always have their loved ones with them.

It took Ariel Mactavish two hours to get a decent print of her dog's paw—an image that would later be part of her tattoo.

Her Shetland sheepdog, Zorro (named for the Z-shaped marking on his neck) was getting impatient after having his pads pressed into a stamp pad over and over.

"He was not impressed, and I probably had like 30" prints, she says.

Mactavish was finally able to get an ideal stamp for her permanent ink, which she got tattooed the following day. That about three years ago, just a couple years before Zorro passed away. 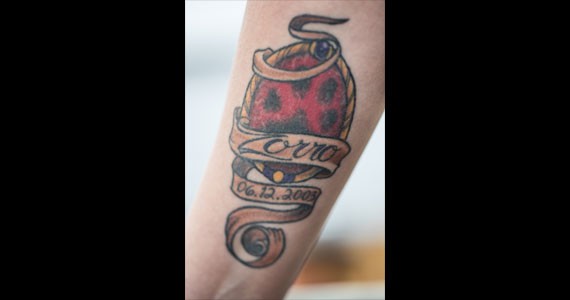 "People think I'm crazy when I say this, but I swear that he had a sense of humour," says Mactavish.

Unless we're talking about someone who has a macaw or a Galapagos tortoise, pet-owners tend to outlive their animals. That said, pets often leave a permanent mark on the people in their lives.

For some folks like Mactavish, that's literal. Having moved from Dartmouth to Wolfville for university, she wanted a way to keep Zorro with her.

"At the time, I was really just getting it because he and I were really close," says Mactavish. "I didn't like being far away from him, especially where he was getting older."

In total, Zorro was in Mactavish's life for about 12 years. But even pets with shorter lifespans can have a lasting impact on their owners.

Emily Moore, for instance, had a rat named George for two years. After he died, she decided to get a portrait of him as a tattoo.

"I guess it's funny for a pet that only lives two to three years...but they have that connection with you," says Moore.

Although he didn't live a long life, George led an interesting one. Moore recalls his run-in with two feral rats one evening. The furnace room door was left open, and the door to George's cage hadn't been closed properly. So, the other rats were able to make their way to the cage and attack George.

"There was blood on the wall," says Moore. "It was the most horrific night."

Moore was unsure if George would survive, but he pushed through. Maybe it's appropriate, then, that he took his name from boxer George Foreman. To avoid another incident, George's cage was kept upstairs—with locks on its doors—from then on.

"I don't think I'll ever get a rat again," says Moore. "You know when you have that special pet? That was George."

Mactavish feels a little differently. She plans to have another dog in the future. That doesn't negate how much she loved (and still loves) Zorro.

"He's not just a dog," she says. "I'm not just celebrating this one time we spent $800 on an animal. It is obviously a lot deeper than that."

"More often than not, I guess, it's a memorial one," says Forbes, adding that paw prints or portraits are popular choices.

His favourite pet tattoos fall on the quirkier side, such as animals dressed in "human clothes."

"A dog dressed up as a general or something like that," says Forbes. "That's kind of cool take on it."

Forbes says it makes sense that people want to commemorate their animals in ink—folks tend to get tattoos of things that mean a lot to them. "To most people, their pet is an important part of their life, so I think that's why you see a lot of it."

The significant role a pet can play in someone's life clearly applies to Mactavish and Moore. Both of them say they have to deal with the occasional "weird look" when it comes to their tattoos, and Mactavish has gotten a few negative comments.

Often, though, the people who disapprove don't understand the story behind the ink.

"When people make comments like that, I'm just like, 'Have you never loved something that much?'" says Mactavish.