Submitted
“We decided to put our boats in the water. I haven't felt so free since owning the boats.”

Long Lake needs to be open to swimmers, to kayakers, to the community.

Recently, my brothers and I bought some Jet Skis and kayaks. Mostly as an entrepreneurial investment, but also for our own enjoyment. Over the past month, we have been to about six different lakes and bodies of water across the HRM, enjoying the water ourselves or renting our boats out to folks. We reflected and wondered how we missed out on all these years of enjoying Canada's Ocean Playground. In these places like Porters Lake, Lake Echo, Waverly and Enfield, there aren't many Blacks on the water—no surprise.

As we pulled up this summer, we noticed the body language of strangers. Some looked surprised, and others had questioning faces as we played our music and enjoyed ourselves, doing what young Blacks do. The looks caused some feeling of hesitation, a feeling of we don't belong here. We felt a bit challenged by the atmosphere that didn't make us feel 100 percent comfortable or welcomed. So we started to think: These lakes are no better than our own Long Lake in North Preston. We have to get out there!

We grew up swimming in Long Lake during the summer or playing hockey on the frozen surface during the winter. We heard stories of our parents walking to the lake from the church to get baptized while the entire community watched. Long Lake is also a lake that we were always fearful of because we heard warnings of getting arrested if we got caught swimming or legends of getting sucked under by the "currents" in the middle.

We heard stories of kids drowning down at the lake. We have been told we cannot swim because it's a part of the "watershed" (I still don't know what that means). We hear that this water is our drinking supply, but we also hear that it changed a few years ago. Long story short, there has been a lot of confusion and miscommunication surrounding our lake for decades.

Are we allowed on OUR lake or not?

We decided to put our boats in the water. I haven't felt so free since owning the boats. We had over 20 people stop by and chat or hop on the boats when we were there. We all had smiles and looks of pride, finally free to use our water. We saw the beauty of our lake and started to imagine houses on the water, docks, boathouses, kids swimming. All the cool things we saw at the lakes in those other communities.

My imagination ran wild until my dream was quickly interrupted as a police car that pulled up to the lake. I'm already feeling frustrated knowing that this police car is one of the four that roam and guard North Preston almost under a 24-hour watch these past few months. Somehow there are still shootings in our community, so I don't understand their purpose, but that's another story.

The officer got out and told us that they received a complaint from someone on Johnson Road (always your own) saying that we had boats on the water and we're not allowed.

Nothing came out of our interaction with the officer because they didn't know much about the ruling. The officer could not get in touch with anyone who knew if we could be on the water. At that moment, I decided I wanted to dig into finding out: Are we allowed on OUR lake or not? And why are we being told we aren't permitted when everyone else seems to be?

I started making some calls, and after about 10 days of speaking with different representatives who didn't know, I finally got in touch with the manager of the Lake Major Watershed. I explained my reason for calling and asked him the question, "Are we allowed on the lake in North Preston? If no, why not?" He quickly went into a bit of a defensive position, which raised my eyebrows.

He explained that this was a geographical issue and not discriminatory (I'm paraphrasing). This response came without me making any suggestions of such. He explained how it certainly appears unfair, as our neighbours on Lake Major (no more than a two-minute drive away) have recreational access to their water (which I believe is still their water supply), and North Preston is not allowed. Again this came unwarranted. Despite all of that, he was pleasant to talk to. I sensed that he loved his job and certainly wants to do all he can to help protect and work towards freedom to use our lake. 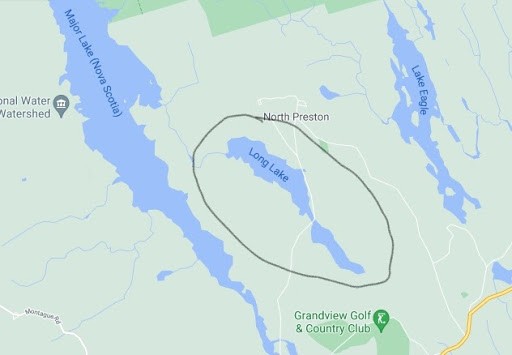 Submitted
Long Lake and some of its neighbours in the Lake Major Watershed.

Here are some results and conclusions from our conversation:

No access for recreation
We are not allowed any recreational use whatsoever on Long Lake currently (swim, boat, kayak…nothing), even though our neighbouring Lake Major is allowed. From my understanding, this decision was made by a North Preston community member who sits on the Lake Major board and represents North Preston. Was the decision a community decision?

Representation on a board
There is a board where these things are communicated and decisions are made in regards to the lake. We have a representative from our community on that board. What board is this and who are the members? (This is an important piece.)

Bylaws were written decades ago
The bylaws that were set to restrict lake usage were set mostly 40-to-60 years ago. Boats back then weren’t as safe, and technology was not as advanced. We know now that four-stroke engines are less likely to have oil leakages than two-stroke engines, for example.

Scholarship
This one is huge! There’s an Arnold Johnson scholarship provided by Halifax Water, for an African Nova Scotian student from the community. In the 10 years or so it’s been around there has only been ONE person who applied and got the scholarship. They have been having a hard time filling this scholarship, but we have a ton of youth who could most certainly use it.

Here are the details of the scholarship that I was able to gather: It goes to indigenous African Nova Scotian students entering environmental or mechanical engineering technology at Nova Scotia Community College. Valued at $7,200, it covers two years of schooling at NSCC, provides paid summer internships with the watershed and leads to instant job opportunities after the program is finished.

Here are my issues after doing this research:

1There is a $7,200 scholarship—probably valued at over $60,000 with the job opportunities—sending our youth into environmental engineering that no one knows about. Well, no youth know about it. It's insane that there has only been one applicant, ever! Scholarship funds and opportunities are being left on the table, kept virtually secret from a community that so desperately needs these opportunities.

2The "community representatives'' seem to represent our community in a lot of areas of government. But who chooses these representatives? How were they elected? If we polled 100 people under the age of 30 from North Preston, I’m sure no more than 20 (non-family members) would recognize some of these “representatives.” It doesn't sit well with me to have them speak on our behalf and be given the responsibility to make decisions for us.

3In my community of North Preston, which, for many factors, is not overflowing with resources, the safe and sustainable access to an incredible natural resource in our own backyard—Long Lake—is vital. I could only imagine the positive economic, social and cultural impacts this would have on our community.

4Water access is one of Canada’s greatest pleasures. If other communities, even communities right next to us, are able to access their water recreationally and enjoy this pleasure, North Preston needs that same right. Or at the very least, explanations. Fair explanations.

And the simple answer of why we do not have access to our lake.

Nevell Provo is a former Team Canada basketball player turned entrepreneur. From North Preston, he studied finance and business at Loyola University in Baltimore and at Saint Mary’s University, where he is currently finishing his degree. Nevell and his family founded Smooth Meal Prep in 2018 while he was a student athlete, and most recently R&B Kitchen. Nevell is also a founding member of The Futures Program, an non-profit organization that helps athletes find their potential off the court. He is a board member of the Family Business Association Atlantic, and has a passion for youth and community.