The Coast
CUPE 3912 members picketing outside Dalhousie University on Wednesday.

Everything you need to know about the CUPE 3912 strike that began on Wednesday, October 19

Teaching assistants, part-time instructors, markers and demonstrators at Dalhousie University are officially on strike after last-minute negotiations between the CUPE 3912 union and the university on Tuesday failed. On Wednesday morning, employees picketed outside the school and students passing by gave cheers of support for their teachers.

The approximately 1,500 Dalhousie employees represented by CUPE 3912 haven’t received a raise since 2019. Gabor Lukacs, communications officer for the union tells The Coast members are “fired up and pissed” and “have reached a breaking point.” The union’s top demands are a pay raise that compensates for inflation, wage parity with other U15 Universities (Canada’s top research institutions, like UofT and McGill), equating the pay of markers and demonstrators with teaching assistants and workers getting paid for the actual amount of hours they work. 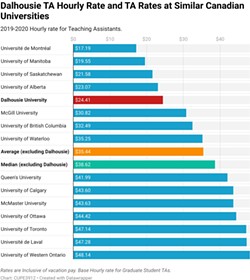 Dalhousie pays some of the lowest wages to part-time instructors and TAs among U15 universities, while charging among the highest tuition rates in the country. According to the union, TAs currently make $24.41 an hour compared to the U15 average of $35.44. Part-time faculty are paid $5,232 per semester-long course while the average is $7,160. Lukacs says Dalhousie has not given the union a clear answer as to why they pay so much less than other major universities. “The cost of living in Halifax is not cheaper than elsewhere, it is a myth,” he says. The price of a good life in Halifax is a household income of $85,000 a year, according to the Canadian Centre for Policy Alternatives. “The way you show respect to the workplace is by money—and we are being disrespected for a very long time.”

Now entire courses, lectures, tutorials and labs taught by CUPE members are cancelled, and assignments and exams won’t get marked. It’s likely that almost every student on campus will have at least one course affected by the strike. Dalhousie has not yet communicated to students if they’ll get any tuition money back.

There are three things Lukacs wants students to hear: “First, that strike is our last resort. We are not taking this lightly. The second thing is that our members love teaching, but they also have to eat and pay their bills. And last thing we ask of you is to support us online and on the picket line. The more support we have, the longer the picket line, the shorter the strike.”

Kristen Millar is one of the TAs on strike, and she makes the same wage as she did at McGill—in 2016. She leads the tutorials for a writing course for computer science students. “I take a lot of pride in what I do and I want to do my very best, it's just I know I could do that so much more if I had the material support,” she says.

On top of her TA work, she has three other jobs at Dalhousie and is also a full-time student. Yet Millar says it’s still hard to make ends meet. She was down with a cold when she spoke to The Coast, and told us she’ll have to pick up extra shifts elsewhere to make up for lost work because TAs don’t get benefits like paid sick days.

“I’m often really thinking about okay, how can I make my food budget stretch? You know, when can I go to the Loaded Ladle [a free lunch program for Dalhousie students and staff] this week? When can I find groceries that I need on sale?” she says. “There's so many things that an increased wage can do just to alleviate tertiary stressors that one may not even know impacts their overall quality of life.”

One of the reasons the union is striking is that Dalhousie doesn’t pay members for overtime. Millar’s contract pays her for 90 hours across the semester, but she says she will end up working far more than that. “I will work more than I know I will get paid because I believe my students deserve that,” she says, “even if that isn't reflected in the pay that the school believes my work is worth.”

Millar says the low pay “sends a message that we are not a part of what enriches Dalhousie’s academic community.”

“I very much challenge that offensive notion because from the part time lecturers and teaching assistants I've met, they all work tirelessly and do their very best to provide their students top quality learning experiences.”