Kevin Walsh poses with his Sherpa, Phurbaritar, who he says was essential in getting to the top. FACEBOOK

Just over a week ago, Kevin Walsh was on top of the world—literally. The Annapolis Valley dentist summited Mount Everest on May 23 along with nine other people in his climbing group. It wasn’t an easy feat. On top of the months of training, oxygen deprivation and harsh elements, Walsh also had to deal with COVID protocols.

“We had the ability to do rapid COVID testing at camp, we wear masks, we had a bubble we isolated for a few days before everybody arrived,” he tells The Coast in a late Monday afternoon Zoom call the day after arriving back in Kathmandu, Nepal, the city nearest Mount Everest.

Walsh also managed to get his first dose of vaccine before leaving. “I was lucky to get the Pfizer shot before I left, which was a big factor in my decision whether to go or not,” he says.

However, even with these precautions, the tallest mountain on Earth wasn’t immune to the virus. According to the Associated Press, over 100 people, including six Sherpas, at the mountain’s base camp have contracted the virus since the first Norwegian hiker with COVID-19 had to be flown off the mountain in April. 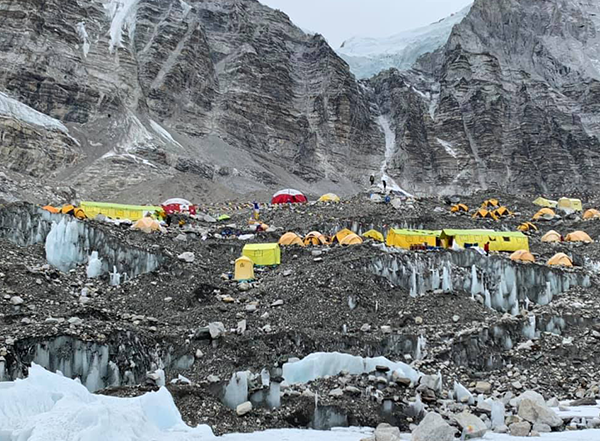 Facebook
Climbers on the ground didn't realize the extent of COVID spread around Everest. “Nepal is pretty hush hush on those things," Walsh says.

But despite the COVID cases, 41 groups have climbed the mountain this year, and 408 climbers were issued permits to do so. Meanwhile the country itself has seen over 500,000 COVID cases and 7,000 deaths since the pandemic began.

Walsh says he doesn’t regret his decision to go during the pandemic. “There's really only one season for Mount Everest. You basically come late March, you're there for April and May, usually summit late May. The monsoon rolls in early June, and then kind of things shut down,” he explains. “It was either go now or wait till 2022 spring, and in the end the stars aligned and the timing was right.”

But Walsh says on the ground, many climbers are unaware of the extent of the COVID situation. “We heard speculation, rumours. There was never really any confirmation,” says Walsh. “Nepal is pretty hush hush on those things. From what we could gather, there were at least 17 cases, probably more, but we're not really sure.”

Adding to the confusion was that mountaineering sickness symptoms are similar to COVID. Walsh says his group, which was mostly North Americans and a few people from Europe, stayed separate from other groups while staying at the mile-long base camp of 1,500 people. “We were very much kept to ourselves and didn't really see a whole lot of evidence of [the virus],” he says.

Walsh says locals welcomed him with “open arms,” which may be in part because this year, the 1.1 million tourists who typically travel to Nepal haven’t gone. Since COVID hit, the Khumbu region has seen a decrease in tourism and the money that comes from Everest climbers. “Last year, it was shut down completely, and they were just devastated,” says Walsh.

Similar to Nova Scotia’s cruise ships, wineries and tourism dollars, if the tourists stop coming, the money stops flowing. “So they were so thrilled to have us there, open arms,” he says of this year. “We felt good as a group that ethically and morally it was doing the right thing for the people of Nepal. And in the end nobody in our group got COVID.”

While Nova Scotians who are laid off are able to apply for CERB and other grants—however miniscule—Nepalese people don’t have the same privilege, and must continue to make the trek to the top to provide for their families.

“I think when you look at the risk reward for the locals, it was very much in favour of them being very happy to see the climbers,” says Walsh. “You didn't get the feeling that they were concerned or worried about the spread. They were just open arms. 'Thanks for coming to our valley. Thanks for giving us jobs.’”

On Wednesday in Kathmandu, Walsh received a congratulatory call from premier Iain Rankin, then started flying back home to Canada. He’ll be landing in Toronto where a PCR test and a three-night hotel stay await him. Once the test is negative he’ll fly to Halifax and isolate in his house, separate from any other family members.

“Once I arrive in Halifax, it's 14 days less what I spent in Toronto, and then I'm free and clear,” he says. “You can isolate from everyone in your house and have your own area. I do have that setup, my wife's been diligent and has done some renovations while I've been gone.”

When Walsh left Halifax and even during training days in Nepal, he worried the final climb could get called off. “It obviously was a consideration at any point that the whole thing could be cancelled,” he says. “If things didn't look safe, look risky, the rules were saying that I shouldn't go—I would have cancelled in a heartbeat. But no, it worked out.”

Walsh’s group, which was originally 17 and got whittled down to just 10 before the final climb—“we lost some along the way, illness, injury, homesickness”—got the go-ahead to begin an early morning climb in the darkness.

Twenty Sherpas helped the group along the way—one-on-one climbing is common on Everest—including Walsh’s personal pairing Phurbaritar, dubbed Mickey Mouse for how quickly he climbs the rocks. “He's almost 60 years old. He’s summited 15 or 16 times, he's lost track,” Walsh says. “He was like four-foot nine and a powerhouse.”

At the top, just after daybreak, Walsh proudly posed with his Nova Scotia flag (which he quickly stashed back in his pocket, since there’s enough litter on the mountain already). “It was amazing to finally reach it, get there and be at the top of the world,” he says. “We did it safely. We did it carefully. We did it COVID-friendly. And if I had been a year older, it would have just been that much harder. So I'm glad I got it done this year.”