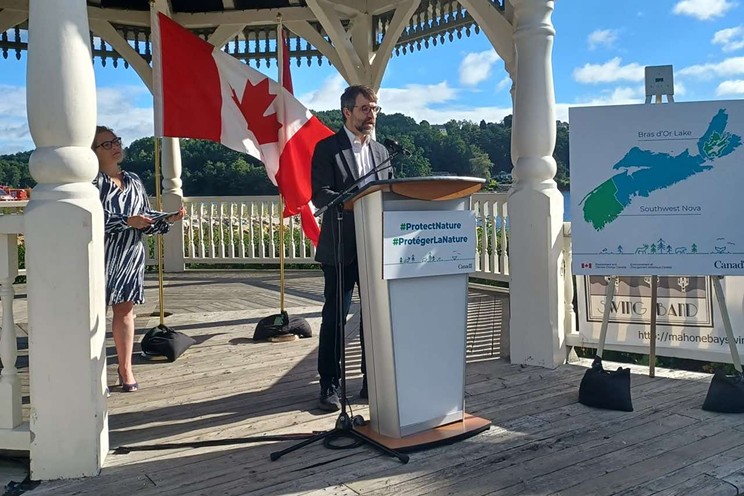 Once a firebrand known as Green Jesus, Steven Guilbeault lost his nerve when he got the power to play climate god.

Prior to The Coast’s interview with Steven Guilbeault, the federal minister of environment and climate change, his staff sent a file called “Guilbeault narrative and brand (BDC)(MA).docx.”

“Minister Guilbeault is an activist,” it starts. This narrative/brand document is supposed to sow the seeds of optimism in the face of the climate crisis. “People must be given reasons to hope,” the document helpfully concludes. Guilbeault’s accomplishments are listed in the middle.

For example: “Bringing together a comprehensive plan to reduce emissions under a tight, legislatively imposed timeframe has been his greatest accomplishment.” And: “Steven continues pushing for change to reduce plastic waste in Canada and across the world.”

It is hard to be optimistic about the future of the planet. It’s too easy to find information about how we’re not doing enough. Hell, even the letter listing Guilbeault’s accomplishments is underwhelming. “Pushing for change” around plastics? Why is he just pushing instead of legislating? Does the minister know anyone with power?

And that’s without getting into how some of the stuff that’s supposed to save us, like the silver bullet of carbon offsets, are just low-key scams for companies to make more money.

The hope is supposed to come from the belief that Guilbeault is some sort of eco wolf in sheep’s clothing—a climate activist who managed to get appointed to cabinet—and he will use his power to make change.

But hope dies when that activist turns into a politician.

Being Canada’s environment minister comes with definite challenges. There are roughly 38 million of us, and it seems like we don’t agree on much anymore. It’s one of the big differences between activism and politics affecting Guilbeault in his current role. He says that being a climate activist was easier, “because I was representing the members of an organization who all agreed.”

His activism started early—he chained himself to his first tree at age four. Over the course of decades as a firebrand in the activist world, he earned the moniker “Green Jesus” as someone who boldly took action to try and force the hand of leaders to make change.

Now he IS one of those leaders, putting Green Jesus in a position to play god.*

Canadian politicians have a lot of power. Real legal power they can exercise if they decide it’s warranted. And there is a huge existential issue facing the country: The change in our climate. It is something our politicians need to take action on. The thing that holds their power in check is us. The power our politicians have over our lives is immense, and so it is good that they are hesitant to use it.

And while it is good that politicians defer to our desires in their decision-making process, they still do need to make a decision. The United Nations says “the climate emergency is a race we are losing, but it is a race we can win.” NASA says “it may not be too late to avoid or limit some of the worst effects of climate change.”

These are not decisions that can be deferred. And yet, deferring major decisions is all the Liberal Party does.

It’s all any politicians do. Politicians spend a lot of time trying to craft policies that can do at least two things: Whatever the policy is supposed to do, and also appease us. But policies can’t always do both.

Sometimes, Guilbeault says, it’s important for climate policies to have “regulatory fairness.” But Canadian environmental policies do not need to be regulatorily fair, they only need to be constitutional. It’s a slight distinction but an important one. It’s the reason the provincial carbon tax lawsuits against the federal government so far have all failed. It’s unfair to Alberta for the federal government to regulate carbon when Alberta’s economy depends on killing the planet. It is, however, foundationally constitutional for a federal government to regulate and put fees on carbon.

Preventing climate change is going to require massive shifts in how we organize our lives. These changes are not things that people will vote for. They are things industry will lobby hard against. And Guilbeault and his team are working hard to ensure we are never confronted with the grim reality of our projected future.

Not to mention that our grim reality has a grim reality. We haven’t even really started to think about how bad climate change could be. “Paths to disaster are not limited to the direct impacts of high temperatures, such as extreme weather events. Knock-on effects such as financial crises, conflict, and new disease outbreaks could trigger other calamities, and impede recovery from potential disasters such as nuclear war,” says Dr. Luke Kemp from Cambridge's Centre for the Study of Existential Risk.

Any climate policy that is fair to industry can’t do enough to mitigate our upcoming apocalypse. Because none of the world’s largest industries would be profitable if they had to pay full price for what they take from the planet.

The carbon tax, or carbon pricing, has long been the flagship of Liberal environmental policy. Very simply, it works like this: Anything that emits carbon has an extra price for that carbon. That extra price makes things more expensive. Because they’re more expensive, people stop buying them. Because people stop buying them, the market for carbon-emitting things dries up. Planet saved.

In practice, though, Canada’s carbon “tax” does not work like that. For a carbon pricing policy to work, people in Canada need to be able to make choices that can affect their carbon output. Things like choosing to live close to work, choosing to live on a transit line and choosing to live in a city where biking is safe. But a lot of people can’t afford to buy a house or rent an apartment where they want, because what they can afford severely limits their choice. A carbon tax assumes people are living with enough financial freedom that they can choose where they want to live and can make choices that will limit their need for a car(bon).

The Liberal government did not make this assumption, so it gives rebates on carbon pricing. Meaning it doesn’t cost more to pollute and doesn’t change behaviour. But Guilbeault stands firm behind his government’s action on climate change.

“If we lose the next election and the people who come after us decide to throw everything we've been doing down the drain, how are we better off as a country?” he asks.

There’s a lot of talk in government circles about “future-proofing” climate legislation. For example, the carbon pricing legislation itself has a brutal Achilles heel: The price of carbon is set by cabinet. So when a Conservative government inevitably sweeps to power, it can just change the price of pollution to $0 at its first cabinet meeting. And since the Liberals have been doing things to undercut themselves, like giving rebates to individuals and allowing major polluters to keep polluting, the country has spent a lot of time and public money to have the carbon pricing legislation not have much of an impact on climate change.

If the government were serious about future-proofing climate policies, it would use its power to change our behaviour now. Ban the sale of gas-powered cars now instead of 2035. Build that high-speed rail line. If the Liberals had started building high-speed rail in 2015, there would be large sections of it up and running right now. People would be using it, it would have been integrated into the fabric of our lives and would be very hard for future politicians to take away.

That’s how to future-proof climate policies: Start doing some of that vaunted #realchange.

Fundamentally, minister Guilbeault’s brand/narrative document is right: People must be given reasons to hope. But we have not been given any reasons. One of the reasons we should have had hope was because Guilbeault was an activist.

But now, he’s minister Steven Guilbeault. A man who went into politics to prevent climate change, and he is now in a leadership role where he can make that change. Instead, he is actively taking steps to make it worse.

So then, what hope is there to be had when one of Canada’s foremost climate activists becomes Canada’s most powerful climate change leader but is then powerless to enact policies that will prevent climate change?

What hope is to be had if Guilbeault spent just shy of 50 years fighting the status quo to become a minister and, within a year, capitulated to the hegemonic shackles of the status quo?

What hope is there to be had if a man who could not be silenced on climate is now seemingly powerless to even voice displeasure at his role of scapegoat?

We would have hope if Mr. Guilbault was still an activist.

There is no hope to be found as long as he remains minister Guilbeault, the politician.

*Subservient to his boss, the prime minister, who in turn is subservient to the Queen of England, long may she reign.