Whip It is fizzy fun 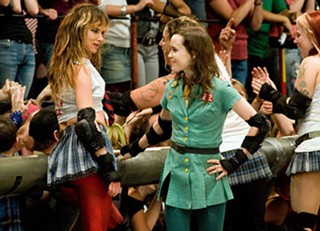 Drew Barrymore’s directorial debut is fizzy fun, so much so that new ads are playing up the “Teenagers, yeah!” angle while tossing in a single obligatory shot of a be-helmeted Ellen Page. Whip It follows Bliss (Page) as she secretly comes of age on the roller derby track while running the Texas pageant circuit to keep her mother (Marcia Gay Harden) happy. Though it’s got first-timer mistakes (too long, too many food fights) its indie-rock girl-power charms are, like co-star Kristen Wiig, undeniable.

Whip It is not showing in any theaters in the area.