Thanks to a strong business partnership with Almonak's Christopher Campbell, Tandy is living his French bistro dreams.

IAN SELIG
Frédéric Tandy wanted to open a French bistro even before he started Ratinaud 10 years ago.

WHO HE IS
Ten years ago, Frédéric Tandy opened Ratinaud French Cuisine, a charcuterie brimming with cured meats, rillettes, sausages and imported cheeses. Since then, it has grown into a thriving business on Gottingen Street. But few know that, instead of a charcuterie, Tandy's original plan was to open a French bistro. "I had this great idea, but nothing to back it up financially because I had no assets at the time in Canada," he says. "So, I looked around Halifax for what was missing, and I decided to open a specialty store." The bistro itch was left unscratched until Tandy ran into Christopher Campbell, the owner of hot Almon Street eatery Almonak, and found that they had compatible business goals.

"He's really into coffee and I wanted to do bistro-style food, like sandwiches, salads and soups," Tandy says. "We wanted something very simple—something accessible to everybody." They combined their efforts and created Improv Café, a cafe during the day and a bar on Friday and Saturday nights.

WHERE HE DOES IT
Improv Café is tucked behind Ratinaud at 2157 Gottingen Street, in the space that used to be occupied by The Kitchen Table, Tandy's former dining experience that featured a multi-course tasting menu. "Even though the response was great," he says of The Kitchen Table, "the demand wasn't high enough to keep it going." And so, after The Kitchen Table closed, the space sat empty—until Improv opened in November. "The biggest satisfaction is seeing the energy in here again," Tandy says. "It went from being dead, to being alive."

While The Kitchen Table was sophisticated, the atmosphere at Improv is relaxed, cozy and laidback. Egos are left at the door. In terms of the layout, not much has changed. There is more seating and fresh paint on the walls, but it remains a pleasant mix of industrial and rustic with wooden beams, exposed brick and an open-concept kitchen. 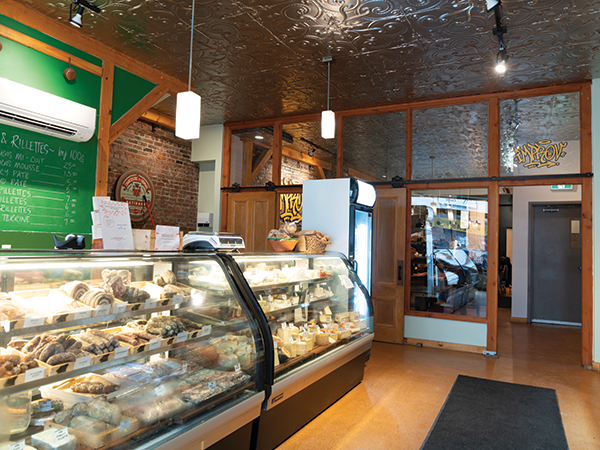 IAN SELIG
Improv Café took over the empty space at the back of Ratinaud. "The biggest satisfaction is seeing the energy in here again," Tandy says. "It went from being dead, to being alive."

WHAT HE DOES
Improv Café might focus on simplicity, but that doesn't mean it skimps on creativity. "The beautiful thing about cooking is that your creativity only stops when you decide to stop it," Tandy says. "Simplicity doesn't mean you're restricted to certain things. You can do improv onstage, but also in the kitchen."

All of the cafe's sandwiches and salads are made to order and include products found at Ratinaud. There's a cured-meat sandwich with noix de jambon, grison, ventrêche, arugula pesto, gherkins and house-made mayo and mustard; a breakfast sandwich topped with smoked gouda, sunny-side-up eggs, pickles and ventrêche; a classic Parisian ham and cheese; and a weekly special that gets a bit more avant-garde, such as next week's beef-tongue sandwich. Salads depend on what's available at the market in the winter, such as marinated kale, pea shoots, sliced beets, carrots and radishes.

On Friday and Saturday nights, guests will find an entirely different menu and a selection of beer and wine. They can build their own charcuterie board, snack on house-made potato chips or enjoy other light fare, such as smoked salmon carpaccio and duck prosciutto salad.

WHY IT WORKS
Tandy says that Improv's success depends largely on his and Campbell's strong business relationship—"we have good communication and a lot of support for each other"—and the passion and dedication from their staff—"our team is everything." Beyond the people who keep Improv running, Tandy believes that sourcing fresh ingredients is key to creating quality products. "I see local as common sense," Tandy says. "It's better ingredients, it's better for the environment and you're supporting the community."

Not only does Tandy source from local growers and farmers, but he also collects ingredients from his own backyard, such as rose petals, spruce tips and wild mushrooms. "Foraging is part of my passion for cooking," he says. "There is so much gold in the woods. If you don't start with good ingredients, it doesn't matter how good you are."

IAN SELIG
At Improv, all of the sandwiches and salads are made to order.