Where I work: Espresso 46

Federico Pasquinelli is bringing the social aspect of espresso into peoples’ daily routines with his north end coffee window. 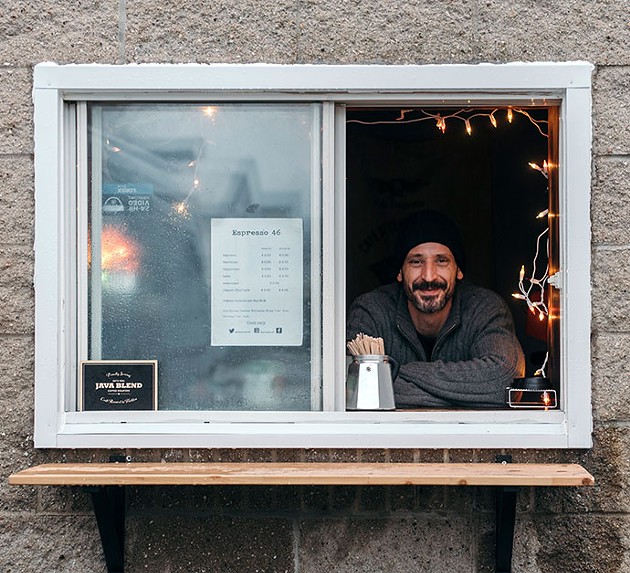 WHO HE IS
Growing up in Prato, Italy, Federico Pasquinelli remembers playing among bags of coffee beans. The espresso bar beneath his parents' home was where the neighbourhood children would congregate after school. "The owner always treated us like we were his kids," he says. "So I've always been around coffee." Pasquinelli started making espresso when he was just six or seven. Nowadays, if you wander down Isleville Street, you can spot him in a little rectangular window in a brick warehouse, bundled up and tending to a red coffee machine. This "coffee window" is Espresso 46, Pasquinelli's own Italian-style espresso shop located in the heart of the north end.

WHAT HE DOES
An electrician by trade, Pasquinelli lived in Australia and worked in the coffee industry for 12 years roasting beans, fixing broken machines and training baristas. In April, he and his family moved to Halifax where he works as a part-time roaster for Java Blend and as a coffee machine technician. And on weekdays, between 7am and 9am, Pasquinelli is warming up peoples' spirits and cold hands on their morning commute. He opened Espresso 46 several months ago, just one day before his youngest child, Leonardo, was born. "I'm a little espresso obsessive," Pasquinelli says. "Because I'm Italian, espresso is part of my culture. We drink espresso in the morning, after lunch and after dinner. It has become a social thing."

WHERE HE DOES IT
At first, Pasquinelli thought about getting a market stall or selling coffee from a van. But then he realized he could use the extra space in the warehouse where he fixes coffee machines as the hub for Espresso 46. He named the coffee window after the motorcycle racer Valentino Rossi–throughout his 20-year racing career, Rossi has consistently used number 46. Espresso 46 is a small room with two windows, one facing Isleville Street and the other facing the warehouse where a market operates each Thursday. "It's kind of like having a market stall," Pasquinelli says. The Warehouse Market is a new local food haven for north end residents with vendors such as Afishionado Fishmongers and Abundant Acres Farm.

WHY IT WORKS
Pasquinelli says life in Italy is often filled with long, busy days. Culturally, the espresso bar is a place where people chat, unwind and decompress. That concept works in Italy, but not to the same extent here. We often tend to linger in coffee shops for hours, sometimes we even pull out our laptops to continue working. "I think the Italian culture of espresso and the way we enjoy it is something I can bring to this industry," Pasquinelli says. He can already see it starting to happen at Espresso 46. The support for the little coffee window has been enormous. An increasing number of locals are stopping by for that brief slice of social energy. "These little breaks help a lot in the daily stress of everything," says Pasquinelli. "That's the main thing I would like to do here."