Where I record: Ashley Pringle’s Arrangements

The EP influenced by Weezer’s debut should be on your short list of 2019’s top albums. 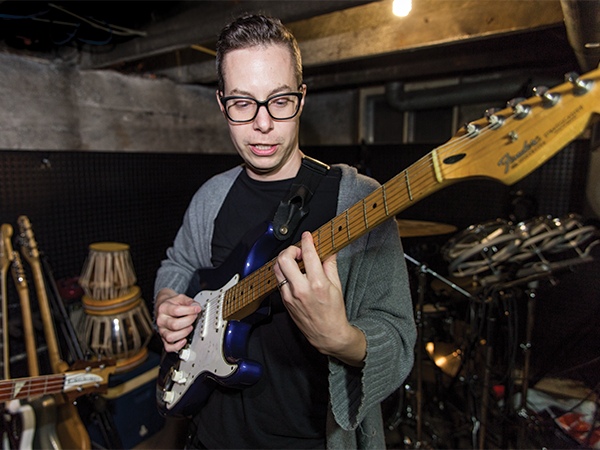 Ashley Pringle has been kicking around the Halifax music scene for years: You might know his guitar noodling in the heavy-psychedelic band, Nor, or remember his face-melting prog-metal band MVMNTS—and then there was his stint in the two-piece prog-punk band Slashy that had a fan in The Super Friendz' Charles Austin ("he said we were, and I quote, 'no joke,'" Pringle writes in an email).

But it wasn't until a handful of summer weekends in 2019, goofing around with some buds in a basement, that Pringle made his best music yet, on the four-track EP Arrangements.

"We just got together and had a good time with it. It was pretty refreshing, because music can be kind of a drag sometimes when you're toiling away and nobody cares," Pringle says of the EP's creation process, which is heavy on fuzz rock aesthetics and also feel-good vibes. With a limited run of cassettes available through his bandcamp page (ashleypringle.bandcamp.com)—as well as a chance to stream the tracks there—consider this your chance to get aquatinted with an EP you've never heard of but should be on your short list for the year's best.

Arrangements kicks off with vocals that are a study in contrasts: Rough as sandpaper but tumbling along to a tune, Pringle says his singing delivery is inspired by the ragged-yet-melody-minded delivery of Kurt Cobain. When it comes to influences, "For this particular thing, the big one was Weezer's blue album—'cause it's just a great album, it's one of my favourite albums. But also, it has that feel of like, when I first started playing music it was just me and my friends in the basement, just recording whatever we felt like and just playing around and having fun with it. And that album sort of felt like that."

Where he played it

It makes sense that the album—which is "all about living with roommates and going nowhere," as Pringle puts it—was recorded with his brother, Dan Pringle, and his friend Dan Nightingale (who doubled as the EP's engineer) in swaths of free time in Nightingale's basement: It's art and life winking in a mirror at each other.

Pringle adds the effort is "self-reflexive," with the guys' laughter remaining in the final take of track three, "No Idea." The heavy distortion groans emphatically as the song re-starts. "I wanted to show we recorded it live," Pringle says, adding that his brother and Nightingale would often hop on drums while Pringle recorded guitar and vocals, rather than layering individual tracks.

To sum up the addictive sound of Arrangements—which lands somewhere on the rock 'n' roll map between early Strokes and Weezer, with a right turn past British Invasion-y pop, Pringle says: "It's sort of cliche but I just wanted to get back to my roots of just playing music with my friends in the basement and having a good time—so the aesthetic has gone from being in high school and playing dumb rock 'n' roll to being in these super technical prog bands and back to 'let's just play a few chords': A conscious effort to strip back the technicality and play what feels good."