Our Sex + Dating survey reveals what could have been.

Two roads diverged in a wood, and one of you took the one that didn't lead to Jacob Hoggard's hotel room. I'm sure that's made some kind of difference. Asked to name your biggest sexual regret or missed opportunity, respondents of this year's Sex + Dating survey mostly felt bad about the rock stars, best friends and hunky Europeans they could have banged. Let their words inspire your tomorrow. Fortune favours the bold, Halifax. Just don't cheat on anybody. Okay? 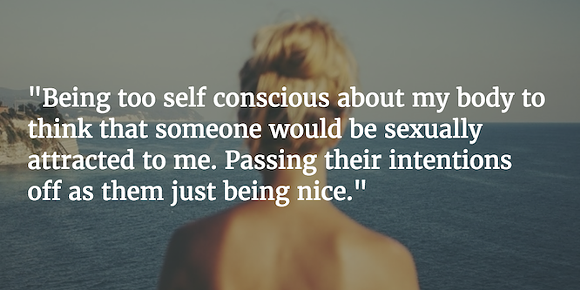 “I gave her a tour around the city after work one night and we eventually found ourselves INSIDE the Citadel, because she was more daring than me and I'm an adventure enabler. Things are progressing very well for us both until I realize that I must have lost my little package of condoms somewhere. We searched all pockets, but they were nowhere to be found. I guess I lost them when we were climbing the fence or something. SO no fucking in the Citadel for us.”

“Not having a one night stand with a beautiful German in Berlin.” 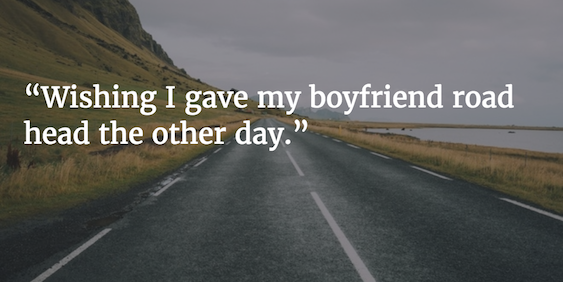 “I regret not fucking the shit out of the guy I'm in love with every single moment we were together before he dumped me the night before New Year’s.”

“Not getting involved in group sex with my teacher.”

“Had a date with an absolutely adorable and awesome lady, but I had cold sores at the time and couldn't kiss her goodnight. Pretty sure that was my window, because we just couldn't get it together after that.”

“Not making a move on my internet crush. (Hi Colin)”

“Said no to a British guy I wanted to hook up with in London the night before my morning flight home.”

“As a trans person with pretty severe gender and body dysphoria, it can be real tough to muster confidence sexually. However, my biggest regret never comes from times that I couldn’t be intimate due to this, but more from the times that I didn't use my imagination to come up with a sexy time that felt safe to me, whether IRL or otherwise.”

“That girl with the pushup bra at new year’s in 2005. She was game, and I backed out because I don't want to leave my friends. The same friends who laughed at me later when I told them.”

“I almost had break-up sex with a recent ex. He and I have a lot of history and, as he was hurt by the breakup, I think the minor-hook-up-that-almost-became-break-up-sex probably hurt him. Both the fact that we kind of started to hook up and the fact that I stopped it because it felt wrong. I feel that it would have been more thoughtful and kind to maintain separation physically during that talk.”

“Waited like three months till the week before I left the town I was living in for the summer to fuck the best sex of my life, so we only got to bone everyday for the last week of my stay :(“

“My friend totally cock-blocked me one night when I was about to close the deal with this incredibly hot guy who was on So You Think You Can Dance.”

“That I didn't ask Matt Mays if he wanted to join me alone somewhere as he slipped past me and out the back door of The Shore Club; I was the DD that night, but it would have been better to have booked a cabin! Lol. A little fantasy of mine, perhaps. Matty Mays, you sexy, yummy thang!” 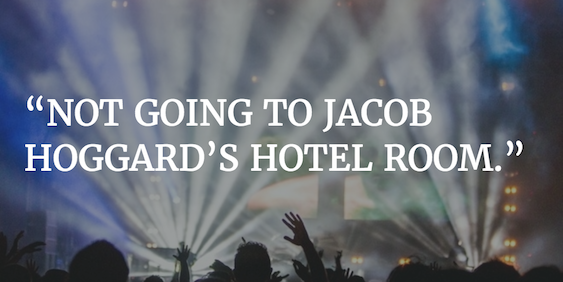 “I just need to grow a pair (of ovaries) and ask more people if they'd be DTF more often.”

“I had a huge crush on someone in my college class and I constantly think about how I missed out. We were both single and I was too focused/shy/chicken to do anything about it because I would've seen him every single day if something went badly. I still think about this dude.”

“Cheating, both doing so and missed opportunities to. Ironic, no?”

“In general, I regret hookups that happen not based on attraction, but just feeling low self-esteem or loneliness. I'm more than happy to fuck without pursuing something romantic, but I try to avoid hooking up just because someone has expressed interest in me.”

“Waiting to have sex with "someone special." That relationships is now my fiancee, and I had more than a few opportunities that I turned down because of Christian conservative bullshit. Damn, first-year residence was a land of missed opportunities.”

“Last year at the Atlantic Film Festival a guy came onto me and flirted with me all night. He was in town and had a hotel room. He invited me back. Unfortunately his friends were passed out so the room was unavailable. He insisted we sneak into the common room and have sex against the wall. I kinda lost the interest when it took so damn long to sort out these logistics (...and stop at Shoppers to buy condoms) that I decided to keep it classy and order a cab home. I was happy with the decision in the moment, but after, I thought...you know..that would have probably been hot. He was hot. And really fucking cool, too. Sigh, why does it always need to be classy? Next time...I guess.”

“Tossing it around too easily in my youth. But it was the 80s. All we had was Risky Business, Fast Times at Ridgemont High and misinformation. Wildly exaggerated, completely unchecked factoids communicated poorly by the self-serving and misanthropic.”

“That time I slept with someone and woke up the next morning to see several fedoras hanging on their wall.”

“I've had a thing for someone for three years, and only just started hooking up with them a few months ago. Glad we waited because we mean a lot to each other now, but we could've been having amazing sex these past three years!”

“I have a few. Like the story of the guy with a J-shaped dick. Or how I realized I was becoming overweight because I discovered the guy I hooked up with was a chubby chaser for me. Or how a guy once wanted me to Dom him BDSM-style so badly he started crying...in bed...while sucking my dick.”

“I was at this party for my program, and a friend of mine brought these two guys over. Now at this time, I was slutty for kissing but a total virgin with everything else. Anyway, I start talking to one of the guys and we start to make out a bit, to my friend’s delight. We continued, getting a little handsy in the process. We stopped and just talked, letting each other socialize a bit before returning to each other. Now, while he was talking to someone else, I started talking to his friend. We also started making out, despite him being straight, and it ended up the three of us on the couch, just chatting away, me being flirty despite not really knowing what I was doing. We were some of the last people to leave, and they invited me over to where they were staying. Me, not knowing what that meant, declined and said I had to work in the morning. Three months later I woke to a realization that I could have lost my virginity with a bi and straight guy that I successfully seduced. Damn”