What’s the most awkward time you’ve run into an ex?

It's a small town in Halifax, as our Sex + Dating survey respondents will tell you.

This being Halifax, the chances of you running into an old flame or past hook-up while you're going about your life are pretty high. We might as well laugh about it, right?


“The very first time after we broke up, in Cornwallis Park,
when he was on his way to work and wearing the world's
ugliest pants.”

“At the end of a 12-hour shift working at a horse racing
track in Charlottetown. He walked in with his new girlfriend
and I thought I was dreaming for a second and my face
probably showed it.”

“Bus stop on my way home from sex.”

“Ran into a fling I broke up line for water at a music
festival.”

“I was day drunk walking home from Chocolate Lake. He was walking towards me with his new lady friend. I didn't have my glasses on so I didn't notice until he was right in front of me. I didn't know how to react so I double queen waved.”

“Still haven’t run into him after two-plus years. Success!”

“In the middle of a fight with partner.”

“At a gas station, pumping gas next to each other, refusing
to acknowledge each other.”

“At his parents’ house. I was dating/fucking his bro, who
had me over to meet his parents.”

“While working with my recent break-up, my the store. Then my current crush who I was trying to see also walked in. All three still somewhat in with me in some way. The vibes: -_-”

“In the grocery store, looking frumpy in the chip aisle.”

“My best friend dated my ex’s brother. I attended her grad
party and his whole family and were there. He
cheated.”

“Trying to wave to my neighbours at the Waterfront and the guy I lost my virginity to (in a different province, 12 years ago) jokingly waved back and then recognized me.”

“At the far end of a beach with my new wife, with really
nowhere to go.”

“Every day at the skate park.”

“A month after we broke up, I was out for brunch for my
birthday with some friends and he walked in. It was the
first time we'd seen each other since we'd broken
up... he was on a date. He came over when I was
leaving to give me a super awkward hug and say ‘Happy
Birthday!’”

“When I saw a naked portrait of her for sale on a street
corner.”

“In his house, while hooking up with his roommate.”

“Watched a cat get run over. Looked up and he was on the
of the road.”

“When I came home with the guy I was currently dating
and, as we pulled into the driveway of my apartment
, the headlights picked up my under
my apartment tossing belongings I had left at his place
onto the balcony. I might have been a touch unclear that
we had broken up and I was dating other people until that
point.”

“In the doctor's office, when he was there for drug testing
and I was getting a birth control refill.”

“Just left work, standing on the corner waiting for my
current boyfriend to pick me up. Ex-boyfriend walks up to
me, but not really cause he’s going into the building behind
where I’m standing, and he ignores me completely.”

“At a bar. I ended up not having a place to crash so she
offered me a spot in a tent at their campsite and then
fucked her girlfriend like three feet from my head for two
hours noisily in tent.”


“I had an ex and his family come to the restaurant I served at. His mom introduced me to her current boyfriend as ‘That girl who broke [ex's] heart.’”

“We had just broken up after living together for three years
and I was on a date. He was waiting for the bus. I walked
by and he didn't say a word or look at me. I turned around
and took the keys to our place (that I had moved out of a
month ago) off the key ring and handed them to him. Still
didn't look at me or say a word. My poor date was
confused.”

“I had a massive breakup years ago and rebounded with
this girl I don't even remember the name of but she
LOVED me. She came into my work one day and I had the
entire staff giving me hand signals so that I could avoid
her.”

“There was one day where I ran into three guys I dated in
one day. Part of the reason I left Halifax the first time.”
“Standing on a street corner, bra-less in a black t-shirt and
shorts lighting up a smoke in stress. (I don’t usually
smoke.)”

“Our mutual friends’ (who had hooked us up) wedding. He
was there with his new wife. I had no date and barely
knew anyone.”

“Walked in to have breakfast at a restaurant in Toronto.
Turns out it was my ex’s brother’s and she was the
manager. It got weird because the last time I talked to her I
was drunk and somehow forwarded her my night-before
gushing email to the girl I started seeing while she was in
NY on her birthday. So anyway, she hated me so when I
showed up to the restaurant with the girl that was in the
email I forwarded it was awkward. Lemonade was good
though.”

“$Rockin’ 4 Dollar$. They walked in as my band was about
to start and I forgot how to play .”

“At a mutual friend's Christmas party, where he spent
considerable time looking down my dress. His wife still has
no idea that we were ever a hot and heavy item.”

“Making out with partner.”

“When she arrived home unexpectedly and caught me and
her younger sister in the act—in HER bed.”

“They came into where I was working and I 100 percent
did not know their name so I literally gasped, and then hit
the deck. My coworker covered for me but , never
again.”


“Was with current girlfriend and saw three exes at the same restaurant.”

“Ran into her at her new workplace, not knowing that she
and her new partner had started this business. I think I
was being when the new guy walked around the
corner and I'm certain he saw the look in my eye as I
realized their relationship. Oh well.”

“Met an ex at a store with my wife and daughter who was
eight-months preggers. Daughter hugged my ex (hadn't
seen her in 10 years) and my recognize her and
thought the baby was mine.”

“I got coffee where she worked stupidly and she was all
like, ‘Hit me up,’ and I was all like, ‘I'm sorry, but I have to
hate you, sorry.’”

“I was hanging out with a guy I just met and then my
into the room and introduces him as her boyfriend. I
just happened to have had sex with her LAST NIGHT and
had no idea she was involved with someone else.” 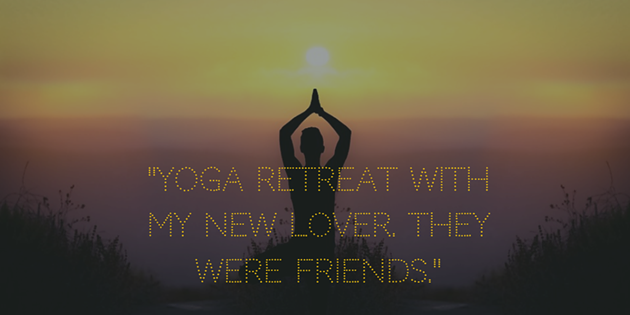