What's going on in Saulnierville and how you can help | City | Halifax, Nova Scotia | THE COAST

What's going on in Saulnierville and how you can help

People to follow, things to read, movies to watch. 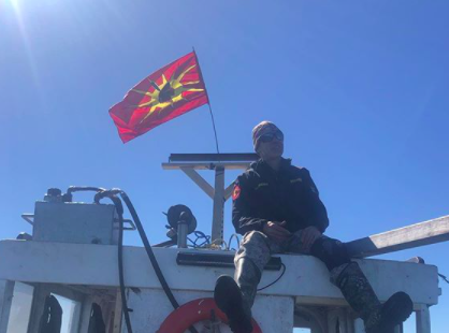 VIA @JUSTICEGRUBEN INSTAGRAM
"This was the joy felt by lobster fishers who recovered their traps that were cut. Pure joy, pure happiness, couldn’t knock that smile off their faces. Powerful and emotional moment. So beautiful to witness."


Right now Mi’kma’ki fishermen of Sipekne'katik First Nation in Saulnierville are fighting for their right to fish and being met with extreme pushback from local fishers. But why?


It all started at the beginning of the month when DFO was pulling Mi’kmaw lobster fishers' traps out of the water.  Although Indigenous fishers like David McDonald were issued a communal food license which in turn allowed them to lay lobster traps, there was still pushback from non-Indigenous fishers in the community.


Pushback that only worsened with Mi’kma’ki fishers came together in Saulnierville September 18 to distribute the five issued fishing licences to the community and launch their first “moderate livelihood fishery.”


Mi’kma’ki fishers say they’re fighting for their right to earn what’s being called a “moderate livelihood” through fishing, a right which was reaffirmed by the Supreme Court of Canada’s September 17, 1999 decision in the Donald Marshall case. In that case he won the right to fish without a DFO-issued license based on a treaty right to hunt, fish and gather in pursuit of a moderate livelihood, arising out of the Peace and Friendship Treaties of 1760 and 1761.


Non-Indigenous fishers say it’s not fair and moderate livelihood has never been clearly defined. They also say “moderate livelihood fisheries” are a threat to the Nova Scotia fishing industry—citing sustainability and conservation. But people siding with Indigenous fishers say it’s not about a definition and it’s not about the industry or even preserving wildlife—- it’s about control and not so veiled racism. Indigenous activist Justice Gruben says commercial fishers have the potential to make anywhere from $200-500,000 from commercial fishing where in contrast indigenous fishers are able to make $30-50,000.


Here are some resources you can access to better help and understand the issue.

You can start by following Idigenous activist Justice Gruben (@justicegruben) on Instagram where she posts updated info-graphics to help break down the situation in a visual way.

Maureen Googoo (@Mgoogoo) is an award winning journalist and owner and editor of Ku'ku'kwes News where she reports on Indigenous issues. Goo Goo is from Sipekne'katik and for the past day she’s been down at the Saulnierville wharf talking to Indigenous fishers.

Activist Hannah Maltay is frequently posting resources about how to help and get up to date with what's going on in Saulnierville. She’s currently on the ground at the wharf posting updates about what she’s seeing first hand and is a good resource for trustworthy places to donate in support.


Warrior Life podcast talked to Cheryl Maloney, a Mi'kmaw leader and author from Sipekne'katik. She shares what is happening on the ground in Mi'kma'ki where non-native commercial fisherman are engaged in racist acts of violence, threats, property damage and attempts to stop Mi'kmaw peoples from fishing.


Canadaland podcast talks to APTN video journalist Trina Roache about the current Saulnierville situation as well as the term “moderate livelihood” and CBCs involvement with the story.


On their podcast Sandy and Nora, Sandy Hudson and Nora Loreto ask the question "Is white supremacy intensifying?" looking at what's happening in Saulnierville and other instances of white supremacy across Canada.

Is the Crown at War with Us? is a NFB film recounts what happened when Indigenous fishers in Burnt Church New Brunswick acted on their right to a moderate livelihood after the Marhsall decision of 1999. It's an eerily similar tale to what's happening now, 20 years later, in Nova Scotia.

The Mi’kmaq Rights Initiative is the group that represents the negotiations on behalf of the Mi’kmaq of Nova Scotia, with the Province of Nova Scotia and the Government of Canada lists the various treaties including the Peace and Friendship treaty on their website. If you've ever begun a meeting with a land acknowledgement, this is a good way to take further action in actually acknowledging that land.

Activisis have been sharing ways folks can get involved from pressuring local businesses to take a stand to taking action yourself. You can have an email sent to the DFO on your behalf here, or send one yourself to DFODFO or the minister of fisheries and oceans Bernadette Jordan


You can donate directly to frontline workers/fishers by emailing or e-transfering Chief Andrea Paul or Tara Marie Francis. They ask that you please specify what the funds are being sent for.


If you're in the mood for a road trip, you can drop off supplies to the wharf at 60 Saulnierville Road. Things needed are warm clothing, blankets and tarps.

Editor's note: If there are resources you think should be on this list, let us know in the comments.