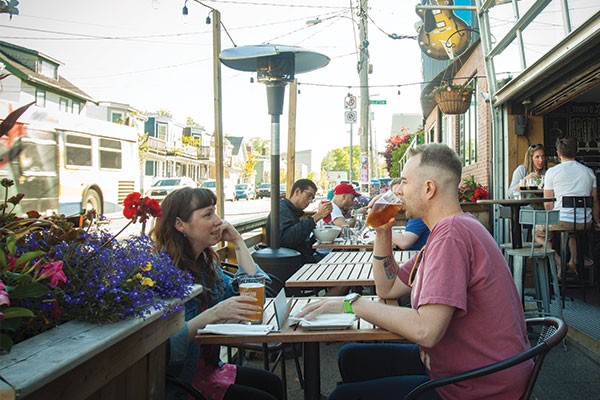 To help restaurants out, city council might kick fees for sidewalk patios to the curb. LENNY MULLINS

Council continues to chug forward in the direction of deciding on its budget, and in the meantime is making some decisions around illegal dumping, sidewalk cafe fees, a Framework for Africville and apparently another policing review. Here’s what’s on the agenda this week. Follow along with me over on The Coast’s Instagram Stories to find out how the meeting unfolds, starting at 11am on Tuesday, April 7.

Restos to save a couple bucks with waived sidewalk cafe fees

For the second season in a row (yes, the second season of Covid is here), HRM is moving to waive the fees restos normally have to pay to put out a patio on the sidewalk. This will leave HRM about $40,000 short in its budget, but is aimed at making things easier for restaurants in these trying times. Patio szn is almost here. Blessings are upon us.

The company that is currently procured to do Halifax’s winter salting is doing a bit of an ownership shakeup, so the contract is on the agenda this week. In the 2020-21 budget, Halifax Regional Municipality budgeted $1.5 million for salt.

Devonshire Avenue up for a facelift

Devonshire is one of several streets up for the AAA bikeway network, but traffic and speed are currently keeping it from being able to have the AAA designation. This work will see some tactical AKA temporary improvements to the area, and maybe some extra concrete curbs or planters.

The former Nova Scotia Home for Colored Children property, owned by Akoma Holdings Inc., is about 320 acres of predominantly vacant land off Highway 7 in Westphal, reads the staff report. The home, opened in 1921, had a legacy of systemic and institutionalized racism. The vision “includes concluding the ongoing renovation and occupying the former Home building and developing the remainder of the site as a cultural community centre with commercial recreation uses, a mix of market and affordable housing options, educational and training facilities and employment opportunities,” says the staff report.

Staff has returned to council relatively quickly with the second reading of HRM’s proposed new rules around illegal dumping. When council discussed these rules at the first reading, there was a lot of enthusiasm for shame-and-blame tactics to change behaviour. Get the details on the debate from our video-recap of that meeting. Comments about the proposed rules can be emailed to the clerk’s office until noon on Tuesday

Another policing review is on the table

Councillor Tony Manici, previously a commissioner on the Board of Police Commissioners, is asking for a review of policing services that would evaluate and make recommendations about effectiveness and community safety standards of the current division of policing between Halifax Regional Police and the RCMP. This would be the third police-related review in Halifax—and it’s not clear why this would not be already included in councillor Waye Mason’s motion for a wide-reaching review of police services for all of HRM. The other report is under the board’s wings right now, busy consulting the community about how HRM should define defunding the police, and bringing recommendations forward on potential for police reform.

Could Highway 107’s Exit 18 in Mineville get a park-and-ride?

Councillor Hendsbee hopes so, so he’s bringing forward a motion to get staff to look into it. It’d act as a supplementary bus stop for the current 370 rural express route.

Framework for Africville visioning process on the table

Councillor Lindell Smith wants to get staff to start working on what will eventually become an Africville Visioning Process including community engagement between HRM and organizations working on behalf of the descendants of Africville, reviewing the 2010 Africville Agreement, revisiting the 2003 Bayne Street Master Plan, looking at land specifically dedicated to descendants of Africville, and possibly using the Africville Visioning Process to address the ongoing lawsuits against HRM and maybe solve some of them outside of court.

Councillor Pam Lovelace wants to see a staff report that looks at shifting some of the tax rules around transit and getting more funding for rural transit.