You don’t need a crystal bottle to find out what new beers local breweries are planning for the autumn drinking season, you only need this fall forecast from Christine Beevis

You can feel it in the air: after a short summer, all of a sudden fall is upon us. The leaves are turning, pumpkins ripening and the hop fields are ready to be harvested. Summer makes for a busy patio season, when crisp and cold are the main attributes people look for in their beer choices. With appetites changing as the weather does, fall is the time for brewers to slow down and produce some of their more creative seasonal brews.

Here is our lowdown of the city's upcoming fall releases by Halifax's local brewers.

Propeller Brewery
2015 Gottingen Street, 422-7767
For a second year running, Propeller Brewery and Sea Level Brewing will be repeating their popular Alpha % Dog Wet Hopped Collaboration Ale. Made with hops harvested at both the Sea Level farm and Lazy Acres, it features 100 percent Nova Scotian hops and will be ready mid-September.

Straight on the heels of that brew, Propeller will be releasing its successful Pumpkin Ale---which tastes almost like pumpkin pie in a bottle. Made using Howard Dill's world-famous Atlantic giant pumpkins, the beer will be available in early October.

Once pumpkin season is over, Propeller's Bobby Zacharias and Hart & Thistle's Greg Nash will be collaborating on a beer that showcases both brewers' divergent (read: traditional versus off-the-beaten-path) strengths.

Although the details have yet to be nailed down, the brewers are contemplating something like a big imperial extra special bitter or a double IPA brewed with more traditional hops. Look for this unique brew sometime in November.

Granite Brewery
6054 Stairs Street, 422-4954
The Granite Brewery's Old Cardinal Abbey Ale and Hopping Mad Ale have been so popular that they are now on year-round. Granite now has nine beers on tap and they don't have room for much more, although brewer Kevin Keefe says he may contemplate something later this fall, so stay tuned.

Garrison has two September seasonals: Oktoberfestbrau (in stores now) and a repeat of last year's wet-hopped 3 Fields Harvest Ale (by September 16). This year it's actually a four-fields harvest, as hops have been supplied from the Nova Scotian Meander River, Wysmykal, Ross Museum and Fiddle Hop farms. Word is that the crop quality was excellent, so look for a fresh hoppy taste.

Hart & Thistle Gastropub & Brewery
1869 Upper Water Street, 407-4278
The Hart & Thistle's Greg Nash is looking to keep tanks full while he moves over to brew full-time at Rockbottom Brewpub (see "Nash hits Rockbottom," below). In taps now, the slightly unusual Weezen Hammer ---a full, round and soft weizen that's also crisp, with a tartness from the malted wheat. And September 7 was High Voltage Double India Pale Ale's debut, promising what Nash describes as "one glorious hop bomb."

Following that, Nash will be brewing his own wet hopped beer, with hops harvested from Quebec, sometime this fall. 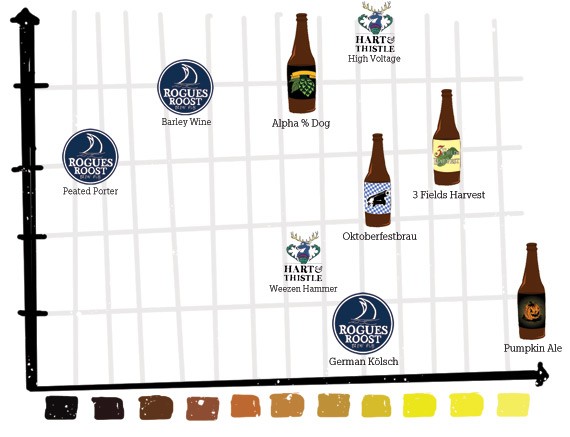 Rogue's Roost Brew Pub
5435 Spring Garden Road, 492-2337
With three, maybe four, seasonal recipes slated for the fall schedule alongside the brew pub's standard line-up, it's clear somebody enjoys their job. That someone would be brewmaster Lorne Romano, who started craft brewing at home 35 years ago---before he'd reached Nova Scotia's legal drinking age. Romano has been making Rogue's small-batch beers since the pub opened, 14 years ago, and he'll be drawing on a world of taste and experience for fall.

Mid-September, Rogue's will start serving a German Kölsch. Then comes a Peated Porter in November, using malt imported from Scotland to create a rich brown brew with hints of chocolate. That'll be followed by a Barley Wine in Decemeber, a nine-percent alcohol brew that Romano hasn't made for a couple years, which will taste of raisins, rum and caramel.

The fourth beer Romano has up his sleeve is a Belgian Trapist-style double. One of the challenges of small-batch brewing is making sure the supply of beer keeps up with the demand. Depending on how Rogue's meets the challenge, the Belgian will come out in the late fall, or it will be a treat to look forward to in the new year.