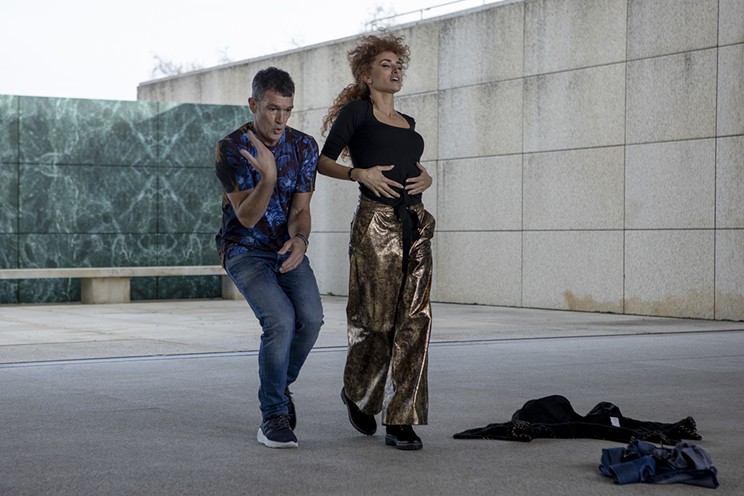 Submitted
The fest's closing flick, Official Competition, is like a glitter-doused cocktail of The Room and Jane, The Virgin.

We've waded through the fest's 150-plus offerings to bring you its can't-miss movies.

There are over 150 films on offer at this year’s FIN Atlantic International Film Festival, on from September 16-23 both online and in-person at Cineplex Park Lane. Offerings range from box office blockbusters to indie documentaries, from stories about the precursors of punk rock to teenagers managing viral fame. No matter your cinematic tastes, there’s something in this binge-watching buffet to satisfy. But if the crush of available movies has you wondering what to watch first, we gotchu with this updated-daily list of flick picks, highlighting 15 of the movies we’re most excited about.

When the clock hits 8:37 and a trigger is pulled, two teens from different backgrounds become linked forever—their lives veering onto new paths as a result. Mutual destruction awaits when we catch up with them 22 years later, as one might lose his life and the other, his sanity. Directed by Halifax’s Juanita Peters.

All My Puny Sorrows

In-person on Friday, Sep 17, 6:30pm at Cineplex Park Lane, tickets here.
Based on the smash 2014 novel by Miriam Toews (and co-written by the author), this film follows two Mennonite sisters who have left their religious life behind. As they forge a path forward, one is a suicidal concert pianist. The other is a struggling writer, grappling with her sister’s choices and making discoveries about herself in their wake.

In-person on Friday, Sep 17, 9:20pm at Cineplex Park Lane, tickets here.
An overlooked chapter of pre-Stonewall 2SLGBTQ+ history was unearthed in a box of letters written by 1950s New York drag queens. Here, delving into the unexpected trove, is a mix of original interviews, archival footage and stylized recreation, creating a documentary that sees members of a generation of the gay community telling their story for the first time.
click to enlarge

Wife of a Spy

In-person on Saturday Sep 18, 3:20pm at Cineplex Park Lane, tickets here.
Set in 1940s Japan, this flick follows a wife’s white-knuckled grip on her marriage as, on the eve of World War Two, her husband prepares to share the things he witnessed in Manchuria (then a Japanese colony).

Poly Styrene: I Am A Cliché

In-person on Saturday, Sep 18, 6pm at Cineplex Park Lane, tickets here.
The frontperson of seminal ‘70s band X-Ray Spex, Poly Styrene is the godmother of riot grrrl and afropunk. In this 96-minute documentary, her musical legacy and personal demons unfold in tandem.

Available for festival’s duration on FIN Stream or in-person on Sunday Sep 19, 1:30pm at Cineplex Park Lane, tickets here.
Despite a 200-year erasure campaign by European history, the Beothuk people of Newfoundland are alive and well. Here, for the first time, they tell their story—debunking the myth of their extinction in the process.
click to enlarge

Available for festival’s duration on FIN Stream or in-person on Sunday Sep 19, 4:30pm, at Cineplex Park Lane, tickets here.
When Indigenous teen Adira discovers a love of online streaming, her ascent to professional status and Twitch celebrity-dom come in quick succession. How will she handle the challenges that come with her newfound popularity?

Elizabeth Bishop and the Art of Losing

Available for festival’s duration on FIN Stream or in-person on Monday Sep 20, 9:30pm, at Cineplex Park Lane, tickets here.
FIN might’ve summed up why we want to see this documentary about the poet best: “So often throughout her life, Pulitzer Prize-winning poet Elizabeth Bishop's trajectory is tragically disrupted by a profound personal loss that pushes her into her worst self-destructive habits. Yet in her sixties, while grief-stricken, she courageously faces up to her most tragic heartbreak, writes her greatest work, becomes her truest self, learns to master 'the art of losing,' and earns her place as one of North America's greatest poets. Transplanted Nova Scotia filmmaker John D. Scott foregrounds how Bishop's journey is indelibly connected to her Nova Scotian heritage.”

Available for festival’s duration on FIN Stream or in-person on Tuesday Sep 21, 6:30pm, at Cineplex Park Lane, tickets here.
Halifax’s Seth A. Smith (Lowlife, The Crescent) often weaves death and mystery together in his films, to wondrously weird results. Here, he delivers the horror-tinged jolt fans will love: When a parasitologist awakes in a strange cell with other captives, the group scrambles to piece together what happened. A global plague ravaged the earth—one which the parasitologist was working to stop. As her cellmates are dragged off one by one, she must plot an escape to save what’s left of humankind.

Susan Kent, of former 22 Minutes fame, proves her show-stealing supporting role in 2020’s Spinster was the furthest thing from a fluke (not that we needed convincing) as she plays the wife to a farmhand whose dreams of acreage are growing ever-complicated.

The Electrical Life of Louis Wain

Available for festival’s duration on FIN Stream or in-person on Thursday Sep 23, 9:30pm, at Cineplex Park Lane, tickets here.
Halifax actor Amy Trefry stars as waitress Jessica who goes on a date with Eric, a handsome customer. When Eric shows Jessica a site on the dark web, she thinks she recognizes a local missing teenage boy on the page—but when she tries to report it to the police, it’s been removed. Thus, Jessica pulls a Veronica Mars to save the missing boy herself—her own past trauma bubbling up along the way.

In-person on Thursday Sep 23, 9pm, at Cineplex Park Lane, tickets here.
Before there was Salt, Fat, Acid, Heat; before the first brick was laid in Martha Stewart’s empire; before we were all armchair foodies, there was Julia Child. An unlikely, late-in-life celebrity who basically invented cooking shows and power cardigans, the doc Julia isn’t the first movie to cover the legendary cook, but its mix of first-person narrative, archival footage and food cinematography makes it hungry for the title of the best.

FIN wraps its 2021 event with a gala screening of this star-studded flick (Penélope Cruz, Antonio Banderas and Oscar Martínez all co-star) that feels like a glitter-doused cocktail of The Room and Jane, The Virgin: As a wealthy entrepreneur considers his legacy, he sets out to make the greatest movie ever made. In his quest, he hires an esteemed director, who makes two leading men to spar for screen time in a feud that'd make Rogelio de la Vega squirm.