What to expect when the Portapique Mass Casualty Commission public proceedings begin this week | News | Halifax, Nova Scotia | THE COAST

Families of those impacted by the mass-shooting tragedy have expressed frustration with delays and concerns about the process.

The public part of the Mass Casualty Commission—the expensive, slow-moving inquiry into what happened when a gunman dressed as an RCMP officer shot and killed 22 Nova Scotians in April 2020—starts Tuesday, February 22. That's four months later than first planned.

The joint federal and provincial commission will open public proceedings tomorrow at 9:30am at the Halifax Convention Centre on Argyle Street. The first day is scheduled to include opening remarks, a panel on mental health and orientation to the commission’s resources, wrapped up by closing remarks.

The public inquiry announcement is only a first step: Because maybe the government is using righteous citizen outrage to distract from deeper issues related to the mass shooting. 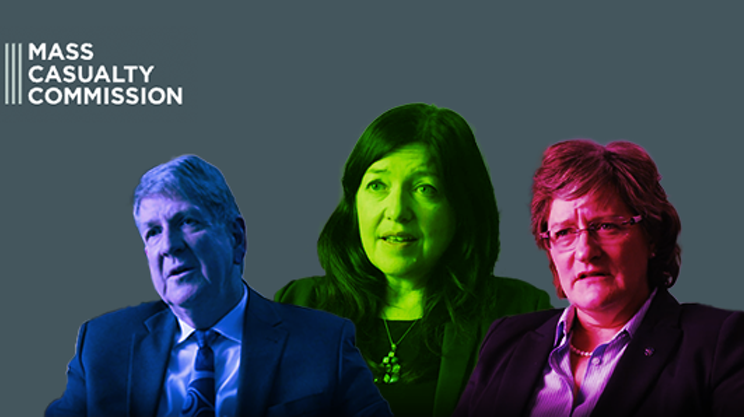 Pilot Picasso reflects on a tough year after Portapique: Aerial artist Dimitri Neonakis flew a heart over Nova Scotia—and stole all of ours.

Families of those impacted by the Portapique tragedy have expressed frustration with delays and concerns about the process, which they expect will fall short of the fulsome inquiry they pushed for. Some say they are feeling let down by the commission. Some families (represented by Patterson Law) are worried the public hearings will not adequately explore evidence surrounding the events of April 19 and 19, 2020.

The public proceedings will start by looking at the events that took place over those two days in 2020. Beginning in the spring, phase two of the commission will focus on how and why the mass killing occurred. The third and final phase, expected to start in the fall, will consider recommendations for preventing a similar tragedy. An interim report is due May 1. The final report, findings and recommendations are scheduled to be shared almost a year from now, on Nov 1, 2022.

The first week of hearings will focus on the places and communities in Colchester County where the tragedy took place. The second week will look at actions of first responders and examine what took place during the gunman’s 13-hour massacre.

The 60 people or groups who will formally participate in the commission include 27 families or family members of the deceased; six police services or groups; nine gender-based organizations; three victim advocacy groups; a firearm rights coalition; and a gun control coalition. The federal and provincial governments, which includes the RCMP, have participated in the process since the outset. The commission has yet to provide details about the witnesses who will be called on during the public hearings or who will be able to question them.

The commission is led by a team of three: former Fredericton police chief Leanne Fitch, Nova Scotia Chief Justice J. Michael MacDonald and Toronto-based lawyer Kim Stanton, who was appointed after former deputy prime minister Anne MacLellan withdrew from the inquiry. Before public hearings even begin, the commission’s costs have reached $13 million. The total cost will be split between the federal and provincial governments.

All public proceedings will be livestreamed at the Mass Casualty Commission’s website, where a calendar is also available.

If you are experiencing overwhelming emotions, distress, or a mental health or addictions crisis, or are concerned about someone who is, the Provincial Mental Health Crisis Line is available 24 hours a day, 7 days a week. This service is for all ages and you can call for yourself or because you have concern for someone else. You do not have to be in a crisis to call, and nothing is too big or too small a reason to reach out. The staff responding when you call are skilled crisis clinicians. The NS Provincial Crisis Service can also provide the contacts for other 24/7 crisis services if you live outside of Nova Scotia.