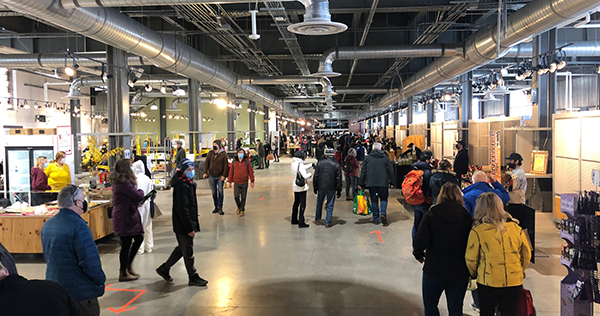 With friendly faces in a new space, the Seaport Market is at once familiar and different. THE COAST

What to expect at the new Seaport Market

Who’s who and what’s changed at the relocated weekend destination.

The Halifax Seaport Farmers’ Market opened last weekend in its new space at Pavilion 22, immediately beside the Canadian Museum of Immigration at Pier 21. It’s just 350 metres south of its former waterfront home, where the market had been since opening in August, 2010.

On Saturday morning, the crowd was strong. Because of COVID-19 capacity concerns, the market has been counting shoppers on the way in and out of the market–security told The Coast that about 1,500 people had come into the new space by 11am, while only half that number was typical at the old market in recent weeks.

The Halifax Port Authority, which manages the market, says 54 vendors opened to customers, bragging in its press release that this “compares to 30 at the previous location last Saturday.” (Although the market’s website lists 70 vendors, several are outdated, and the map still links to a long-ago visual of the old market.)

Vendors who made the move include to-go food the likes of Amin’s Indian Food and Bliss Bowls. Not knowing how much traffic to expect, Julien Bakery’s and Boulangerie la Vendeenne erred on the side of caution and didn’t bring as much bread as usual–both selling out quickly.

The new space had other familiar market attractions: Fresh veggies from Noggins, fresh meat from Windy View Farms, coffee from Laughing Whale. And it welcomed back a whole aisle of crafty vendors, who hadn’t been at the old building for months because the second-floor space, where many of them were located, was shut down due to C19.

But other vendors like Ashwurks did not move to the new location, choosing to move into one of seven separate-entrance shops surrounding what will become The PIER, a Silicon Valley-inspired tech hub for transportation companies like CN Rail and PSA Halifax. 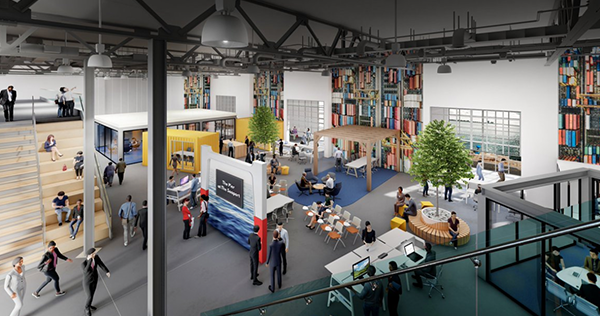 Port Of Halifax
All it's missing is a pingpong table and The PIER is basically a tech bro's dream.

And some vendors won’t be at the Seaport again. In a post, Gourmandises Avenue Chocolatiers said its current storefront location at the old market will be closing after Easter on April 5.  The couple behind market long-stay Chenpapa decided to retire rather than move, finishing up at the old market late last month.

Trinidadian Doubles Plus owner Aleem “The Dream” Ibrahim–another vendor who made the old Seaport Market what it was for the past few years–passed away earlier this month.

Shawarma Stop owner Tony Nahas also announced his closure after 25 years in business. “Our family would like to thank you all from the bottom of our hearts for your loyalty and support over the years,” he said in a Facebook post.

Scotian Ironworks also decided not to make the move to the new market after the old market closed. “Feeling a little sentimental, today Scott packed up his display and bid the Halifax Seaport Market a fond farewell. Scott is not retiring from blacksmithing, but will be working from his shop in New Ross, focusing on ‘custom’ ironworks,” says a post on Facebook.

The new market had far fewer vendors on the Sunday of its opening weekend. Long lines for the sole Sunday food vendor Bam Bam’s Bagels, and no seating within the market, made some customers at the Pavilion 22 space pine for the glory days at the Seaport building–which pre-Covid was packed with Haligonians eating all sorts of treats and sipping coffee on the expansive built-in wooden steps, while listening to live music as nearly 200 vendors greeted customers on busy Saturdays.

The market promises to be open next weekend Saturday from 8am to 2pm, and Sunday from 10am to 2pm. By late spring, it will move outside to the Pavilion 22 parking lot, where a “dedicated structure” is being built.

“With this latest move, [the market] will see a return to fundamentals – great weekend vendors selling their own produce and products to loyal customers they call friends,” says the Port Authority’s latest release. “We hope everyone will join us for this next step on this journey together.”