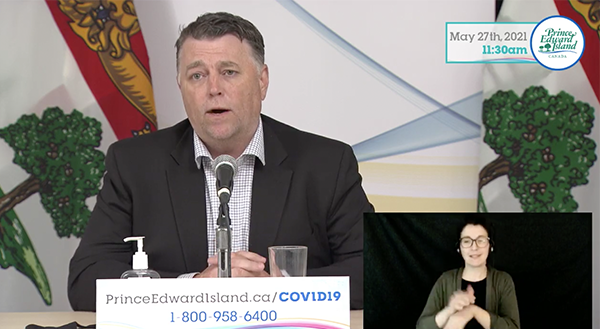 PEI is ahead of NS in announcing its reopening plans, but that may set a helpful precedent. VIA FACEBOOK

Prince Edward Island plans to open its end of the Atlantic Bubble as early as June 27.

This morning, PEI announced that it will be reopening in five stages as part of what it calls the Moving Forward plan. It begins June 6 and continues through the summer, with final restrictions being lifted in the fall once population immunity of 80 percent is reached.

“It is a cautious, careful and measured approach,” said Prince Edward Island premier Dennis King during the Thursday press conference where the plan was announced. “It has been a good one for us until now, and it will continue to be the one that guides us until we get through to the end.”

With a population around 160,000 people, PEI is the smallest province in Atlantic Canada and has had the fewest COVID cases of any province in Canada. Nova Scotia is the east coast leader in both population—it’s six times bigger than PEI—and COVID. At last count, PEI’s had 200 cases during the entire pandemic, and one new case in the past seven days; Nova Scotia had 392 cases in the last week, for a pandemic total of 5,457 infections. How could PEI’s experience be relevant as Nova Scotia plans to announce its own COVID reopening plan tomorrow, May 28?

5 charts for 5,000 cases: Play with these data visualizations to get inside Nova Scotia's latest pandemic milestone.

Atlantic bubble dreams for April 19 are popping: Cancel your plans to head to Moncton, and make sure your Charlottetown and St. John’s trips have a good refund policy.

Unlike some provinces, Nova Scotia’s leadership has consistently talked about the need to open slowly and cautiously. When looking for a slow approach to mirror, PEI may be the best option. Both provinces also have limited ports of entry, enabling the possibility to test all travellers upon arrival, whether it’s by air, car or boat. And because PEI is further ahead in the fight against COVID-19 than NS is, local officials can watch from afar to see how the opening measures work on the island before implementing the same ones—or tweaking measures accordingly—for our own province.

Here’s the breakdown of what PEI is doing.

Step 1
On June 6, with low disease numbers and vaccinations ramping up, the island plans to allow social gatherings of up to 20 people, allow businesses to host 50 guests or cohorts of 50 people, and increase maximum restaurant table size to groups of 20. There will be no change to travel requirements at this time.

Step 2
By June 27, with 80 percent of eligible residents receiving their first dose of vaccine (and second doses received by long-term care residents, health workers and older Islanders), the province hopes to remove the isolation requirement for travellers from within the Atlantic Bubble who have received one vaccine dose and take a rapid test upon entry.

Step 3
On July 18, with continued “increasing levels of vaccination,” PEI will allow gatherings of up to 200 people outdoors, or 100 people indoors. Sports and arts organizations will be able to have cohorts of 100 participants daily, and some non-medical mask requirements may be eased.

Step 4
By August 8, if half of all eligible residents have received their second dose, there will be shorter isolation periods for pre-screened, partially vaccinated travellers from outside Atlantic Canada, and restaurants and bars will no longer have to close early.

Step 5
Finally, by September 12, PEI hopes to have 80 percent of all eligible Islanders fully vaccinated, and can enjoy the benefits of establishing herd immunity in the province. There will no longer be pre-screening for Canadian travellers, and most other regulations, including masks and social distancing requirements, will be able to be lifted.