Proof from our Sex + Dating survey that what goes around comes around.

Circle jerks aren’t for everyone, but there’s a lot to love about a cycle of self-love. The idea of yesterday’s hot experience powering today’s sweet release sounds too good to be true, like turning lead into gold. However, the relationship alchemists who answered this question in the Sex + Dating survey reveal just how magical a good memory can be.


“The girl I made out with at Pride last summer.”

“That mountain-man looking guy who used to chat me up while I was working as a liquor store sampler. So wrong but so right.”

“Sex in the woods in Keji.”

“Receiving oral sex in the back of my ex’s car. Best sexual memory ever.”

“Ex-partner cheating and describing it in detail to me.”

“We were on a shuttle from an outdoor concert to the parking lot and I slipped my hand into her cutoffs to finger her. She was wet and touched me too. I pushed her up against the car and pulled down the cutoffs and fucked her from behind against the car. She came, told me to do the same and I did. We got in the car and saw lights go on in a nearby vehicle which beeped the horn as it passed by.”

“My girl working out in her sports bra.”

“I finally got to sleep with my crush after a year of pining him, and it was amazing. We didn't end up dating, but that memory will last a lifetime.”

“After having amazing sex with one of my partners I pulled her back onto me and started again, when she realized we were going at it again she made a subtle little sound that was hard to describe—almost like a squeal of excitement mixed with a giggle. I can almost still hear it when I think of it.”

“Sucking off the ex-wife’s boyfriend.”

“If I did, it would be the way he used to bite my nipples.”

“A one-night stand I had that was super. It was my first ‘rough’ sex experience and the guy was SO caring and generous, but also gave me exactly what I wanted.”

“This girl in year. Massive squirter. Really hot and messy. She said it was her first REAL orgasm. I felt like a champ.”

“Feeling a thick ole penis slide into me.”

“The partner of a friend dropped over one afternoon with a bottle of wine and decided to show off her body, which I'm sure she knew I admired. I couldn't figure out if she was really coming on or just in a mischievous exhibitionist mood, so nothing happened. But I completely enjoyed the views and have held on to those memories for over a decade.”

“I usually take a good memory of fucking around with someone that didn't lead to sex and then actively think of all the dirty ways it have gone. If I made out with one woman, I'd think about how I'd eat her out if things went further. Was I felt up by this guy I'm into but didn't fuck? Well, I'd have to imagine when, where and how I'd come on his face or how he'd bend me over. I got a real active imagination over here and it's always so much more fun elaborating on the potential a flirty relationship may have than something you've already done.”

“A guy I have a super huge crush on was dancing very close to me and put his hand on my back and I swear to god, I felt more excitement in that moment than any sexual experience.” 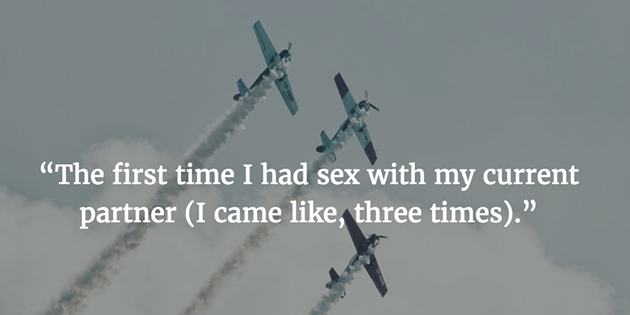 “Scissoring with a former girlfriend.”

“While in an open relationship, I came home from a date to find my partner having sex with her girlfriend. They invited me to join in.”

“Riding faces all over town.”