A first-year Dalhousie student tells us about her experience. 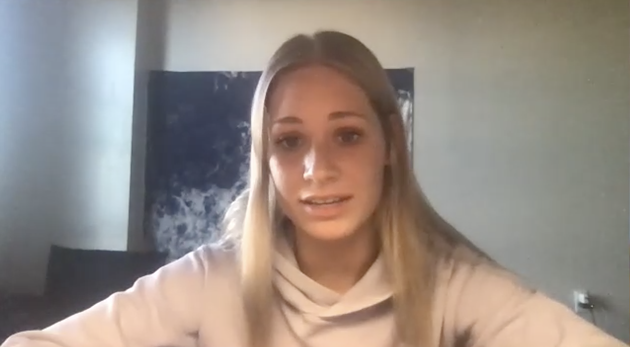 The Coast
First-year Dalhousie student Katherine Jetleb is currently isolating in a temporary dorm room.
Ready or not, students are back in Nova Scotia this fall. They come from far and wide, and they’re stuck in quarantine if they’re from outside the Atlantic bubble.

Last week, a student at St. FX University in Antigonish was ticketed $1,000 for failing to self-isolate, setting a strong precedent for university students not to leave their dorm rooms until after their two-week isolation and mandatory triple testing.

Here in Halifax, about a thousand students are isolated at Dalhousie, inside Coburg Road’s Howe Hall residence. No matter which residence students are in for the year, the two-week isolation is waited out within one of the Howe Hall houses.

“Next week on Saturday I’m moving into Risley Hall, which’ll be my permanent residence,” says Katherine Jetleb, a first-year kinesiology student who arrived in Halifax from Ontario on August 21 and went straight from the airport to her dorm.

The new student was so excited that Dalhousie was offering residence as an option that she says she’s willing to put in the work and quarantine upon arrival.

“A lot of schools in Ontario don’t have res at all,” Jetleb tells The Coast in a Zoom call from her dorm. “I didn’t care, quarantine me for as long as you want as long as I can have res.”

Stationed at the front of the residence building are security personnel, who ensure only students living there are allowed in and out for their daily dose of exercise.

“We’re only allowed to leave our rooms for like the bathroom, and we’re allowed short walks on campus, but we have to have our masks and we can’t social distance walk with anyone–you’ve got to completely be by yourself,” says Jetleb.

Students are also not permitted to eat in the on-campus dining halls until they officially open on September 5. In the meantime, students in quarantine can take their pick of food delivery apps like Skip the Dishes, Uber Eats and Instacart.

“We have to order food and we’re not allowed to leave our room to go get it, the food has to be delivered right to our door,” says Jetleb.

Although she ordered a mini fridge to help with the food cost and stock up on sandwich supplies, Jetleb says ordering takeout is getting expensive.

“I would rather be eating in meal hall just cause yeah it is expensive and it’s hard too, cause all I have is a fridge so I can’t really cook meals or anything, it’s just sandwiches and stuff. Which is fine for two weeks, but I’m excited to get to meal hall to get hot food,” she says.

During the course of her isolation, Jetleb says she’s already received two COVID-19 nasal swab tests. “They were both negative. I got the results back pretty much next day, so pretty fast,” she says.

Her last test is on September 1, three days before her isolation ends.

When she first arrived, Jetleb posted about her experience in residence on TikTok, poking fun at the flaws of the older residence and quarantine experience. “Obviously every residence has issues,” she says.


But Jetleb says she’s actually enjoying living in residence, and can’t wait to meet her new classmates after taking a gap year off last year.

“Classes are exciting, meeting new people and seeing a whole new city. Like, everything about it’s so exciting,” adds Jetleb.

The frosh student didn’t manage to get tickets to Dalhousie’s sold-out0 in-person frosh week events (attendance is capped at 250 because of Covid restrictions). As for the first thing she’ll be doing when she’s out of isolation?

“Move into my res and meet as many people as I can,” she says. Socially distanced, of course.