What inaccurate sex myth did you believe for far too long?

The most outlandish and incredible untrue sex stories our Halifax readers grew up believing.

Between public health education in schools and Google Dot it's a wonder these days could grow up believing old wive's tales or playground gossip about sex. But that wasn't always the case, as these answers to our annual Sex + Dating survey reveal.

“Oh man, up until Grade 8 I thought dicks hung straight down. So I thought sex had to be lying down opposite ways, legs interlinked, crotch to crotch.”

“As soon as you kissed or made out meant you opened the door to having sex. Didn’t realize a kiss could just be a kiss and didn’t have to lead to anything.”

“Any type of sex could get you pregnant. Even oral.”

“People in long-term relationships are doin’ it all the time.”

“That it was just kissing while naked.”

“I didn’t understand what people did once insertion happens. Thought men just sat a woman and chilled?”

“I didn't know that penises got hard or went inside of anything until I was 15. I also thought that when you got married you could just decide really hard to get pregnant and that would trigger a hormonal reaction to create a baby.”

“If a guy was turned on, I somehow had a responsibility even if I didn't want to have sex.”

“What an average penis size was. Apparently, I was very lucky with most of my high school boyfriends.”

“Didn’t know about the clit until 25, so, like I failed at least 12 ladies miserably. Ashamed and apologetic.”

“The most inaccurate thing was thinking that there was a normal.”

“The hymen is supposed to rip and it should hurt the first time a woman has sex.”

“When I was four or five a little boy told me that sex was when the dad peed in the mom's mouth. I was disturbed.”

“I thought an erect penis went straight down parallel to the legs, and the lady had to have her head at the foot of the bed and slide up onto it.” 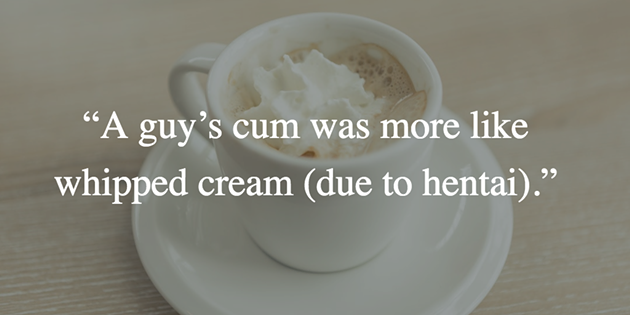 “The fact that breasts have a bunch of ‘holes’ where milk comes out of, not just one.”

“People who had a lot of sex would get STIs. However, I took this to be very literal. I believe that STIs were quantitatively linked to the number of times a person had sex. If they had sex once, with whomever, they were fine. If they had sex 100 times with the same person or 100 different people, they would eventually, independently manifest an STI. I didn't understand that it was a communicable infection but rather something akin to developing a callus. Rub that spot long enough and you're gonna get one. I believed this for a couple of years.”

“ knew what they were doing.”