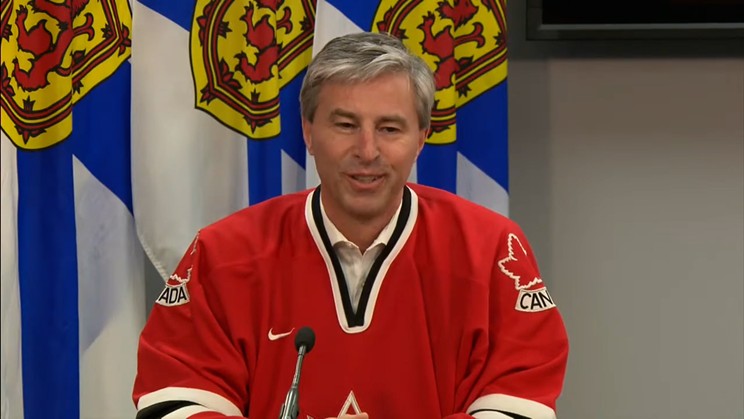 Screenshot
Tim Houston's last webcast press conference was about a hockey tournament on May 5. His last COVID webcast was March 18.

Nova Scotia’s May 19 pandemic report shows an increase to 24 deaths while new infections keep dropping, and the premier isn't saying why.

The deadliest, and most confusing, phase of Nova Scotia's pandemic began two months ago on March 21, the day premier Tim Houston removed almost all public health restrictions around masking, distancing and gathering. This was Houston's "Mission accomplished" moment, acting as if COVID was over and we could finally get back to normal, even though the opposite was true. New COVID cases increased sharply after March 21, setting the province's pandemic record for most infections—more than 1,000 cases per day on average—less than a month later.

Hospital admissions for COVID patients took off after March 21. The deadliest weeks of the pandemic have also happened since then. And chief medical officer of health Dr. Robert Strang has repeatedly recommended that people continue to mask, distance and only gather within a consistent group—his advice is essentially for Nova Scotians to carry on as if Houston hadn't arbitrarily removed the rules in place to protect public health.

Part of Houston's campaign to deny the surging pandemic has been to deny information to the public. Where the province used to give a COVID report every day, now there is only one a week, and it gives less data than before. Houston hasn't participated in a live COVID briefing, where journalists ask questions, since March 18. (The infamous hostage video, released April 6, doesn't count.) And the province keeps threatening to turn off its COVID data dashboard; first the weekly reports said it would disappear at the end of April, then the end of May, although the current report gives no indication that the dashboard really is going away next week.

This approach to information is dangerous on its face—any effective public health strategy requires a public that knows enough to make healthy decisions. And specific to the latest COVID report, Houston's silence only increases confusion.

Until that report, the trend was clear. Infections, deaths, hospitalizations: they all hit a peak in April, then started going down. Houston was premature to remove the rules in March, given all the COVID to come, but by May things were moving in the right direction and the disease was going away even without a mask mandate.

Then came the May 19 report. There were just 2,513 new infections that people bothered to confirm by PCR testing, down from over 3,100 the week before. Only 59 people needed to be admitted to the hospital with the disease, compared to 65 in the May 12 report. Deaths, however, jumped from 18 announced May 12 to 24 people dead from COVID May 19. Somehow, with infections and hospital admissions dwindling, deaths increased by more than 30 percent to reach the mark of 24 covictims, equal to Nova Scotia’s previous deadliest week (announced in the April 28 report).

How did this happen? Why are deaths going in the opposite direction from other pandemic numbers? Instead of answers, the report gives statistics that hint at reasons. “Overall, the data show that the risk of hospitalization is nearly 11 times higher, and the risk of death is nearly 114 times higher for people 70 and older compared to younger people," it reads. “Of the 24 deaths reported this week, 22 people (91.7 per cent) were 70 years of age or older. Nine people (37.5 per cent) lived in long-term care facilities.”

At another point, it says “evidence shows that immunity gained from vaccine wanes more quickly among those 70 and older, which is why a second booster dose is recommended for this group. Across all age groups, the unvaccinated continue to be at highest risk of severe disease."

There is nothing new about the disease striking older people hardest. (In early 2020 before Nova Scotia even had a case, people were calling COVID a “boomer remover.”) That means the lockdowns and restrictions that were used to curb the disease and keep everyone safe were always disproportionately aimed at protecting the olds. The real question is: What changed to make premier Houston comfortable letting the most vulnerable die in record numbers?

This is where information is needed more than silence. How many of the 24 people who died were unvaccinated? Were offered a booster and refused? Had pre-existing health conditions? How does the current death rate compare to the flu? To heart disease? To car crashes? Why are deaths rising when other COVID numbers are falling? Does the province know? Does the premier even care?

For a politician whose fortunes were made running on a platform of improving healthcare, Houston seems indifferent to dying Nova Scotians. And as premier of a province with one of the oldest populations in Canada, he looks out of touch. This is the price of his silence. This, and the 146 people who have died of COVID since Houston dropped restrictions for no better reason than the soundbite “you don't need mandates to tell you how to keep your family safe. You already know how.”

Where the latest provincial report fails to provide explanation, it at least offers acknowledgement from Nova Scotia’s pandemic leader. "Declines in new cases and hospitalizations are welcome news, but my thoughts are with the 24 families who’ve lost their loved ones to COVID-19,” says Doctor Strang in the report. “Getting vaccinated, wearing a mask, staying home when we’re sick—these are small signs of respect to those families and to the many others whose lives have been, and still are, impacted by this virus."

Houston, Nova Scotia's political leader, is characteristically silent in the report. As has become his custom in recent reports, he doesn't offer a word of sympathy or support to the families—and everyone else in Nova Scotia—trying to understand all this death.

Through 2020 and 2021, COVID killed 111 Nova Scotians. Now the provincial death toll is 378 people. And if this week's report, coming out Thursday May 26, is anything like last week's, that number will reach 400 before the end of May. Doctor Strang says we should still be masking as one of the "small signs of respect" to people "impacted by this virus." On this count, Houston has been silent. But that same May 19 day the COVID report came out, the Department of Education and Early Childhood Development announced masks will no longer be required in public schools across the province. That speaks volumes about Houston's approach to the pandemic.