Opening the door and visiting some of the quirky, stylish and warm-hearted student homes peppering the city.

By Ashley Corbett and Mel Hattie

Be it ever so humble, there’s no place like a student’s apartment. The dreadful homogeny of every new gloomy mid-rise residential complex that’s sprouting up all over the Halifax peninsula just makes the improvisational decor of student living that much more endearing. Whether it’s a six-bedroom flat shared with seven other people, or a tiny dorm room with no closet space, student life means making the best out of the limited space (and budget) available while still expressing your inner style god or goddess. The Coast went knocking on some doors around town and was invited into eight homes steeped in student personality. Some of these tenants might be your neighbours, or maybe just kindred spirits of interior design. Either way they make Halifax a little more colourful of a place for all of us.

Deepak Sharma and Jass Singh
Master’s in computer networking at Dalhousie
Sharma and Singh are international students from New Delhi, India. They arrived in Halifax during a January snowstorm, stuck at the airport and eventually payed for an overpriced cab into the city after hours of waiting for the roads to clear. The two decided the city needs a comprehensive service for welcoming international students, helping them adjust and assisting their apartment hunt. Their company, Univfax (see page 55), is geared towards that very purpose, and the business partners now live in the same South Park Street building. Singh’s apartment, where he lives with his sister (Sharma is a few floors up), is largely decorated with Bollywood posters. Sprinkling elements of Indian culture in their apartments is a practice both entrepreneurs say is really important to them. In particular, Singh points out the elephant hanging beside his door of the Indian god Ganesha. “He’s the god of new arrivals, new starts. So, we put him on our doors.”

Sam Kruger, Jonathan Brown Gilbert, Selina Latour, Josh Feldman
University of King’s College (Latour just graduated from NSCAD)
A community onto itself—seven people currently live there—this on-campus apartment at King’s always has friends dropping by. The house is a social hub and the roommates are always changing, but the love remains constant. For example, they have a system set up for communal dinners—once a week, one of the roommates is cooks everyone else a meal. It’s been a way to bring the friends together, says Brown Gilbert. “I think the blender is our best bet,” says Feldman, guessing the apartment’s most prized possession. “One of our housemates makes these crazy mixes of everything. Like, just mush.” 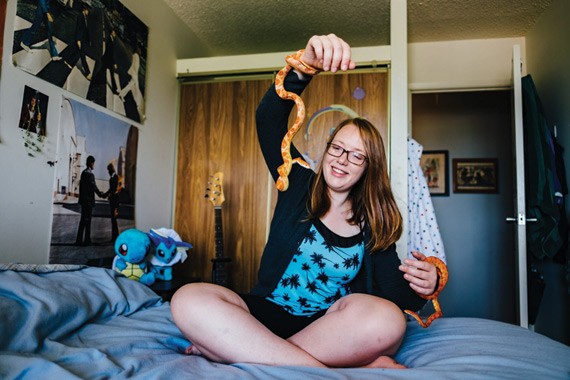 Alex Cooke
University of King’s College, journalism grad
Cooke has lived in the same apartment for three years of her degree, recently completed. She’s nested on Quinpool, and says she likes it that way. From her top-floor apartment, she can watch any major fireworks display in Halifax. It’s also close to all the amenities, and you can’t ask for much more than that, she says. Cooke has a snake named Ekans—the same species as her roommate’s snake. The two bright orange reptiles sleep in their respective owners’ rooms. “Chaotic,” Cooke says of her decorating style. “We kind of just decorate around whatever holiday is coming up, and then we just kind of take down the major stuff and leave other assorted things. So right now, we have decorations from New Year’s, Christmas and Halloween and we have a giant Canada flag hanging on our wall.”

Anna “Izzy” Isabelle
Dalhousie University, fourth-year biology and political science
Isabelle lives in a west-end boarding house, which means roommates move in and out frequently. Because its tenants are always in flux and decorating the common space isn’t allowed, Isabelle’s bedroom is her sanctuary. It’s chaotic, colourful and filled to the brim with platform shoes, wigs and knick-knacks. Japanese shawls overflow onto the floor beside emoji skirts and patch-covered, studded jean jackets. She describes her interior style as a combination of “witchy, pagan elements mixed in with really Japanese, cartoony-style stuff.” Isabelle’s obsession with shoes has, in her words, grown out of control—she now has at least 50 pairs. Her most prized possession is a sippy cup with Le Petit Prince on it—she says it saves her when she’s hungover.

Emily Truesdale and Victoria Walton
Second-year political science at Saint Mary’s Fourth-year journalism at King’s and international development at Dalhousie
Truesdale and Walton met in first year. They bonded over their joint rural Nova Scotia roots, and helped each other break up with their high-school boyfriends. The two south-end roomates live in an old house they say is “stuck in the ’70s,” along with a pet rabbit, cat and fish. Their place is adorned with empty wine bottles, dead plants and paintings Walton’s mom got from her dentist (and one prized painting of a vagina drawn by a mutual friend). “People who are grown up and have their lives together don’t want ugly furniture, so they’ll replace it with furniture that doesn’t suck, and you can swoop in and take their ugly furniture,” says Truesdale, about how to decorate on a budget. “Also Value Village,” adds Walton. 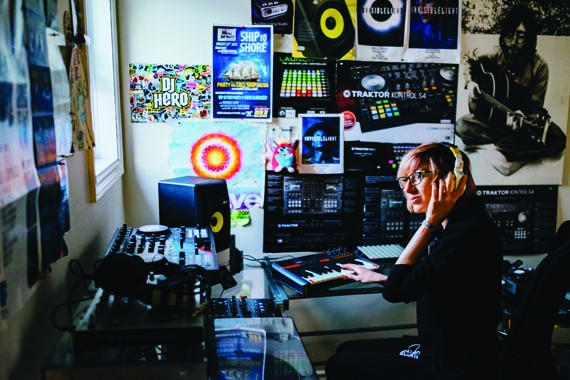 Jackie Cochrane
Hair Design Centre
Cochrane lives in a loft apartment in Clayton Park with her partner, Twitch, and their cat and bearded dragon (who sometimes sleeps in their bed). Although studying hair design, Cochrane says music is a huge part of her life. Both she and her partner are music graduates. The couple converted their loft into a music studio, decked out with DJ gear, guitars, a keyboard, a violin, band posters and laser lights. It’s a creative palace—a haven away from life’s complexities.

Mel Hattie
Alex Lush
Dalhousie University, electives in psychology and gender and women’s studies
Lush and her roommates threw a party recently for a friend, and went all out on the decorations. The entryway of their central Halifax apartment is now filled with dangling homemade jellyfish, and tin foil strewn about the ceiling. A sign at the staircase points to the bathroom—serving as a guide for the party guests and visitors. Lush has been working as a custodian at Dal for about six years now, and has built up enough credits as an employee to cover her tuition. “I want to work as a social worker, working with Indigenous women specifically, because half of my family is Mi’kmaw,” she says. “I realized how uneducated I was about all of this”—the issue of missing and murdered Indigenous women—“and I feel like sometimes when you put it into your own hands to learn, sometimes you procrastinate. I felt like I needed to get my butt in gear.”

Mahbubur Rahman
Dalhousie University, master’s of civil engineering
Rahman moved from Bangladesh to Canada with his wife and two daughters in 2013 to get his master’s. The family lives in Peter Green Hall in the south end, a building meant for students with families. It’s a largely multicultural environment, with families from all over the world living within and a daycare on the main floor. “If you’re a student and if you have family, this is the best place to be,” says Rahman. He’s especially appreciative of the chance to live there, given the building’s waiting list. Since his arrival, Rahman’s taken on many extracurriculars outside of school, including a position as vice president of finance and operations at the Dalhousie Student Union. He also received the Dalhousie Board of Governors’ Award in 2015.