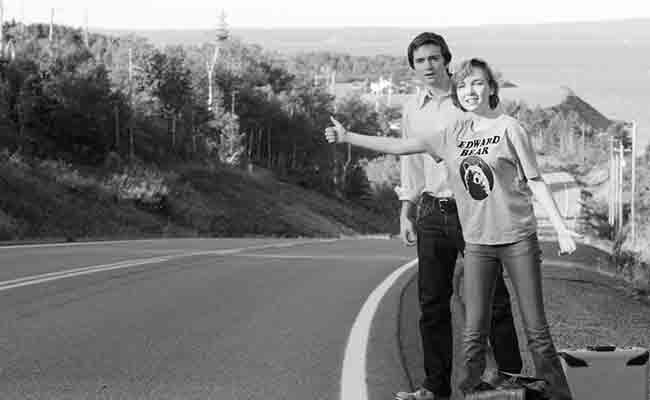 It's 1976, and Kit (Dylan Authors) is restless. It's summer in Antigonish and he wants an adventure. He devises a plan with his girlfriend Alice (Julia Sarah Stone) to hitchhike to Sydney where his bohemian mother (Molly Parker) lives. She's travelled the world, hung out at The Factory in New York—Andy Warhol (Rhys Bevan-John) appears several time as Kit's inner voice, of sorts—and represents a life he wants for reasons obvious for a rural Nova Scotian teen, and for reasons that unfold as Kit and Alice grab rides along the coast. He plans to stay. ("Goodbye sex" is mentioned several times.) Weirdos, a gentle coming-of-age story written by Daniel MacIvor and directed by Bruce McDonald, follows their journey.

Weirdos was the first film made under the newly structured provincial tax credit system, shot in beautiful black and white by Becky Parsons all around Nova Scotia in the autumn of 2014. It premiered at the Toronto International Film Festival last September and is still on the festival circuit, visiting Berlinale last month. This week it picked up two Canadian Screen Awards for MacIvor and Parker.

Though the story is seemingly structured around Kit and his quest—we spend time with his family (Allan Hawco and Cathy Jones) and he's the only person who can see or talk to Warhol—Alice quietly emerges as the film's centre, taking observational photos and trying to hold off a mounting realization about her relationship.

"Kit is very much the protagonist, except it's kind of told from Alice's point of view, which i think is an interesting thing to do on film because you don't have the first person or third person you can portray when you're writing a novel," says Stone from her home in Vancouver. She adds that Alice's photography was a key to figuring out how to portray her: "I use a lot of imagery in my character work. I put together a scrapbook for her. I used that kind of stuff as little markers throughout the script, so I could go to a scene and figure out 'OK, this is her chapter of a journey and she's at this point.'"

Though just 19, Stone is an industry vet, appearing on the third season of The Killing and the SyFy series Aftermath and starring in the indie films The Year Dolly Parton Was My Mom and Wet Bum. She wasn't intimidated by McDonald, who made Hard Core Logo a year before she was born.

"Bruce is so laid back and relaxed all the time, which is an amazing quality as a director. He made the whole set environment so nice and such a great place to foster to creative energy for everybody on the crew," she says. "He's so full of wisdom and friendliness. He's probably one of the least intimidating people I've ever met."

Weirdos is set 40 years ago in a small town, but despite the lack of smartphones the fundamentals of teenhood remain: Getting high, finding beer, hitting beach parties, fighting raging hormones, dreaming of being somewhere else.

"It's a coming of age story and I think a lot of people can relate to it at various points in their lives. I think we come of age more than once," says Stone. "With Alice and Kit's storylines, there are a lot of areas that people can relate to—they're two kids trying to find their place in the world.

"It's quite a universal story no matter where you grew up or even when you grew up. It's really a story about a shared humanity."