Weed review: What is shatter and why does it get me so high?

A little dab will do ya with THC extracts, so know more Mr. Nice and be prepared for Scout Master. 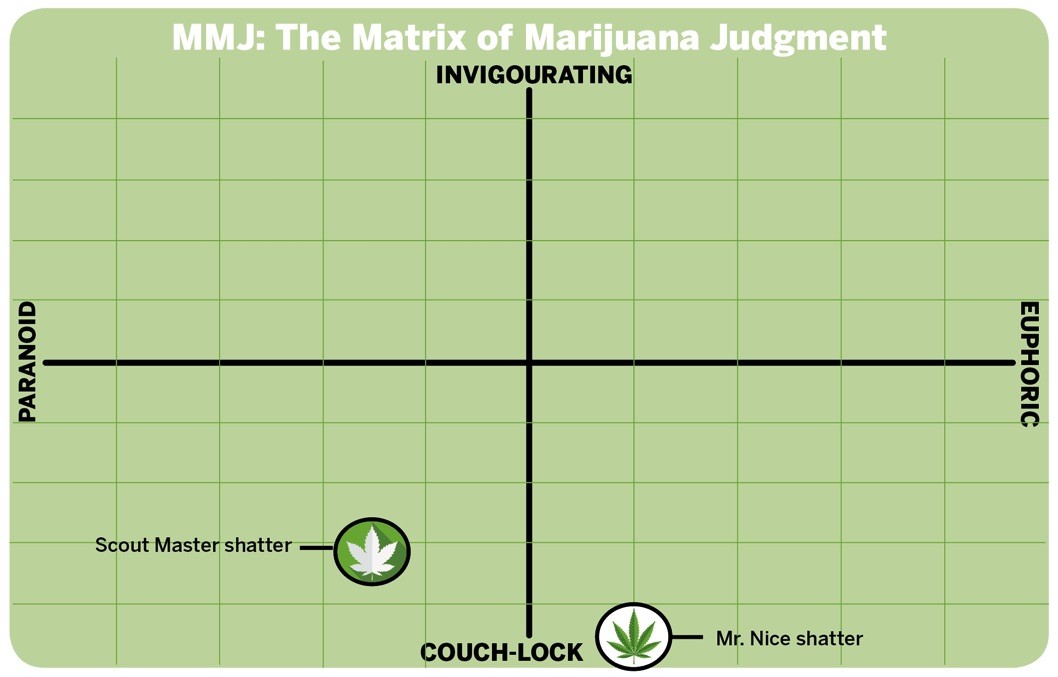 Mr. Nice would like you to join him on the couch, says the Matrix of Marijuana Judgment.

My cannabis fairy godmother Ren recently chauffeured me to Hemptation Smoke Shop, the Fairview headshop with sweet customer service and the friendliest store dog roaming around their spacious, well-stocked aisles. I dropped a pretty penny on my first vaporizer: Pax's third generation dual-use model, the Pax3. Selected based on online customer reviews and Ren's testimonials (plus the 10-year warranty), I was also jazzed about Pax3's ability to toast both dry herb AND today's a la mode marijuana extracts.

Unlike water-extracted hash or resin, concentrates are distilled from the cannabis plant using materials such as butane, propane, water or alcohol (and heat). This eliminates all plant material from the product and can raise THC potency by up to 60 percent. Extracts are categorized based on consistency: weed's active ingredients form one homogenous, caramel-like goo to make shatter, whereas the terpenes and cannabinoids separate and materialize around each other in wax.

We zoomed to Coastal Cannapy for some shatter to break the Pax in proper, and all that was left on the shelves was Exclusive Extracts' Mr. Nice. At 80 percent indica and 20 percent sativa, the Mister is a cross of indicas Hash Plant and G13 (named after the autobiography of infamous international cannabis smuggler Howard Marks). We grabbed a sleeve and before I knew it the sun had set and a million episodes of Please Like Me had passed. Mr. Nice is a heavy eyelids anxiety whisperer, powerfully knocking excess energy out of my jittery body. After weeks of compulsive pacing, I love sprinkling this shatter on night-time joints for classic stoner vibes before bed.

The next round of extract I picked up was Little Farma's Scout Master shatter, a hybrid mixing popular sativa Girl Scout Cookies and pure indica Purple Master Kush. The vaping flavours were divine, like eating creamsicles around a campfire. I chose Scout Master because enlivening sativas have been getting me through a tough mental time of late, but mostly because it was the only sativa extract in stock.

I was functionally obliterated after a few minutes of puffing a little lentil of shatter. The indica MK parent stole the Scout Master show, blanketing my mind and body into a cheerful though frustrated zombie state, as I wanted more of a #successfulstoner pick-me-up assent. Proving itself of more use when anxiety is running high, I cannot see myself toking this during more lethargic, depressive times.

Like Mr. Nice, Scout Master is great for sharing in relaxing company (in the right mood for fellow storm clouds). They'll both get the gang laidback yet talkative. I took a dedicated shatter day and went walking along the shore to catch up with a close friend. We passed the Pax as we went, able to go deep and be open about "how things are going." Scout Master blessed us with silent space for sandy toe-stretches and deep ocean breaths, between passionate discussion and good jokes. Despite being on a time crunch we still enjoyed being stoned in the sun without losing sense of time or responsibilities.

October has been a month of practicing meditation and visualization, and these concentrates have been a lovely boost to my mindfulness quest. Though I'm still microdosing energizing greens throughout the day, these strains have helped unwanted thoughts tumble past my mind's eye and dissipate like the dense dreamy vapour clouds it produces. My tolerance is so high at the moment, I have continued using shatter in joints as a way to achieve an elevated high when smoking for pleasure. Plus Little Farma seems to smoke forever—or maybe time just moves more slowly when you're earning badges as Nicest Scout.

Lucy LaPlante is The Coast's cannabis reviewer. Send her shatter chatter at halijuana@thecoast.ca.