Weed lube does exactly what you think it does | Cannabis | Halifax, Nova Scotia | THE COAST

Weed lube does exactly what you think it does

Something to toke about - Part 3 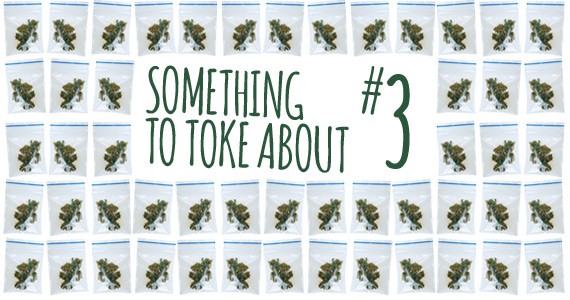 Something to toke about is a four-part series on marijuana culture. The final instalment arrives next week.

"The original point was to get pussy-high."

This is the column I don’t want my grandma to read. That’s right, folks—this week we’re talking about weed lube.

This winter, when storms were slamming Halifax and we were all hibernating, two people I know decided to get creative. My friend and his girlfriend (let’s call them Jack and Diane) whipped up some cannabis-infused lubricant. As Jack explained, “The original point was to get pussy-high.”

He found a recipe online for a cannabis lube made with coconut oil and cocoa butter. Considerate gentleman that he is, Jack thought his partner might enjoy the experience. She was totally game.

Making the stuff took awhile, but it was worth it. Jack baked three or four grams of pot in the oven, ground it into a paste and cooked it with coconut oil for two or three hours.

At the coconut oil stage it was fairly potent, he says: “I took a leftover tablespoon of the infused coconut oil and put it in tea and it fucked me up, like, intensely.” Next he cooked the coconut oil with cocoa butter and squeezed the mixture through cheesecloth. The recipe yielded about a cup of lube. At room temperature it resembles candle wax, but when rubbed between your fingers—or elsewhere—it becomes oil.

The first time the couple used it, they applied it liberally—about two tablespoons. The recipe said it would take anywhere from 10 to 30 minutes to take effect, but it took Diane about an hour to feel body-stoned.

“I’ve never experienced anything like it,” she told me in a hushed voice as we drank coffee last week. “It felt like a knot had released and just relaxed.” Diane’s lady parts felt stoned, but the sensation didn’t affect the rest of her body. She said it removed any anxious thoughts about how she looked or whether Jack liked her, allowing her to focus on having fun.

When I blabbed about weed lube to female friends, they wanted to know if it tingled or made you numb. Neither. I tried it—purely for the sake of research, I assure you—and it’s almost like a mild muscle relaxer. It feels natural, lasts a long time and doesn’t get sticky like some store-bought lubes.

It doesn’t have much of an effect when applied to men’s genitals, though. As Jack reports, “I personally didn’t really feel anything from it, besides the fact that it was nice lube.”

For anyone who lacks a vagina, I suggest putting some on your lips, or other areas where blood vessels are close to the skin’s surface. It’ll mess you up in a good way.

On one occasion, after one of those insane winter storms had ended, I was eating a glorious Ace Burger with a friend at Gus’ Pub when it occurred to me that a small amount of the weed butter my friend had gifted me was in my purse. On a whim I smeared some on my lips and offered it to my pal, who did the same. In a matter of minutes we were giggling like maniacs.

The only drawback to using weed lube is it has a strong smell. The stench wasn’t noticeable during use, but afterward it lingered on fabrics. Be mindful of where you’re getting it on.

Also keep in mind that coconut oil can break down latex. So if you’re using condoms you’ll want to seek out the non-latex variety.

Trust me: if nothing else, simply having weed lube in your pocket makes for a successful pick up line. Have fun!


To make the cannabis-infused coconut oil, you need to decarboxylate the weed first. Spread 1 cup, or about 7 grams, of trim on a baking sheet. Bake at 240 degrees for one hour.

Combine the activated weed with 1 cup of coconut oil and 1 tablespoon of sunflower lecithin. Heat on low for 2 to 3 hours, stirring every half hour or so. Cool the weed-infused oil and allow to cool. Strain through cheesecloth.

Pour into a large mixing bowl. Add essential oils, if you want. When it begins to solidify, whip the weed lube until smooth.