Wednesday's 10 things you need to know 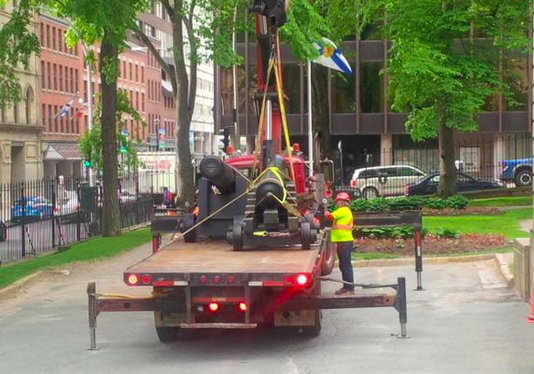 1
Two cannons were removed from Province House yesterday to restore their sandstone platforms. One, near the statue of Joseph Howe, was placed in 1829 and used to protect the Hollis Street entrance. The other, which was in storage, previously acted as Halifax’s noon and evening gun from 1882 to 1905. Some lucky communications worker got to write up this press release, which details the cannons’ wartime history.

2
Nova Scotia’s Auditor General says there’s a serious lack of monitoring on problem gambling in this province. A report tabled today from Michael Pickup’s office finds “no monitoring or prevention and treatment programs that meet standards Health and Wellness developed.” There remains a lack of monitoring in Nova Scotia’s aquaculture industry, as well. CBC’s Jean Laroche is live-blogging the report this morning, but you can read the whole thing here (if you have some time to kill).

3
The Polaris Music Prize brought their long list announcement to Halifax this year, and Mayor Mike Savage, Joel Plaskett and more helped with yesterday’s festivities at the Carleton. The list has a couple of locals on it in the running for the 50k prize, did your favourites make the cut?

4
South House, Dalhousie campus’ sexual and gender resource centre, is relocating to nearby Seymour Street next month and is looking for donations to fill up the new space. A lot of the centre’s current furniture has seen better days. If you have a clean couch, kitchen table, chairs, book shelves, local feminist art, books, zines or even a whiteboard that you can donate then contact volunteer@southhousehalifax.ca.

5
The province finally released its first Sexual Violence Strategy yesterday. The report comes after more than a year of research and consultations with dozens of community groups. The government is calling for nine community support networks across Nova Scotia to coordinate counselling. With the death of Rehtaeh Parsons on their minds, the government will place a new emphasis on reaching young people. Community service minister Joanne Bernard said yesterday that youths are at a higher risk of experiencing sexual violence, but have fewer services accessible to them.

6
Melissa Etheridge announced a solo tour to Halifax this fall. Tickets go on sale this Friday.

7
Several hundred people took time off from work to gather at the Central Library yesterday and talk some more about the Ivany Report. The Stepping Up: Let’s Take Charge of Our Future conference was an event “more like a pep rally than a formal conference.” So far, Halifax Police and the RCMP have made no arrests in connection with Nova Scotia’s cult of positivity.

+1 Sure Thing
As Stages Theatre Festival kicks off, celebrate, remember and dance with Stewart Legere at the opening of his show Let's Not Beat Each Other To Death, a play-turned-dance party that explores violence against the queer community in Nova Scotia and beyond.