Weathering the storm: How the changing climate affects our vineyards

After a late frost and a sweltering summer, Nova Scotia’s grape-growers discuss forging forward in the face of unpredictable conditions.

Meghan Tansey Whitton
This year’s record-breaking warm, dry summer gave grape-growers and winemakers a sweet taste of what climate change has in store for Nova Scotia. That heat came just after a freeze in early June—late in the season for a frost so severe—offered another, bitter, at what climate change will look like in our vineyards.

“There is no anymore,” says Ralf Wuhrer. “We’ve had an extremely hot summer. We could get a cold summer next time around. And the hot summer could be for nothing if that frost damaged all your buds.”

Wuhrer farms grapes at his family’s Stonehill Vineyard in Kingston in the Annapolis Valley. His father Walter, one of the three founders of the Grape Growers Association of Nova Scotia, planted the vineyard in 1983, on a south-facing slope on North Mountain.

“There’s definitely been a change—some good, some bad. We get nicer falls, but, for example, an early frost last fall damaged 20 to 30 of our delicate varieties,” he says. “It’s that one night that ends the game, and it doesn’t matter that you have three weeks of warm after.”

According to climate models, warm is where we’re headed in Nova Scotia, with an increase in heat units during the growing season, gains in the number of frost-free days and fewer cold snaps in the winter. These three trends were highlighted in a study released by the Nova Scotia Federation of Agriculture in March, but they have also been observed and anticipated by our grape growers.

“We used to get 18 [sugar units] at harvest, now we’re getting 22, 23,” says Suzanne Corkum of Sainte Famille Wines in Falmouth, who started growing grapes in Nova Scotia in 1979. “Part of that is the way we’re growing, but not all.”
John Warner of Warner Vineyards, the largest producer of wine grapes in Nova Scotia, says that the shift in varieties appropriate to Nova Scotia’s climate has been anticipated for a number of years in several of the province’s vineyards. “Climate change is occurring and opens up the possibilities for a greater range of quality grapes in the region,” he writes in an email.


Drier summers also bring “a unique opportunity for stressing plants into better wine grapes,” says Sean Sears of Petite Rivière Vineyards on the south shore, acknowledging that too much drought brings its own complications, like the need to invest in irrigation infrastructure (which is previously unheard of in Nova Scotia vineyards).

Sears also points out that Petite Rivière is a winery and will the economic impacts of the June frost because of its inventory, but grape growers who have one shot at nurturing grapes through to harvest will be much more deeply hurt by such extreme weather events.

Meghan Tansey Whitton
Such “extremes in temperature occurring at critical times in the growth cycle of the vine” will likely become more frequent with climate change and need to be planned for, according to Warner, who considers himself lucky that damage from the June frost will only reduce his crop this year by 15 to 20 .

Some growers were not so lucky, and the frost damage will impact their vines even into next year. But many report that their vines have bounced back, helped along by the ideal conditions of summer and fall.

“We fertilized and did other things, and we will have a crop, but not a big one,” says Corkum.

“Much of our vinifera is older, and had seen hardship in the past, and is now seeing good recovery,” says Scott Savoy, vineyard manager at Benjamin Bridge.“It’s in a good place for next year. With no fruit [this year], all the plant’s energy is put into wood and cane.” Thanks to its relatively large distance from the moderating effects of the Minas Basin, Benjamin Bridge was hit hard by the freeze in June.

These climate change-induced hardships are mild compared to some of the world’s more established wine regions, which collectively reported a drop of five in wine production in 2016 as a result of global warming, according to researchers at Brock University in Ontario.

Greece has seen lower productivity from labourers because of extreme heat, especially during harvest. Rising temperatures increase sugars and decrease acidity in grapes to such a degree that some European wine countries are considering until-now banned additives to keep their wines within social (and, often, legally) acceptable style. California wines are suffering from premature harvests yielding flavourless grapes and smoke taint from firestorms. Hail in Burgundy has led growers there to install a “hail shield” over the entire region, where generators blast particles of silver iodide into the air to prevent storm clouds from forming. A condensed growing season in Australia stresses winery equipment and winemaking logistics, with some wineries needing to refrigerate grapes for long periods before they can be processed.

As some of the world’s best wine regions become too hot or dry or hail-struck to grow good grapes, we see vineyards migrating, vying to take a place among new ecosystems and human populations. Habitat, soil health and freshwater supply will all feel the pressure to varying degrees, how these vineyards are managed. And, in the process, new regions for grape growing emerge, contributing fresh terroir to the world’s wine library.

Nova Scotia is one of these emerging wine regions, and this is largely due to a dedicated network of people capitalizing on our relatively cool, northerly climate—moderated by water on all sides—and taking advantage of a growing demand for low-alcohol, premium wines. In terms of the risks to the wine industry due to climate change, Nova Scotia is also uniquely situated to weather the storm. 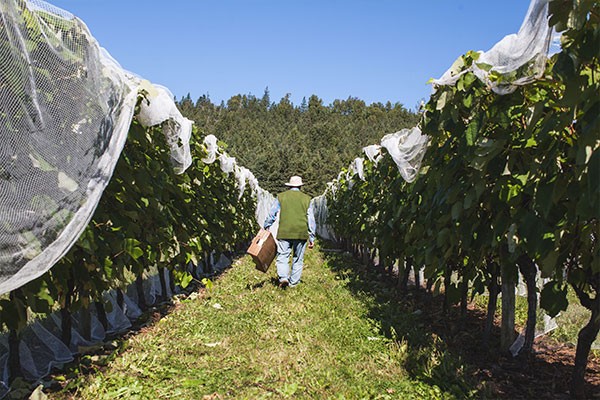 Meghan Tansey Whitton
Stonehill Vineyard's founder Walter Wuhrer puts in the work
“Is there a region like Nova Scotia that can withstand heat?” asks Jean-Benoit Deslauriers, winemaker at Benjamin Bridge, who has been crafting wine in the Gaspereau Valley for 11 years. “If there is one thing we can forecast, it’s that we do have some wiggle room to welcome heat units, and still preserve a freshness we can call our own.”

Too much heat reduces acidity in grapes. Acidity is an essential ingredient for any wine—it gives space and integrity to all the other flavours and sensations we love. Acidity—a big part of the freshness Deslauriers mentioned—is the hallmark of Nova Scotian wine; It is precious, and nobody wants to lose it.

“Extreme [weather] events are lessened by the Atlantic and the Bay of Fundy,” says Savoy. “Our long, drawn-out falls mean there’s not a huge shift in our style.”
“Winter ground moisture gets us into July,” he says, “just past bloom. August and September dry and triggers vines to ripen. And we can shed big rains because of all the streams and waterways.”

Water—a big contributor to climate moderation—may be our saving grace, but sea surface temperatures around Nova Scotia are heating up. The Gulf of Maine is one of the fastest-warming bodies of water in the world, warming seven times faster than the global average, leading to warm overnight temperatures (that lower acidity in grapes), high humidity (that breeds disease) and more tropical storms (that cause damage to vineyards).

The most consistent message from grape growers is the uncertainty ushered in by climate change.

“I don’t know what to do, because you don’t know what’s coming,” says Wuhrer, adding that he will likely install more sturdy trellises because of high winds in his vineyard.

“The hardest job for us is trying to predict how much fruit will come in,” says Savoy. Benjamin Bridge winery needs to plan logistics for harvest, but the biggest piece of the puzzle—how much of what kind of grapes ripened over the season—is still up in the air. “It changes every day.”

“Making predictions is fraught with difficulty,” says Bruce Wright, who started growing grapes on the south shore of Nova Scotia in 1982 and who co-wrote The Tangled Vine, one of the first books about grape growing in the region. “The best advice, I think, is don’t do anything yet. Be vigilant and prepared to react.”

Stories from around the world about grape growers meeting climate change’s various challenges reveal creativity and technological sophistication. Some are also choosing to become part of a more systemic reaction to climate change, reducing their ecological footprint and initiating conservation and sustainability projects. Many are doing both, recognizing that organic and biodynamic farming methods yield resilient crops and help mitigate a farm’s carbon footprint.

But climate change threatens even these choices. Historically high humidity in Germany, for example, has led some organic grape growers to turn to conventional farming, because they can’t stay within their certification requirements and effectively battle the new fungal diseases in their vineyards.
Still, Wright believes the farmer’s role is to keep track of weather patterns and try to make sense of the way things unfold.


Moira Peters lives, writes and chases her daughter around a vegetable farm on the Bay of Fundy. She occasionally leads tasting parties for people who like to learn about the world through wine.