We will have another Westray 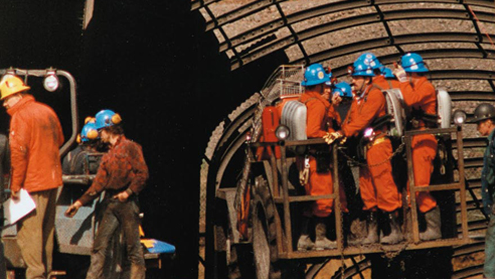 VIA THE NS MUSEUM OF INDUSTRY
The Westray disaster was Canada's worst mining catastrophe since the Springhill bump in 1958.


25 years ago the Westray mine exploded in Plymouth, Nova Scotia killing all 26 miners who were down below. It will happen again.

The last five years have seen an unprecedented attack on labour rights in the province. The Liberal government has passed at least nine separate pieces of legislation to limit the rights of workers to or bargain in less than four years. Before the Liberals, Darrell Dexter’s New Democrats shocked their base by revoking the right of paramedics to strike. Federally, the Tories engaged open class war against working people, and the softer rhetoric of the Trudeau Liberals has been accompanied by little concrete action.

Get into an argument with any pro-business bootlicker about unions  on the internet and you’re bound to hear some variation of the same refrain: “Well actually, unions served a purpose back when we had one-armed orphans working in Dickensian widget factories or when people were being blown up in mines, but they don’t make sense in the modern
click to enlarge

JALANI MORGAN
Chris Parsons (@cultureofdefeat) is a political organizer, health care activist and occasional writer from Halifax. His views veer hard to the left, and often stray into the territory of polemic.
economy.” These people are too busy savouring the taste of leather to that long-term care workers are more likely to become disabled due to on-the-job injuries than oil patch workers, or that whatever gains workers have historically won through unions have also been under relentless attack since the 1980s. Such healthcare workers have, of course, been the main target of provincial attacks on worker’s rights.

Even if you accept the weird premise that only workers in traditional dirty trades like coal mining deserve union protection, you should probably be alarmed by McNeil’s Liberal government's’ decision to amend the Construction Projects Labour act to make it illegal for workers on mega-projects related to extractive industries to strike because it’s bad for private profits.

The attempt to strip workers of the legal ability to fight back against employers is nothing less than the state picking a side. For some people worker’s legal rights, including the right to collectively withhold labour to ensure safe and fair working conditions, are less important than protecting private profits or keeping taxes low for corporations and high-income earners.

This year Donkin Mine re-opened in Cape Breton. It is the first operational coal mine in the province since 2001. Despite evidence that dramatically improves safety in coal mines, the mine is operating union-free, just like every mine operated by Chris Cline, the billionaire American coal baron whose company is running Donkin. As reporter Katie Toth documented with nuance, Cape Bretoners still have deeply complicated and ambivalent feelings about the return of coal mining.

The public was only made aware of the sordid details of Donkin’s operators because two journalists who were on strike went digging. Frances Willick and Michael Gorman revealed that Cline had hired a former manager of Massey Energy to oversee Donkin. Massey Energy, owned by Don Blankenship, was responsible for the worst American mining disaster in 40 years when a mine in Whitesville, West Virginia exploded killing 29 coal miners. Amazingly, Cline called Blankenship “one of the most talented leaders” in the coal industry. Cline himself has a safety record which can be shocking to read.


Whitesville is the kind of Appalachian town which has dominated the American political imagination for the last 12 months. The town and its surrounding area also very much resemble many of the former coal mining communities in Nova Scotia: trying to reinvent their economies amid outmigration, reeling from the loss of mining, battling opioid addiction and inadequate access to healthcare.

For many reasons—including the strength of Nova Scotia’s tourism industry and the stabilizing effect of Canada’s federal welfare state—Nova Scotia has not sunken to the level of desperation that has wracked West Virginia, but we’re desperate enough to turn to the same industry and the exact same operator that numerous coal counties across the United States have turned to.