We need to win back America’s trust, says Canadian ambassador

David MacNaughton believes failure is not an option in dealing with Donald Trump’s “anti-trade rhetoric.” 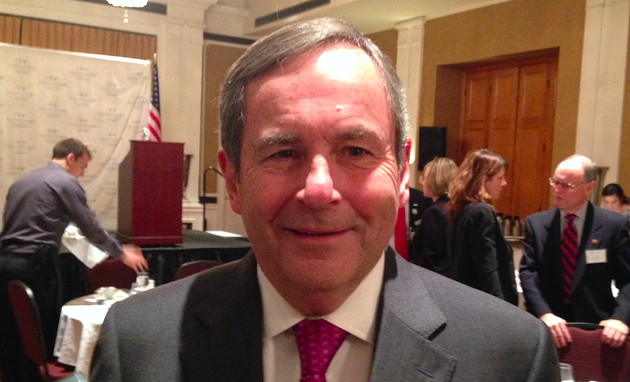 THE COAST
David MacNaughton is Canada's ambassador to the United States of America. Good luck to him on that.

Canada’s top priority in Washington is selling itself as a trusted partner to Donald Trump.

That was the message given by Canadian ambassador David MacNaughton during a Halifax Chamber of Commerce luncheon held Friday afternoon.

“We need to convince them we’re a trusted partner,” said MacNaughton, adding that Canada has been taking its relationship with the United States for granted.

“I often say it’s like having a best friend or a marriage. If you take it for granted, it doesn’t last for long.”

Though he hasn’t met with Trump himself yet, MacNaughton told reporters he’s had “many discussions” with the president-elect’s people both before and after the election, and is hopeful the two countries will continue working closely together.

That’s despite Trump’s promises to renegotiate the North American Free Trade Agreement (NAFTA), back away from emission regulations and support military and economical policies that are largely at odds with the goals of prime minister Justin Trudeau’s government.

“It’s true that NAFTA was described in perhaps...less than flattering terms during the US election,” said MacNaughton, who nevertheless reiterated recent comments that Canada would be happy to open up and revise the trade agreement so long as it was in the interest of Canadians.

“Certainly, some of the anti-trade rhetoric in the election is going to mean we have to do a better job educating Americans about how important trade is with Canada,” said the ambassador.

Failure on that front is “not an option,” according to MacNaughton, who has already warned Trudeau that the status quo between Canada and America is going to dramatically change.

“We know of course this is challenging time to be working in trade...Despite the depth of our trading relationship with the United States, it’s not immune to protectionist impulses.” —David MacNaughton

The statement, and MacNaughton’s comments about opening up NAFTA, have provoked criticisms from both political rivals and opinion columnists—particularly regarding the sexist remarks and racist fears that Trump stoked during his election campaign.

MacNaughton had less to say on that subject during Friday’s speech. He did tell the crowd that one of his daughters, a teacher, had been hearing racist remarks from some of her students since the election. The ambassador also stressed that it’s never been more important for Canada to “reinforce the values that we share as Canadians, and that is inclusiveness, generosity, tolerance.”

Trudeau appointed MacNaughton to represent Canada in Washington this past spring. He previously served as president of Public Affairs International, and was the Ontario co-chair of the Liberal’s election campaign. MacNaughton also served in Dalton McGuinty’s Ontario government with Trudeau’s principal secretary Gerald Butts.

“Every day we’d get briefings and it would be one problem after another,” MacNaughton told the Halifax crowd about his time in provincial politics.

Those constant briefings could get quite depressing, the ambassador said, but he recalled telling Butts that they could either look at them as problems or opportunities. It’s a mindset he maintains in Washington.

“I can tell you, we’ve got lots of opportunities now.”