Patrick Baxter has helped make some of the scariest on-screen faces of the past 20 years—now, he's here to tell you how to get ghoulish, stat. 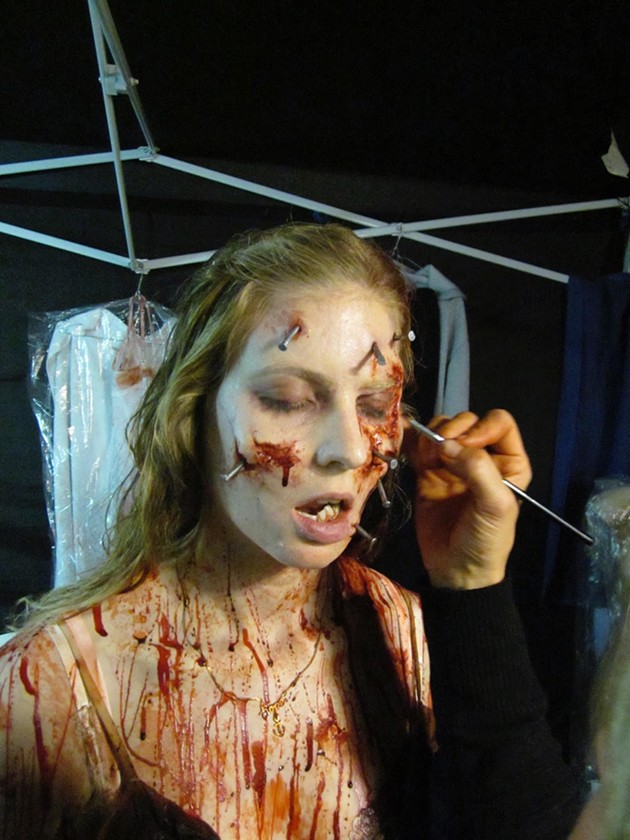 Patrick Baxter
On set of Evil Dead, where Patrick Baxter was one of te make-up effects artists bringing the horror to nail-marked life.

Patrick Baxter has loved the magic of movie makeup since he was “six years old, when I saw Star Wars. It’s still my favourite movie of all time. All those creatures at the cantina? It was unbelievable!” Or perhaps his headlong fall began a little later: “I actually saw the original Salem’s Lot as a little boy and that terrified the hell outta me,” the make-up effects artist says, speaking by phone, an hour before heading on set to build faces and maybe even prosthetics for the Halifax-shot Chapelwaite—a TV series based on a Stephen King short story, starring Emily Hampshire and Adrien Brody.

In the time since those early films made their mark, Baxter’s been making his—working on makeup effect crews for flicks History of Violence, “all three of the Hobbit movies”, 2013’s Evil Dead and Freddy vs Jason (to name a few). “I love the fact that you get to create a character from someone’s imagination—it may not even be yours,” he says. (He’s come a long way since working at the Park Lane movie theatre, saving up to study make-up effects at a post-secondary level.)

“I remember reading Books of Blood in Halifax when I was a young kid. And last year, I had an epiphany of 'Wow, how cool is that that I read those books as a teenager in Halifax—and now I’m working on this movie, being made where? In Halifax. It came full circle,” he adds—showing that life can indeed imitate art, right down to a satisfying narrative arc.

Here, he shares three quick tips for anyone who wants to try their hand at a bit of wash-off wizardry, just in time for any socially distant Halloween happenings on your calendar:

Patrick Baxter
A zombie look Baxter created for 2004's Dawn of the Dead.

Start with some liquid latex.

“You could, right now, go down to the Nova Scotia College of Craft and Design store and buy a little tub of liquid latex—and that’s what a lot of kids start with is like, doing stuff like liquid latex. A lot of people will pour a little out, take a sponge and stipple it on their face,” Baxter says. From there, he explains, you can pull your skin taught and dry the latex with a blowdryer to produce intense wrinkles.

Build on top of a latex base.

Once you’ve graduated from using latex alone, it’s time to add texture: “You can also stipple some on your face, dip the cotton balls in the latex and they’re malleable at that point so you can sculpt with it—make the dramatic cheekbones or a longer chin,” says Baxter. Another option? “It’ll take forever to dry, but a lot of people will take toilet paper and tear it and use the latex on their face with that and that’ll create zombie skin.”

“If you wanted to do a zombie thing, you take some instant coffee, and add some drips and drops of water. You don’t want to just turn on a faucet and put it under; you want to strategically put in incremental amounts of water. It’ll create a slurry,” Baxter says. “A really weird brown, darkish colour and it makes really neat zombie blood or a grossness that could seep out of these holes.”

Another standby for experimentation Baxter suggests? Those cheap Halloween makeup palettes that abound at drugstores this time of year: "There’s different colours that they have in a palette at Shopper’s Drug Mart—red, blue, yellow and green—and you can take those colours and mix. That’s one thing I find with artists that are getting into makeup: Everyone’s afraid to experiment and just mix colours up and try different things and you’ll learn from your mistakes. You’ll learn to do it better each and every time. Each and every time you’re building your confidence up. It’s all about having fun. “