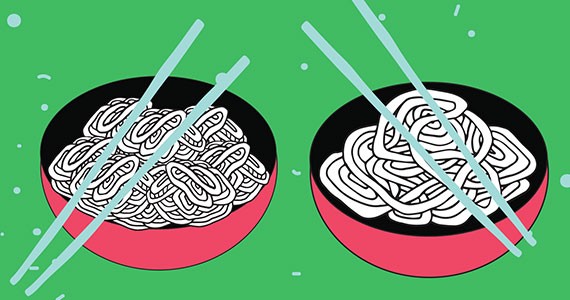 Jamie MacAulay has always been a self-proclaimed “ramen nerd.” When a space on Charles Street became available, it only made sense for him to look into opening his own noodle bar. “It’s a really appealing comfort food,” says MacAulay. “It hits all the notes, you know—comforting, warm broth, a nice piece of braised pork and egg in your soup, noodles.”

MacAulay’s first experiences in the food industry involved washing dishes rather than cooking. He’d originally planned on a career in graphic design—but when that didn’t work out, he shifted gears and put his focus back on food.

“Once I decided that, I sort of jumped in with both feet,” says MacAulay, who spent six years doing an apprenticeship in Whistler. These days, MacAulay’s teamed up with his wife Shannon Mcmullin along with friends Stephen John MacLean and Craig Nickerson to open Water and Bone at 5687 Charles Street, the former home of Chi Bistro and Tess.

MacAulay stresses they’re not trying to “create a Japanese ramen experience,” but they want to pay respect to the tradition and craft while having fun with appetizers and entrees. The menu will feature dishes made from local and seasonal ingredients, particularly when it comes to the base of the soup. Instead of toasted nori, for instance, they’re using dulse.

“We’re not going to use imported seaweed from Japan, ’cause why bother? It washes up in my backyard,” MacAulay says, laughing. He’s not literally serving the seaweed from his backyard, but you get the point. Pork and chicken from local farms and homemade noodles are also part of the spread.

“We really want to stick with local, but respect the tradition,” he says. MacAulay doesn’t have a firm opening date just yet, but he aims to have Water and Bone open in the next two weeks.